Wow! A sunny day! It's been so long I'd forgotten what sun looks like! 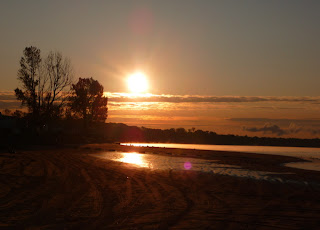 It was cold when I got up this morning 1C (34F) however shortly after I started my walk the sun rose and it made for quite a nice day with a high of 11C (52F).

I may have given the illusion that the trail that I pictured yesterday is a shortcut to the beach, actually it is a shortcut of sorts but as you'll see from the following two photos there's still a ways to go to get to the water. 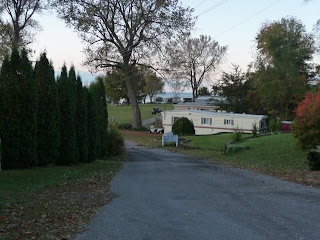 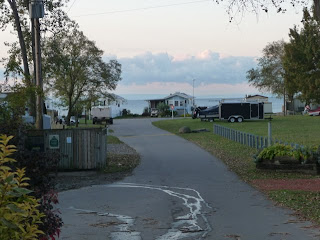 Here are some park model photos

This one has some pretty fall leaves around it 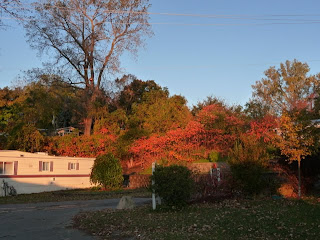 Another one in a beautiful setting high above the lake 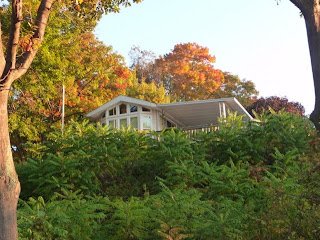 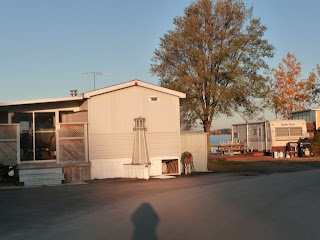 These are across the street from the water 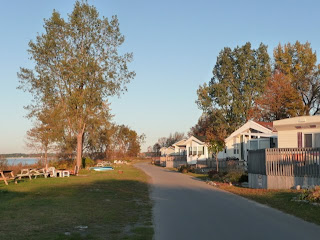 The ones facing the water have some awesome decks! 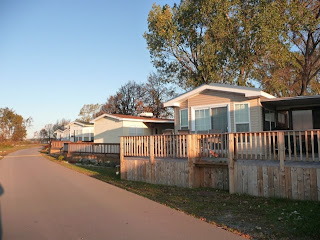 Most of the morning was spent on the computer again although the campground wifi was too slow to get into today. There are quite a few people here for the weekend so back to our own internet satellite.

I couldn't get moving today. I had planned to go in to Fort Erie to pick up some things but didn't have a lot of energy so I lay down to read and had a brief nap. After an early lunch, I went in to town. I made several stops, one of which was to see if the flu shots were in. The walk in clinic had a sign on the door that they have them but are only giving them to age 65 and over at this time. Hmmm wonder if they would make an exception for us since we're leaving. That being said, it looks like we won't be leaving till Thursday.

Gordon called the campground in Lebanon, OH (close to Dayton and Cincinnati) and they are fully booked for this weekend due to an annual Hallowe'en party so we've decided (subject to change) to leave on Thursday instead and spend three days in Columbus and arrive at Lebanon on Sunday. Lucky our plans are cast in jello!

Today is my cousin Terri's birthday. She lives in England. Happy Birthday, Terri! Have a jolly good time!
Posted by A couple of newer paintings 2019 at 5:10 pm