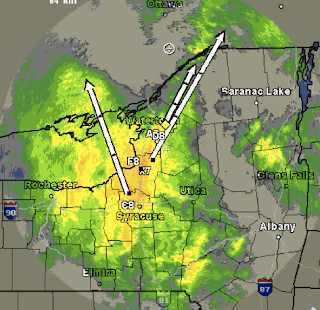 So I finished up laundry that I started last night, did some repairs on some clothing while I had my sewing machine out, spent time on the computer and read. I found another game on Facebook that I've always liked. It's called Pyramid Solitaire. Since I'm running low on credits with Bejewelled and they've been cheap about giving me points lately I decided to find something other than Pathwords to play.

Speaking of sewing, I was in Walmart on Monday. They've downsized their sewing/crafts section. There's no more bolts of fabric. They have some packaged but not much selection. Anyway I was looking for tailor chalk. I couldn't find any so I asked a young clerk and she told me she'd never heard of it! I guess sewing isn't catching on with the younger crowd. Not that I consider myself a seamstress of any kind but I used to make some clothing years ago before you needed a university degree to read a pattern and I can do some repairs. Anyway, I guess it's becoming a lost art. My mother was a good seamstress. She made all our clothes when we were in school and I remember her making me a suit when I first went to work in Ottawa when I was 18. She was also an amazing quilter! That, I'm not, I'm not a big fan of sewing by hand.

Late this afternoon it started to snow. It was melted on the road but sticking to the grass. Our first winter wonderland for this year! The temperature also went from the 11C (53F) that it was when I got up this morning to 0.3C (33F) before 5 p.m.

I had planned to go to the Real Deal to work on my lamp this morning. I was out of the house early so stopped at Sears to pick up a parcel and also stopped at the hardware store to get some tile set for the lamp, I was still early so went to the grocery store.

The lady who was supposed to be there wasn't at the Real Deal so I just picked up my lamp.

From there I headed downtown. I needed new sneakers so I stopped at the shoe store. They are so nice there and very helpful. Mind you the shoes cost an arm and a leg. They take an imprint of your foot like they do when you're measured for orthotics and they keep a file on you as well. I wound up getting some nice shoes. My heel doesn't hurt when I walk in them. Unfortunately they're a discontinued style but there are hopes for them to come back in again.

The package I picked up at Sears was a new jogging suit for Gordon. The ones he has are in really bad shape. Now he wants one in every colour! He can always use them as he lives in them!

This afternoon we went out to the local Salvation Army Thrift store and bought an old fashioned end table for the basement to put my lamp on. Guess I'd better get working on it!

We were having some light snow as I headed out in my new sneakers this morning. They really are comfortable. I've never spent that much money on shoes before but it appears that they are worth it!

Over the past month of so I've been trying to figure out why I suffer from periodic nausea (other than from reflux) and intestinal distress. By process of elimination I thought at first it was applesauce but that didn't seem right so I kept thinking and it seems that when I eat the homemade bread (which has 2 eggs in it), I get symptoms. Last night I went on a mission to find a recipe for bread with no eggs. I did find one so this morning we went out and I picked up the ingredients I was missing at the local health food/bulk store.

It turns out rather pale (maybe I'll use brown rice flour next time instead of white) and it's not great but it is moist and toasts up pretty well. It's an oven made loaf rather than breadmaker but it's quite easy to make thanks to my stand mixer. So we'll see if I continue to have symptoms. While I was baking I made some egg free blueberry muffins. I used 1/2 a banana in place of each egg. They turned out ok, again, not great, but ok. Now I'll have to figure out how to make the peanut butter cookies without egg.


While we were out this morning we did a little driving around the back roads just southwest of Smiths Falls. It wasn't a great day since it was mostly cloudy and a little snow was falling but it was nice to get out in the country.


This afternoon I settled in to read and have a snooze.
Posted by A couple of newer paintings 2019 at 4:39 pm 4 comments:

The wind really picked up this morning! After lunch I headed out to the library and then on to the Real Deal.

There were six people (that's all they had room for) for the repurposing workshop and four people to show what they've done. After that they had a collection of old lamps that were pretty ugly so we each took a lamp to refurbish. I'm using my broken china to refurbish mine. It's going to take a while!

It was snowing and the sun was shining when I set out for my morning walk. Only the sidewalks had snow on them as it was melting on the roads so I put on my ice grippers to be sure I didn't fall on my knees again. They still haven't recovered 100%. The temperature was -0.5C (31F) but there was a good wind so it was chilly!

I had a bunch of sewing jobs to do so I got my sewing machine out. We carried it with us for over five years and I only used it once or twice but I'm glad I didn't get rid of it. I got a couple of projects completed.

This afternoon I had my first volunteer job. There is an annual Scotch Tasting fundraiser at the Canal Museum tonight and my job was to help set up for it. I got tables and chairs out, then set up tables, washed tables, set up chairs, washed chairs, put on tablecloths & centrepieces. I was there for two hours and didn't stop the whole time I was there. By the time I got home my heel was ready for some ice and a rest.

It was -0.9C (30F) and cloudy this morning. The radio said there was a wind chill but I didn't feel much wind but I had put on my heavier coat this morning so that helped. The ice grippers make a great cushion for my heel when walking.

Gordon went out this morning early and took a photo of the Holiday Train that arrived here last night. They collect food and money for the Food Banks across Canada.

Other than my walk I didn't even stick my nose outside today. I was mostly a couch potato reading. I did do some cleaning and made bread. Very exciting day!

What a beautiful bright sunny morning! The temperature was -0.2C (28F) but it was still nice for a walk.

If we're not doing anything Monday morning I like to go out to the local grocery. They often have good Manager's specials on Monday mornings. So off I went on my Monday morning shopping. Most of what I picked up was groceries but I did manage one small Christmas gift. I had planned to go to two more places but my heel was starting to give out on me so I came home.

I've been experiencing a lot of abdominal pain over the past couple of months. It seems to come and go so I've been blaming it on food. Also this time of year has always been bad as I always felt somewhat ill when we first left Canada for a few weeks so I'm not sure what the problem is now. If it keeps up much longer, I'll have to find a doctor here or go to mine in Ottawa. I hate making appointments in Ottawa when you don't know what the weather is going to be like on the day of your appointment. Maybe I'll try the clinic here.....

It was cloudy this morning but a decent temperature at 0C (32F) for walking. My heel was hurting so I only went out for 15 minutes. It hardly seems worth it to get dressed for the outdoors for 15 minutes but I feel like I need to keep moving!

I feel better this morning than yesterday so hope that continues to be the case.
Posted by A couple of newer paintings 2019 at 10:28 am 2 comments: