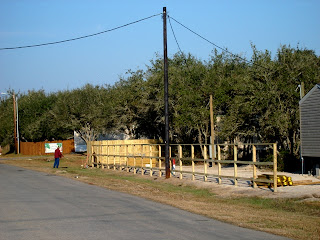 The guys are building a new fence around the new part of the park where people are putting in park models.


This morning was 45F (7C) and sunny with little wind for my walk around the neighborhood.

Gordon went out for sunrise but other than that we just stayed home today. I got the laundry done and used my new external hard drive to get my back up done. I also updated our expenses into my spreadsheet.

It reached 68F (20C) today and was bright and sunny all day although the wind did pick up a bit during the day. That’s it for our day!

I was up at 6:15 a.m. today and it was 31F! Gordon had turned the water off overnight and was gone to take sunrise photos.

We had an appointment in at the local Dodge dealer for our regular truck service. This is about the first time that we reached the three months before we reached the required mileage. We were back around 11:00 a.m. taking the scenic route and saw three sandhill cranes but we didn’t stop as Gordon didn’t have his camera.

After lunch, a nap and my walk that pretty much ate up the afternoon. It was 50F (10C) at the high point today but very bright and sunny all day.

Late this afternoon we headed over to FM1069 (Farm Market 1069) which is the road where we see the sandhill cranes. We took this route back from this morning. We saw lots of cranes both on 1069 and 188 on our way to Bayside where we DIDN’T see any roseate spoonbills. All the birds are still hiding from the cold. 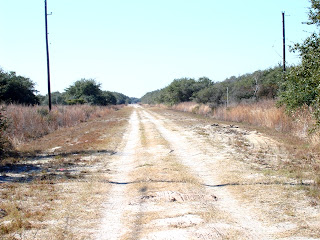 When I say the pavement ends on Lone Star Road, it really ends! 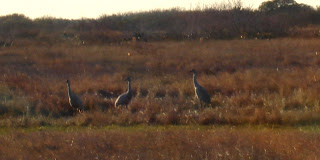 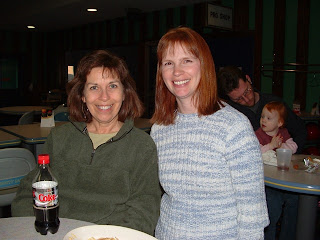 Gordon's sister, Carol (left) sent this photo today. Beside Carol is Gordon's daughter, Michelle and in the background his son, Ian and Ian's daugher, Lilly
Posted by A couple of newer paintings 2019 at 7:32 pm No comments:

We Have a New Microwave! 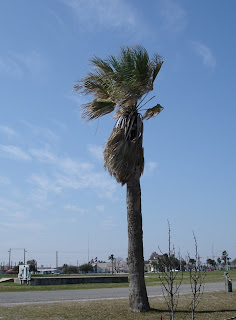 The wind in the palm(s) at Rockport 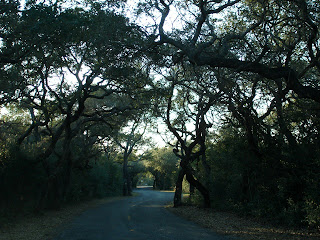 Driving through the live oaks at Lamar 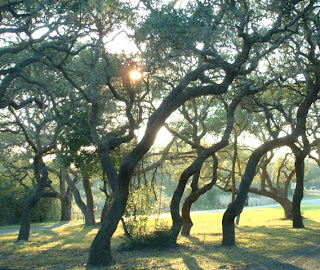 Late afternoon sun in the live oaks at Lamar

We got our new microwave installed and were headed back to Fulton Oaks RV Park by 9:50 a.m. having cost us only an hour’s labor. We were set up again by 11:15 a.m. and headed to Taco Bell for a celebration lunch. We then drove around the Bay in town but although the sun was now shining brightly, most of the birds had elected to find a warmer spot so we headed back to the RV and had a nap. I had a horrible dream. I dreamed that State Farm Claims in needed help and I went in to help them. For those of you that don’t know I spent 26 years as a Claims Adjuster at State Farm in and hated pretty much every second of it!

After I woke up from my nap, I took my morning walk since I hadn’t taken it this morning. Again, nothing to see except a cardinal and the guinea hens that we saw a couple of weeks back.

Late this afternoon we took a trip over to Lamar and but again although the sun was shining brightly there wasn’t much around but it was a nice drive. The high today was 50F (10C).

YUK! Back to 40F (4C) weather and cloudy although there were a few sunny breaks here and there.

After breakfast, I made a trip to Walmart and got a roast of beef to cook in the crockpot for our Valentine’s Day dinner. There was a Valentine’s Day dinner dance here at the campground for tonight but I didn’t sign us up as we have to be up very early tomorrow to pack up and go to Camping Clinic for them to install our new microwave. Since we don’t have a fan above the stove right now, Gordon seared the roast on the barbecue – it worked really well! I expect this won’t be news to our brother-in-law, John who bakes on the barbecue.

We got some outside things done today in preparation for going to Camping Clinic tomorrow – tanks dumped, awning up etc. After that we went for a drive to Bayside taking the route where we usually see the sandhill cranes and again we saw quite a few but they were quite far away. Gordon got some of them flying, I think. There weren’t any birds at Bayside as it was so cold. We did see some on the way there and back but they were quite far away. When we got back to Rockport we walked along which runs along the Bay. We hadn’t walked there before. It was cold! Our high today was 50F (10C) but with the wind it felt colder. I walked a bit around the park when we got back to the RV. About all I saw were some black bellied whistling ducks.

Oh, and my camera is okay. It just needed to be charged! 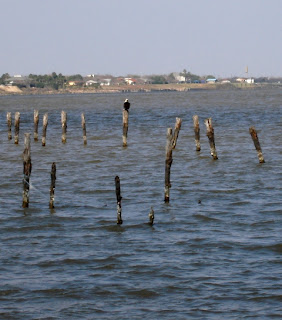 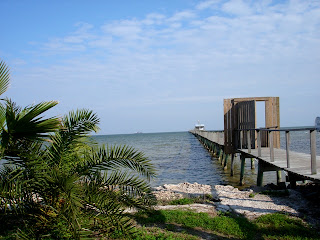 A fishing pier along Water Street 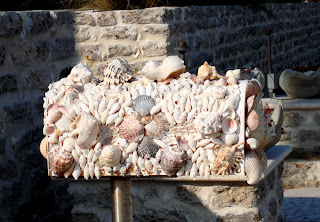 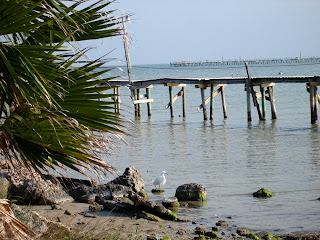 An egret and a fishing pier along Water Street 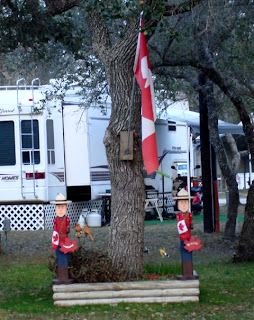 This display is outside an RV from people from Orillia, Ontario here in our park
\
Posted by A couple of newer paintings 2019 at 10:43 am No comments:

This morning was bright and sunny and 56F (13C). I set out for my walk with my camera but when I went to use it, it wouldn’t work so I cut my walk short and returned home to read the Troubleshooting manual. I had also started charging the battery. The manual said to take the battery out for one minute and then put it back in so I took it out of the charger and put it into the camera and it worked.

Since it was a nice sunny day, after lunch we headed over to Port Aransas. We tried to find a sunset dolphin watch cruise but no luck so on to the Leonabelle Turnbull Bird Sanctuary where I took a couple of photos and my camera failed again. Gordon said that he thought it sounded like the battery was dead so I put the camera away and just enjoyed the day. I have lots of bird photos anyway. We went to the beach, the jetty and and then headed home. My battery is charging. Sure hope that’s all it is! So, no photos today.

New Hair Do and Some Walking

It rained a bit during the night last night and this morning was much warmer – 58F (14C) and partly sunny. I got up a little earlier as I had a hair appointment this morning. While I was getting up, Gordon was leaving to go and take photos as it’s the first bit of sun we’ve seen in three days.

I arrived early for my hair appointment and was taken right away. The salon is actually closed today but Melissa came in for me and a couple of other people so it was nice and quiet. I got my hair colored, cut and styled and this time after about 1 ½ years of procrastinating, I had her give me bangs! It will take a while to get used to having something on my forehead again! 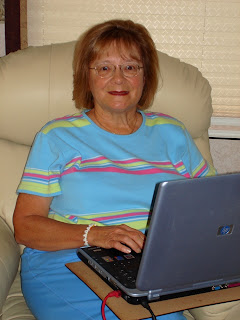 I stopped at Bealls on my way home to see if they had any new sandals in but everything looked the same as it did last time I was in.

After having lunch at home, Gordon and I headed out to do some walking. We stopped at Connie Hagar’s Cottage Sanctuary and walked a bit around there but it had gotten warmer today and more humid so the mosquitoes were out in force. We also didn’t see any birds, the wrong time of day, I expect so instead we headed over to and walked along the Bay side on the way to the fishing pier and on the beach side on the way back so I think we’ve gotten our exercise for today! 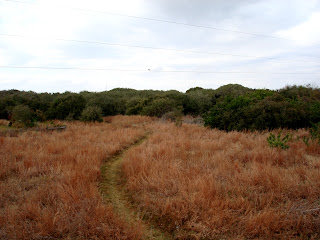 One of the trails at the Cottage Sanctuary 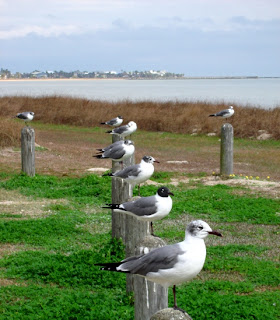 Birds all in a row at the beach 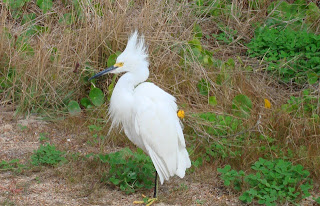 
The temperature got to somewhere around 70F (21C) today but it was mostly cloudy with only a few sunny breaks. At one point when we were walking on the beach it looked like we might get some rain but we were home by the time we got any rain. 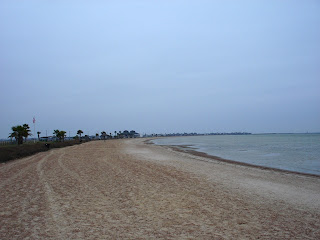 This morning Gordon decided today that it was too boring to walk around here so we drove to . He headed to the harbor to take photos and I headed down the beach to walk. It was cold – 49F (9C) but I was dressed for it. I walked along the beach side for a ways then walked on the Bay side. It was quite a good walk. There weren’t a lot of birds out but I did see a heron and all kinds of gulls and terns and a few oyster catchers. The photo is of .

This afternoon I headed over to Walmart to pick up a few things then drove back along . There were a lot of waves crashing against the shore but it didn’t seem that windy.

When I got back I went for another walk around the park but that’s about it for today!