It's been cold and windy all day today but we did have sun for a change. The wind was strong enough that it reminded me of my morning walks in Texas. 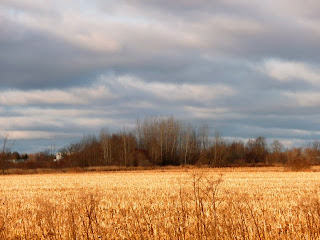 I spent most of the day on the couch reading. I did get some of Nancy's Christmas decorations out but we didn't do anything with them yet.

Nancy is having a couple of girlfriends over tonight and they're bringing dinner. Unfortunately neither of us can eat it so it's regular fare for us! So since we found out there was at least one smoker in the company (Nancy goes outside to smoke), we decided to go out for dinner since both of us can't tolerate cigarette smoke.

We wound up going to the Bella Vista (the restaurant we had planned to go to on our anniversary). Gordon says their gluten free pizza is the best. I had scallops with rice (wasn't much on the menu that I could eat) and the scallops were very dry. It came with Greek salad so after picking out tomatoes and feta cheese, I had lettuce and black olives but it was ok. I'm getting used to it!

After dinner we stopped at a Mall that we don't get to very often but I guess it's not close enough to Christmas yet as it was closed so we drove to downtown Ottawa and then into the market area coming home via the Ottawa River Parkway and stopping at the Walmart in Kanata for something to clear the smoke. I have to say it doesn't do a very good job.

I can remember when cigarette smoke didn't bother me and when we came to Nancy's I wasn't aware that it did, it's been so long since we've been around smokers indoors. It makes it hard to breathe and makes me extremely nauseated and Gordon's been coughing quite a bit.

Since it's open here at the house from upstairs to downstairs we had the bathroom and bedroom closed off so just went to bed when we got home, consequently no blog got posted last night, so here it is!
Posted by A couple of newer paintings 2019 at 3:56 pm 1 comment:

It was raining this morning so I didn't go for my walk and we had to get ready to go to friends of ours about an hour away for 11 a.m.

Before we left Gordon took this photo of Max and I on the couch. He's such a sweet dog. 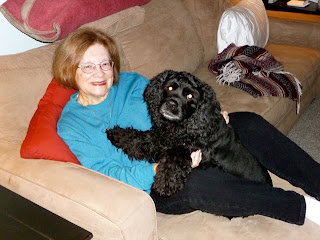 We left just before 10 a.m. It was raining here and we ran into sneet, snow and more rain on our trip to Perth, ON.

Some sneet on the windshield 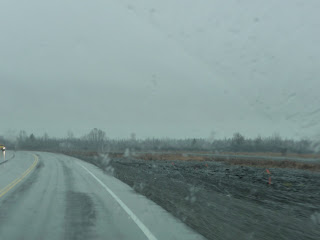 This is their house and what a beautiful house and in such a lovely area! 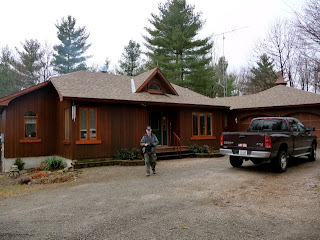 This is Shonagh and Dave. They are the owners of our favourite campground in this area and we consider it our home campground. Shonagh prepared a delicious meal for us, keeping in mind our problems with food. 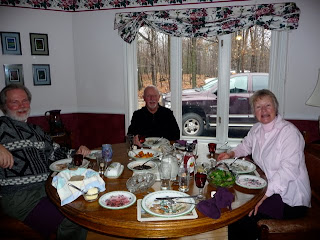 This photo was taken looking out the window from their family room. 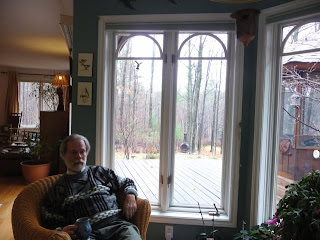 After lunch the rain stopped for a while so we went for a walk around the area. There are many trails and beautiful spots. Even though it was cloudy it was still beautiful. 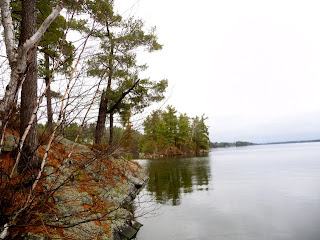 An interesting tree. I liked the angle. 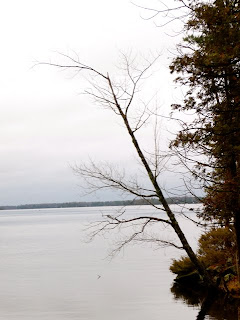 We had a very enjoyable day with wonderful company. It was dark when we got home and Nancy was already home but she was going out tonight so we're puppy sitting.
Posted by A couple of newer paintings 2019 at 5:35 pm No comments:

The sun actually shone this morning while I was out for my walk. It was already 7C (45F) at that time and was quite warm although cloudy for the remainder of the day. Rain was forecast but we didn't get any. Our high was 11C (52F).

It was also sort of hazy this morning as you will see reflected in some of the photos below. 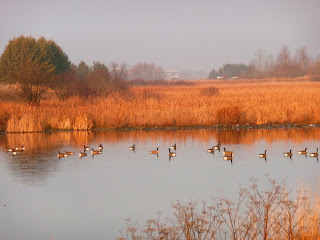 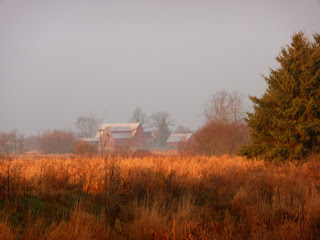 This little bush still has leaves 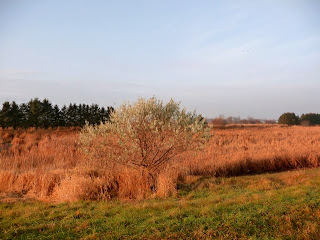 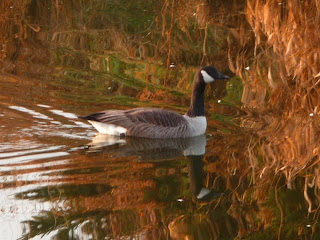 I got ready and was out the door before 10 a.m. today. I had some shopping to do and I was meeting a friend of mine, Linda for lunch at the Carlingwood Restaurant at Carlingwood Mall for lunch. I haven't seen her for about 17 years. We had a good catch up and will probably see each other again this winter.

Photo below of us taken by the waitress 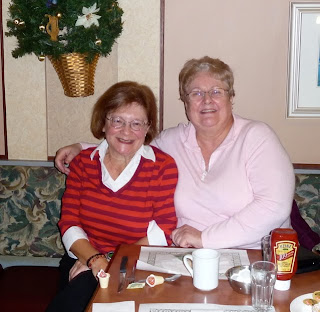 After lunch I had more stops to make and was home in time to make up some burgers (requested by my husband) so he could BBQ them, some fruit salad (for me) since I had a big lunch and do some reading.
Posted by A couple of newer paintings 2019 at 5:13 pm 3 comments:

Wednesday November 25, 2009-Only a Month till Christmas!

Hard to believe that it's nearly Christmas. This year has gone really fast. It seems the older you get the faster the time goes.

Today was fairly warm for this time of year at 7C (45F) but it was dull and rainy. It did stop long enough for my walk this morning. I didn't take my camera so no photos today.

Most of the day was spent lounging around reading and on the internet.

I had bought some sirloin steak yesterday (it was on sale so cheaper than round or blade) so made some swiss steak for dinner. It turned out pretty well but probably could have baked it a little less.
Posted by A couple of newer paintings 2019 at 4:05 pm 1 comment: 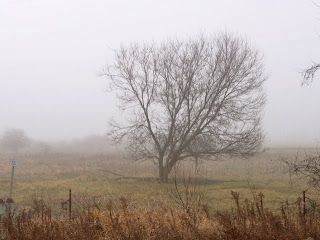 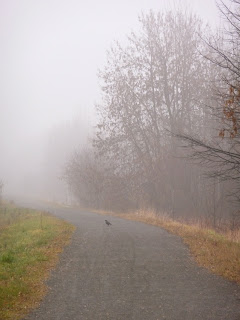 I hung around the house all morning and read my library book. I've read it before but I enjoyed it so decided to read it again - it's Colony by Anne Rivers Siddons.

After lunch I went out to pick up some groceries. Gordon was out of orange juice so that was the main reason that I went out but of course when I got there I found other things that we needed. When I got back to the house I picked up the mail and the lawyer in Buffalo had sent something I needed to sign before he can proceed with the case. So I signed it and drove over to the post office to get it mailed.

We have had other fulltiming RV friends turned away from the border today. This is getting ridiculous! Do the border agents have something against RVers or just specific ones?
Posted by A couple of newer paintings 2019 at 6:44 pm 1 comment:

The day started out rather foggy and we only had a brief period of sun this afternoon. I didn't get to go on my walk today since the housecleaner was to come at 8:30 a.m. However she called and said she wouldn't be there till 10 a.m. I still didn't go on my walk.

After breakfast I went out and did some shopping and then Nancy and I went out this afternoon. She gets every other Monday off since her hours are long the other days.

Today's good news is that my sister is home from the hospital! I haven't gone into much about it here on the blog but she had a very serious operation and we're so thankful that she is now home. Thanks to everyone on Facebook who said prayers for her.
Posted by A couple of newer paintings 2019 at 7:23 pm 2 comments:

I've added a new blogger to my sidebar. George and Marilyn have recently also had problems with US Immigration, to read about it, click here. Luckily they were able to get things straighteed out and were allowed to cross the border and continue on their way within a couple of days.

Not much happened around here today. It was supposed to be bright and sunny but I didn't see a hint of sun all day. It wasn't cold though.

Other than going out for my walk I just sat around the house and read and watched TV.
Posted by A couple of newer paintings 2019 at 3:03 pm 1 comment: