I woke up to rain so stayed in bed for a while longer listening to the rain and the radio. By the time I got up I had a headache so whether it's from staying in bed or atmospheric pressure, who knows? 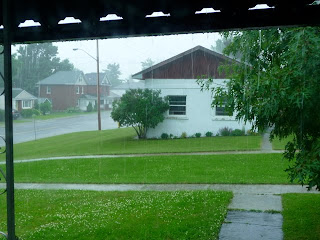 Thanks to Alfreda for identifying the Virginia Creeper as my plant growing on the shed. I'll quit looking for clematis flowers now! LOL

It appears that everyone must have a life but me. No one is doing Jigzone puzzles anymore. I still do one every morning and sometimes more during the day. They're kind of fun and it keeps me off Bejeweled for a while. I should stop altogether and get at the basement!

It seems that not only did we have a major earthquake in this area yesterday but the pretty little town of Midland on Georgian Bay that we visited last summer when we stayed in Orillia was hit by a tornado. It took Environment Canada a while to determine that it was a tornado but one look at this photo would have told me! 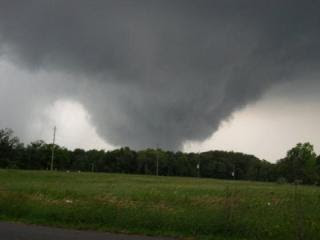 After a shower, I started on the basement, three more boxes emptied but there's still lots of stuff I can't find!

Gordon used to do a newsletter every so often after he moved up here in 1990 to send to friends and family in the U.S. He still has the soft copies but unfortunately the programs that he used to compose them don't work on the Intel Mac so he's been trying to find a way to open them so we can determine when we crossed the border since 1992. We need this for the Immigration lawyer, I have no idea why as they should have records of when we crossed the border. We always show our passports. Anyway, Gordon wasn't having any luck but he did have text files. So my job has been to go through the text files and take out all the gibberish that would have been photos and formatting etc in the original files.

That kept me busy today until we left to go to Ottawa. We were going to my sister's for dinner as it is my nephew/godson's 25th birthday today. Quite a milestone!

We had some errands to run first so arrived at their house around 4:30 p.m. Nick and Becky were already there but Danica was leaving to referee the top women's soccer league in Canada so we only got to see her for a few minutes.

Nick doesn't like cake so he always gets a birthday pie, blueberry, his favourite! Here's he's blowing out the candles on his pie. 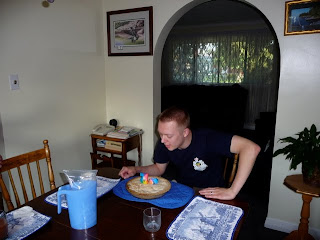 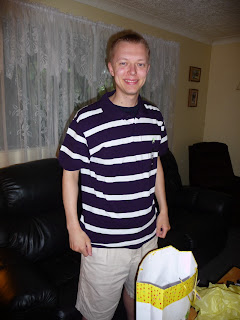 We took our own dinner as Nick always requests baked spaghetti for his birthday, we can't eat the noodles and I also can't have the tomato sauce or cheese so it's just easier this way.

We had a nice time until Gordon checked his ipod and saw that the money had come through for a photo order that he's been waiting for for DAYS! So we had to leave and get home so he could send the photos to the purchaser. It was a BIG order! The largest he's ever had. 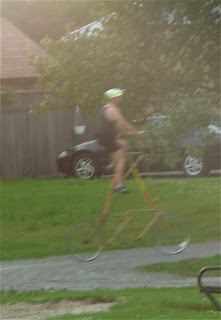 After we got home and the photo order taken care of we were just in time to head over to Kilmarnock for sunset. And a pretty one it was! 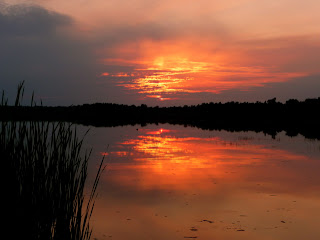 A loon in sunset light 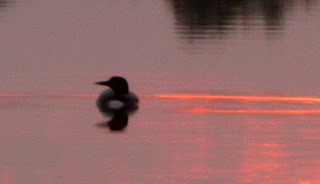 Unlike yesterday, today's humidity was 73% and the temperature was only 21C (70F)! I was out for my walk earlier than normal today as we had plans to go into Ottawa.

Gordon had browned some pork tenderloin last night so I put it in the crockpot with some leftover canned veggies and a package of onion soup mix.

We headed out for Ottawa around 10 a.m. and stopped at Gordon's friend, Leroy's house. Leroy is our 'Mac' person. Gordon was looking for a commercial grade 2 TB hard drive which Leroy had. While he was there I hit a couple of grocery stores looking for a specific product but didn't find it.

After we left Leroy's we stopped at Best Buy and Future Shop as Gordon had his eye on a camera and he wanted to price it before going to his favourite camera store, Henry's. That done, we stopped at Home Depot to price vanity counters then on to Henry's. Gordon dropped me at FabricLand as I wanted to look for a blue and yellow fabric for chair cushions and a tablecloth for the dining room. I didn't find anything I liked but Gordon came back with a camera! 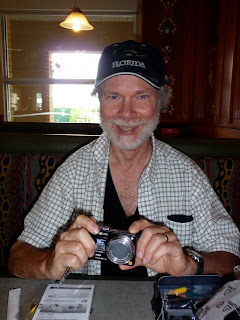 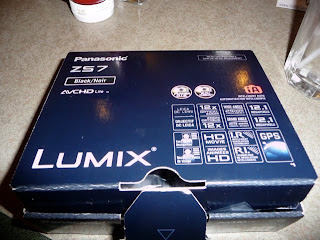 The only two blue/yellow/gold fabrics I could find

I didn't think this one would stand up to chair cushions 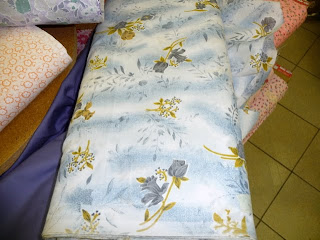 And this one was too loud! 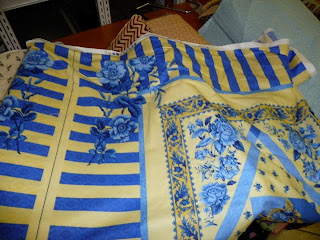 Since it was nearly 1 p.m. and I had a gift card for Swiss Chalet we went there for lunch! Yay, I don't have to cook dinner tonight. The crockpot can go back in the fridge for another day.

Then we stopped at Natural Food Pantry to pick up some gluten free bread and also bread mix. Since Gordon hasn't been eating corn tortillas, he's been eating more bread. All symptoms point to a possibility that he's developed a sensitivity to corn.

On from there to stop and see Max. He was glad to see us and vice versa. He's such a funny dog, he almost purrs when you rub his belly or scratch his ears!

Max was happy to see us! 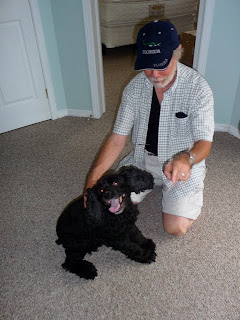 A short stop at Walmart to look at camera bags and we were on our way back to the beautiful little town of Smiths Falls!

We just got home when it started to rain and the temperature dropped quite a bit.

The day started out with 93% humidity but it was still around 19C (66F) so it wasn't too bad for my walk. There was quite a breeze blowing which I was thankful for.

This morning I got some cleaning done, my least favourite thing to do. When I was working when I started making enough money, I always had someone come in every two weeks but now I can't justify it. Lifting that central vac hose around isn't a lot of fun! The one in the RV is shorter and lighter but this is an old system. I expect the new systems have lighter hoses and cleaning wands.

Gordon got some of the half assed work that the previous owner did on the front porch fixed this morning. It looks much better. They have the front porch and steps covered with black indoor/outdoor carpet which has badly worn and the steps are crumbling, something else to do! I'd like to take the carpet off but I'm scared of what's underneath. He also took down the Christmas lights. Half of them weren't working anyway. They were put up with bits of string and shoelaces. Not very attractive!

We went out this afternoon and Gordon found a camera bag for his new camera. While out I got some more photocopying done to send to the Immigration lawyer and some other errands run.

We had just gotten home when we felt something that was like a big truck going by. A few minutes later I found that another lady that I used to work with that lives here in Smiths Falls felt it too. So we decided it had to be an earthquake. Then news started popping up on news sites that it was indeed an earthquake and a pretty strong one to boot. Here's the link.

This climbing plant is growing on our garage. Can anyone identify it? We thought it was clematis at first. 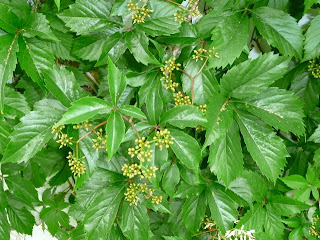