The contractor was here early this morning to have a look at the deck. George, the contractor had left early yesterday as he wasn't feeling well leaving his son and another fellow to finish up so he was here to see what kind of a job they did and also to stain the deck. We also had him change the locks on both doors. When George's son was putting the locks in this morning he told us that his Dad is 80 years old and still able to swing a sledge hammer. 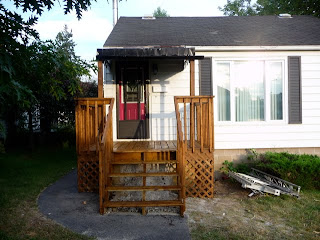 The house with the new deck 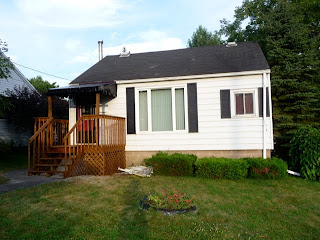 Bath Fitter arrived mid morning and proceeded to get our tub and tub wall installed. It took about six hours but looks wonderful! Now I can't wait to get the new vanity in! 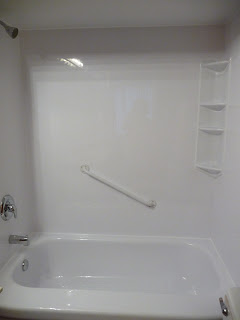 I also got an email from our Immigration lawyer this morning advising that he's working on something right now that will take him to the end of next week and after that he will work solely on our case. Wish us luck!

We went out for sunset again this time at Lower Reach Park which is just down the road from us. 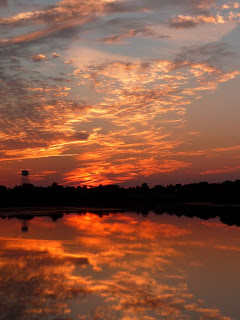 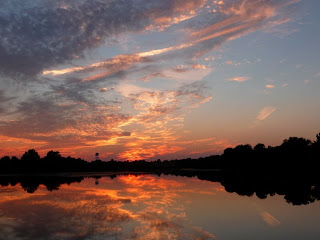 Today was another busy day. George, our contractor came by and started doing some of the little things that I wanted done. He changed the weatherstripping on the back door (it was in very bad shape), took the back door down ready to paint, painted the door jamb and also the side door to the garage. We were going to paint it red but he was already painting it black by the time I got home. It was black originally so that's ok.

I went out to get groceries so he could have done other things and I didn't see him doing them. He has an amazing amount of energy for a man his age.
Posted by A couple of newer paintings 2019 at 11:01 am 2 comments:

I went for my walk this morning. My shoulder has been doing really well today.

We had to go to Ottawa this afternoon as Gordon had a doctor's appointment to go over his tests from his annual medical. All tests were A-OK!

While there we ran a number of errands. I had contacted someone about a used dresser that we were to see on our way back home. We got there and it was way too heavy for us. We're not going to have a replay of that office desk we got last month so we said thanks, but no thanks.

While we were out trying to find the house where the dresser was we saw this very interesting barn. 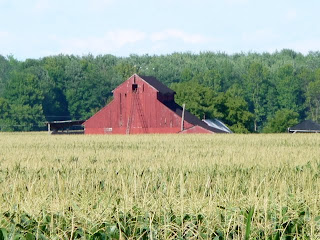 While we were gone the guys worked on the deck. It's starting to look like a real deck! 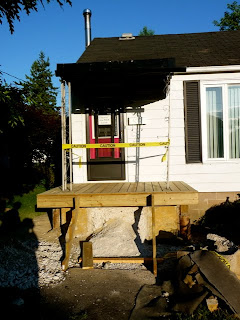 We got back just in time to go out again for sunset. It was pretty at the beginning but clouds rolled in and it fizzled. 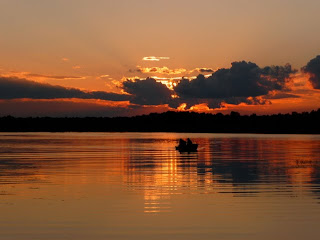 After my morning walk and breakfast I got the urge to do something with the basement. Unfortunately I can't get everything put away until we get more storage but I got things cleaned up and put against the wall so at least the centre of the room is cleared. I put my craft supplies away in one of the storage cupboards that I bought and used vacuum storage bags to shrink down some of the blankets and linens and put into a plastic storage tub. Gordon was putting his tools into an old laundry basket. When the guys are finished with the deck, he'll move them to our storage shed. They're using it right now.

The construction guys arrived around nine and worked all day. It is definitely now a deck! 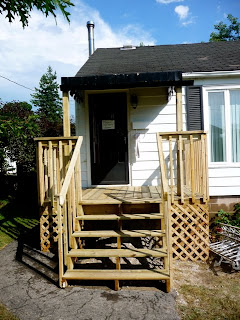 My sister called while we were cleaning the basement. They had planned to come for a visit so they arrived later this afternoon. It just started to rain when they arrived. We had lots of rain and a bit of a thunderstorm. They only stayed an hour or so but they hadn't been here for a while and hadn't seen the office set up.

I had made up a meatloaf for dinner so put it in the oven around 4 p.m. as it's a really big meatloaf! It sure smelled good!

I found this photo today when I was going through stuff in the basement. You may not recognize the two people in the photo but it's us nearly 20 years ago when we were married in Gatlinburg, TN! 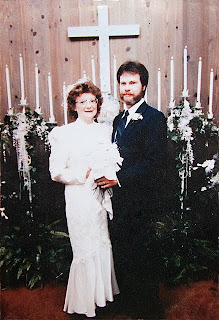 The hot spell broke finally. Almost two weeks of over 32C (90F) weather with high humidity was too much!

There was a lovely breeze this morning with some coolness in it for a change. We decided to go for a Sunday morning drive so we headed over to the locks east of Merrickville - Clowes and Upper and Lower Nicholson's.

Osprey nest along the road 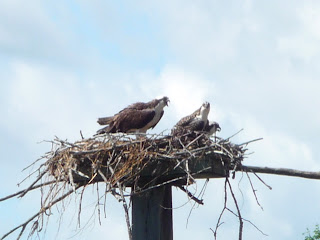 The dam at Clowes Lock 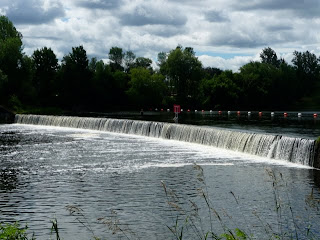 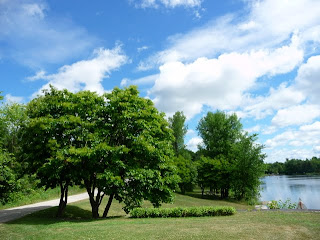 I always liked the colours in these flowers 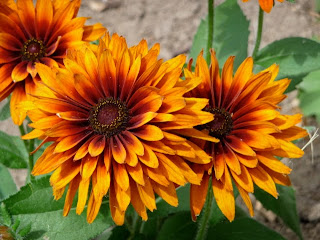 This is a very old house 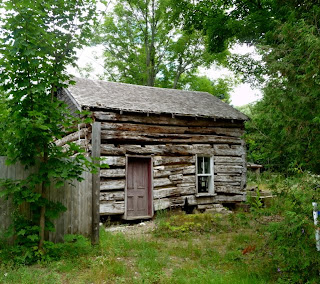 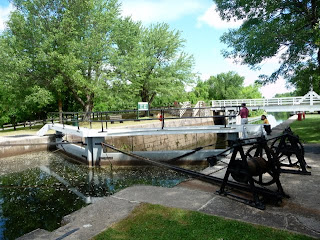 Another osprey nest just across from the lock 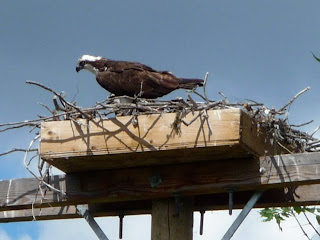 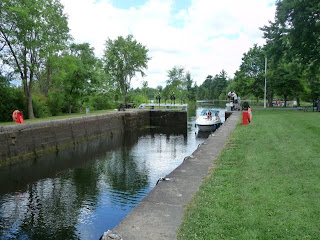 It was a lovely morning for a drive but around noon started to cloud over a bit so we headed home.

We were almost out of gluten free bread so I put another loaf in the breadmaker.

Other than a nap, the remainder of the day was uneventful.

We had quite a bit of rain overnight but by the time I got up the rain had stopped although it was still cloudy. I decided sore shoulder or not, I was walking today. I sure enjoyed being out again and although my shoulder ached I was able to ignore it.

The contractor showed up and started chipping away with the sledge hammer again. I went out and suggested he could probably get farther if he rented a jackhammer so away they went and came back with a small jackhammer. If he hadn't he'd still be here next year this time chipping away. As it is, most of the front steps are removed and it looks like he's going to build over the rest of it.

We went out to run a few errands this afternoon and took a few photos.

This heifer was very protective of her barn 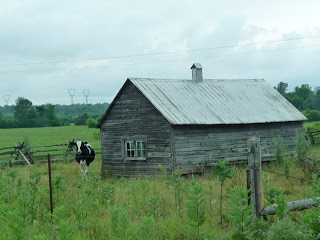 Here she is telling us off 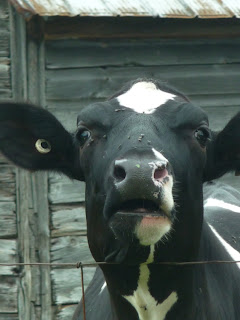 We had planned to go to Perth to get more printouts of Gordon's photos but they were busy today and couldn't do the printing so Gordon will probably go in the morning.

The progress on the front deck 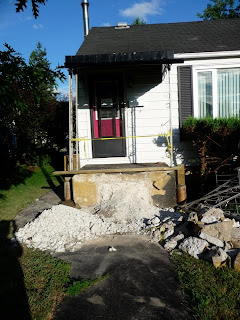 Another sunset drive tonight but it was too clear to make it a nice sunset unfortunately.
Posted by A couple of newer paintings 2019 at 9:00 pm 1 comment: