A Walk Along the Mississippi

I got a fair bit accomplished this morning. I coloured my hair – light ash blonde this time instead of golden and got the place vacuumed. I consider that a ‘fair bit’.

After lunch we decided to go into and see what we could see. From a Vacations magazine for the area I saw that there was a walking trail along the but no directions of how to get to it so my husband found it all on his own. It’s a very nice trail, paved part way and then gravel but wide and level. It also has a boardwalk which reminded us of Six Mile Cypress in except without all the birds although we did see ducks and two large white geese. It was a lovely day for a walk. We then drove to the end of . There’s a campground there called Hayshores. Sounds like he’s just enlarging it but they had a couple of transient spots right on the water. Too expensive though and not as pretty as Tranquil Acres!
Along the Mississippi 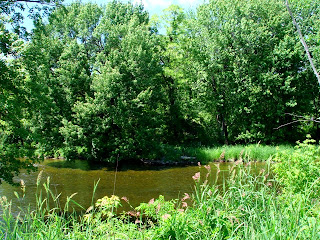 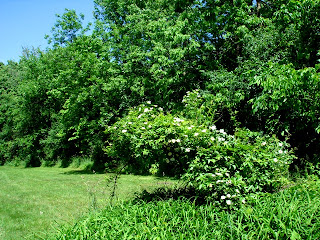 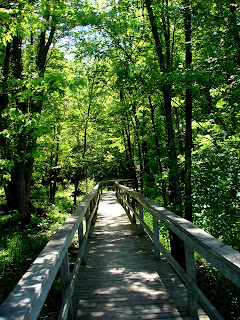 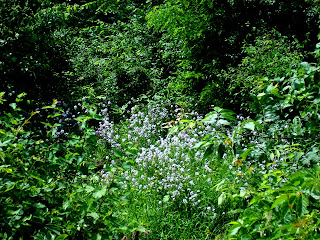 When we came home I sat outside for a while and walked around the campground to see what there was to see. That’s about it for today! 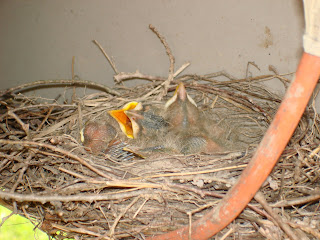 Baby robins nesting under our main slide
Posted by A couple of newer paintings 2019 at 4:52 pm 1 comment:

Nice Day Except for the Rain

At 8:30 this morning it was 21C (70F) with hazy sun so pretty warm for a walk. I did walk but no running today. It was quite windy all day so I sat outside under the awning for about four hours and read. I’ve read two books in the last two days.

The day was pretty uneventful but we were in line for a severe thunderstorm this evening. The rain started shortly after 7:00 p.m. but the severe thunderstorm, tornado and hail warning didn’t materialize. We did have some heavy rain but there were other days this week when it was heavier. The weather passed over quickly dropping the temperature about 10 degrees and taking away the humidity. I really enjoyed my outdoor time today.

More photos of the campground gardens 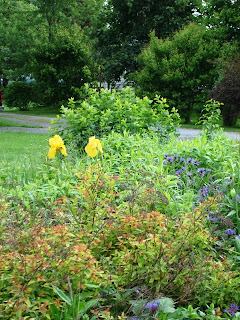 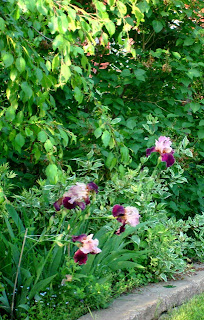 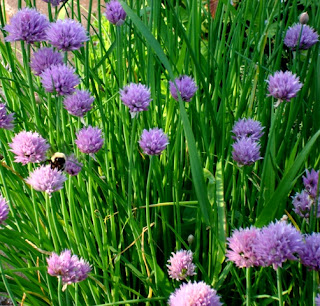 This morning was cloudy with a couple of sunny breaks and 12C (54F) as I was walking. Jean wasn’t home this morning so I went on my own. By 11:00 a.m. it was raining again which foiled my plans to mow the yard around the RV so I resorted to reading.

This afternoon the sun came out and dried the grass and by that time Dave had mowed around the RV on his tractor so I borrowed the hand mower and got closer to the RV and under the steps so it looks tidier. He sure does a good job with the tractor though.

The temperature reached 18C (64F) this afternoon when the sun came out and it was quite pleasant. The good thing about the cold weather the last couple of days is that the mosquitoes go somewhere when it’s cold. They were back this evening though. 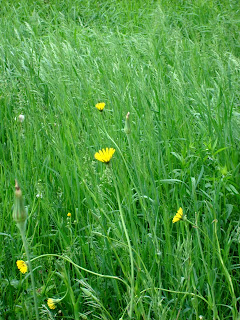 Wildflowers along the road on my morning walk 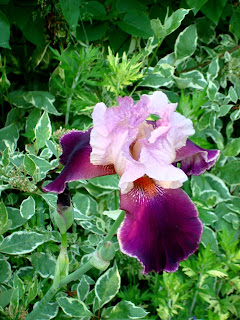 The prettiest iris in the garden
Posted by A couple of newer paintings 2019 at 7:34 pm No comments:

A Day of Errands in Ottawa

It was 7C (44F) this morning but partly sunny. I went by myself this morning as I went earlier since I had to get ready to go into Ottawa as I had a chiropractor appointment early this afternoon and I wanted to make the most of my trip in so I had a long list of things to get done.

First thing I wanted to do was price lenses for my glasses. I got four quotes. There are so many different things to get from thickness of lenses to less distortion and all kinds of coatings. I still want to get one from Lenscrafters. Since I only get (up to) $200 back from my insurance, I want to get the best price that I can. The highest price I got was $946.50, that’s with the thinnest lenses, designer frames and the lenses with the least distortion with all the coatings. The best price was about $550 but I’m not sure what the thickness of the lens is as Sears just give you the best they have.

The lens shopping took up most of the time. I also stopped at Rainbow Foods to pick up some gluten free stuff and got some groceries. I got to my sister’s house just after she got home from work. Her husband filled up my six water jugs so now I have good water for drinking. Danica was there playing her trumpet and I gave her the soccer ball that we had gotten at the Dodge dealer in . I had forgotten about it. Nick also dropped by as he was off today. He was meeting his wife at her job for 5:00 p.m.so I dropped him off there and headed west to . From the time I left Margie’s to the time I arrived at Tranquil Acres it took me an hour in rush hour traffic but that included dropping Nick off.

Although I had a chiropractor’s appointment today by the time I got home my back was not happy with me!

I took a couple of photos at Margie’s but they aren’t that great so I’ll just say – No photos today!

Another cloudy morning and18C (64F) but no rain so Jean and I went for a long walk. It took about an hour. That was the highlight of my day and also the highest temperature we saw today. The forecast is for 4C (39F) overnight tonight but it should be warmed up again in a couple of days. Hopefully this cold snap will get rid of the mosquitoes.

About all I did today was make potato salad. I had cooked a lot of potatoes last night as we hadn’t had potato salad for a while. It’s more the weather for stew than potato salad but oh well, we’ll eat it anyway. That’s all that’s on the menu!

Other than that more reading, napping, internet surfing and watching TV!

Since I didn’t take any photos again today, I’ll leave you with photos of a warmer place with lots better weather – our time in in March. 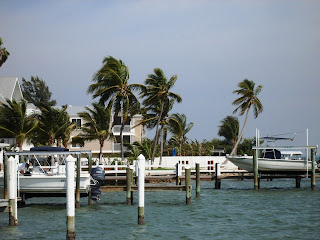 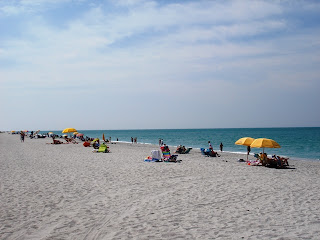 
It was 17C (63F) this morning and raining. I decided I was going for my walk anyway so dressed appropriately and went next door as Jean said she would probably go with me today. We walked for about 45 minutes in the rain. It was actually a nice walk. We saw lots of ducks, geese and a couple of white-tailed deer. Unfortunately I hadn’t taken my camera.

My usual morning routine took me till lunch time, then I settled on the couch with my book and did the usual, read and napped. I think I napped more than read today but it was that kind of day. Our high only reached 18C (65F).

It was a nicer morning today than it’s been lately. The temperature was 14C (57F), partly sunny and not as humid as it’s been. Most of the later morning and afternoon was fairly sunny until around 6:00 p.m. when it looked like we might have a thunderstorm but it didn’t happen nor did it rain at least until the time of this posting. I walked south on the Appleton Side Road today as far as the old train tracks and then walked a ways on the pathway *that used to be the train tracks).

Late this morning I returned my older sister’s phone call. They were at the cottage near Lindsay where it was very nice and they had been in the lake already.

This morning I went to the office and signed us up to stay here until April 6th at which time we will go to Victoria Campground in Cobourg for a week, that too is confirmed and then to Double M Campground (hopefully, not confirmed yet) in Lindsay until September 20th when we will start heading west for our winter trek.

Late this afternoon, my younger sister called and when I go into on Wednesday for my chiropractor’s appointment, I’ll drop by their place after she gets home from work. My nephew and godson, Nick and my niece, Danica will hopefully be there so I’ll get to see them as well. We don’t know yet if Nick’s wife, Becky will be there or not, Margie wasn’t sure if she was off work or not.

I chatted a bit with our neighbors, John and Jean this afternoon. They have been busy over this past week and just got back from . They stopped at Cobourg as I had told them about the nice little campground there and they plan to stop for a few days when they leave here in a couple of weeks.

We watched a couple of movies tonight, one of them a Miss Marple which was quite good. Other than that, we spent a quiet evening. 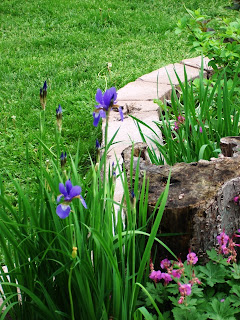 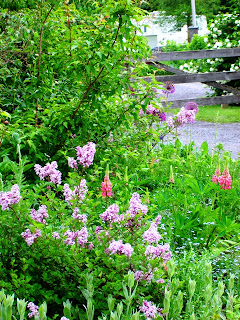