It  looked like it had rained most of the night but when I went for my walk the rain was over and it was just cloudy but warm at 13C (55F). It was lovely for walking and listening to Wayne Rostad!

Last night our fireplace quit. It's only five months old so we pulled it out and Gordon looked at it but he couldn't find the problem so sent the customer service department an email.

By that time the sun had come out.

The good news is that our old mayor got back in office but only by the skin of his teeth. He won by 68 votes! The other good news is four of the six councilors I voted for got elected!

I was getting ready to do some bill paying this morning when I saw that I had been charged $10.19 for data last month on my Verizon bill. When I had looked at the bill last month to pay it, that charge wasn't there and besides, I had the data feature of my phone turned off two years ago! So, I called Verizon. The lady I spoke to said that this data didn't come through the internet (???) and that I had to text them with the word 'stop'. I said I'd never texted before in my life. She suggested I go to the nearest Verizon store to have them help me and I told her that wasn't likely to happen since we're in Canada (I didn't give details) so she removed the charge for the data as well as the $5.00 late fee that's on this month's bill. I always love dealing with Verizon. They're so accommodating and customer oriented. We only have one more month on Verizon and then we're canceling since our contract is up. I'm not looking forward to dealing with cell phone companies up here. In a previous life I've already had run ins with Bell Canada and Fido. We're only looking for emergency service when we get our new cell phones and our cell numbers will only be known to the two of us so we need to get information on what's available. I've been looking for a while but everything is so complicated! We need something cheap but reliable.


We stopped and picked up some things at Natural Food Pantry then on to Leon's to look at DVD recorders. They didn't have what we wanted in stock so we drove back to Kanata and wound up getting what we wanted at Best Buy for less money.

We had lunch at Wendy's. We wish there was a Wendy's here in Smiths Falls but the closest one is in Perth about 12 miles away.

When the appointments were finished we stopped at my sister's to see them and to draw names for Christmas.

On the way home the sun was brutal, not complaining, just sayin.... We stopped for a few photos in the little town of North Gower.

My father used to say "Yellow sky in the morning, sailors take warning". The southern sky was yellow this morning as I went for my walk. Made me wonder what kind of day we had in store.

I got this from Old Wives Tales archives

I borrowed Gordon's photo of this morning's yellow sky. 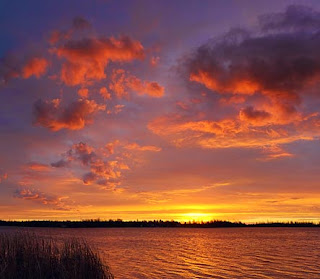 Gordon went to our new dentist here in town this morning and had his teeth cleaned and a check up. He has three more appointments next month. He said the people there are really nice. For him to say that, they must be! He doesn't much like dentists.

When he returned I went out on a grocery/errand run but was back in time to make some bread, do some reading, and take a nap before getting dinner ready.

While I was out, I also checked into more cell phone plans. They're selling phones at pharmacies now and I actually got more information from the lady at Shopper's Drug Mart than any other place we've been.

We had both sun and cloud today but it was windy for most of the day. It was also cooler than it's been the last couple of days.

It was cloudy this morning and while the radio said there was a misty rain, it wasn't raining here so I had my walk.

After breakfast I had to go out and do some photocopying. After only about a month, our fireplace quit working so the repairman is coming this afternoon to fix it under warranty and he needed a copy of the receipt.

While I was out Gordon was busy hooking up our new DVD recorder. It's working but we have to figure out how to set it to record by time.

This afternoon the repairman came and fixed our fireplace. After a month of use, one day it wouldn't turn on. Turned out to be a bad fuse. Now it's working so we hope that's all it was.

It looked like we might have a sunset tonight. Unfortunately the sun has moved a lot in the last few weeks so we'll have to find a new spot for sunset for winter. There was a lot of pretty golden light though. 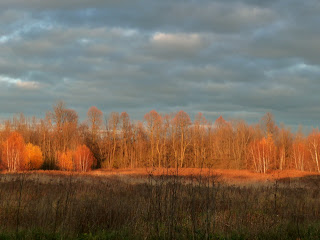 Thursday
It looked wet out when I got up but my trusty radio station said that it wasn't raining so I got dressed for rain anyway and headed out. It started to clear when I was out and I didn't get rained on. I added a couple of new residential streets to my walk this morning.

The power head on my vacuum kept cutting out on me this morning. Gordon looked at it and the wire for the power was broken so I packed it up and took it to the Vacuum Shop. Christine, the owner, is really nice and promised it would be ready today. I continued on to the grocery store, then home for lunch and a nap. Mid afternoon I went back and picked it up, all done. Thank goodness. I'd hate to be without a vacuum with this burgundy carpet!

It was chilly today but we did have some sun. If we were still in the RV we'd still have about a week to go before crossing the border. Way too cold for that this year!


It was way cold this morning. I could even see my breath when I went for my walk. It was cloudy too but later in the morning the sun came out although it remained cold.


I found a recipe at the optometrist's office the other day for Health Bars and decided to try it with a few adaptations to accommodate my food sensitivities. Unfortunately the basis is oatmeal so Gordon can't eat it. Here's the recipe for anyone who would like to try them. 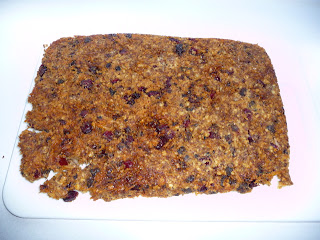 (The photo is before they were cut up into bars)

Note: These bars are awesomely good!
I spent the afternoon snoozing on the couch. Don't know why I'm so tired today.

We had some s*** overnight as evidenced by the roof of our shed (see below). It was cold and cloudy this morning but at least there was no wind so it wasn't bad for walking. 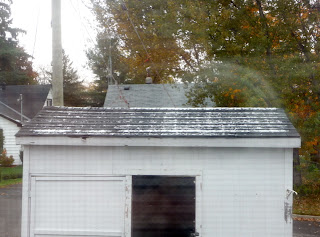 This afternoon I took a couple of boxes of stuff we don't want or need to the Thrift Store. They were happy to get it.

We did get some sun today but it wasn't very warm. It's the last day we'll be seeing sun for the foreseeable future, probably Friday. It will be warmer though!


We actually turned the furnace on today. We've had it on briefly a couple of times but not to leave it on.

Yup! Woke up to rain this morning. I went out for a little while but only about 15 minutes. I was wet!


After breakfast I was trying to organize the broom closet. It looks slightly better. That lead to putting something on top of the cupboards to make it more level so I can put my roosters and stuff up there. Gordon got that done. Then cleaning up and vacuuming.


It rained all day. I read and did computer stuff and made some chicken coated in bread crumbs for dinner.

Talked to my older sister early this afternoon. I used the Google Voice function through gmail to telephone her as I had to call her back to tell her something. It works really well! They say on the link above that it's only available in the U.S. but it works here too! You can also call other phones not just other computers which is handy.


Another gray day but at least it wasn't raining when I went for my walk.


After breakfast I headed out for more groceries. I can't believe what we eat! It was mostly for perishables but I always manage to find something else. I even bought some Hallowe'en candy as I expect we'll have some munchkins on Hallowe'en. 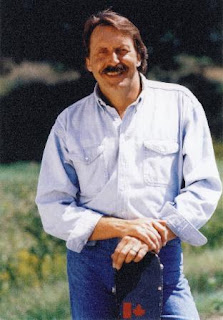 When I got home I found that the two Wayne Rostad CD's that Gordon had ordered for me last week had arrived in the mail. Since I had to go out to the library, I took them with me and went for a little drive to listen to one of them.

Wayne is local so all the songs he writes are about the local area. They a folksy kind of music. He's well known around the area and across Canada as he had a television program for a number of years called 'On the Road Again'. He's been called Mr. Canada and Canada's Storyteller. When we had the house I had the LPs but, of course, sold them when we went on the road and I've missed his music. It's not something that you can pick up on any radio station. He used to perform live in the area as well and I've gone to see him often. He's a great entertainer! Unfortunately he doesn't do that any more, he's more involved in the community, especially the Children's Hospital of Eastern Ontario and the Ottawa Heart Institute Telethons. The photo to the right is Wayne, he's just a good ole boy!


These are the two CD's 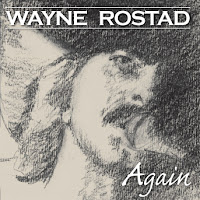 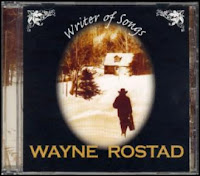 If anyone is interested in hearing him sing and entertain he's on You Tube.

Today is Municipal election day. I mailed my ballot in a couple of weeks ago. I like the idea of not having to go somewhere to vote.
Posted by A couple of newer paintings 2019 at 4:26 pm 4 comments: