I don't usually watch much of the Olympics but Canada has had such a great showing this year that I've watched a bit of it. The athletes are certainly making our country proud!

An athlete, I'm not but I did start out on my walk this morning only to get wet feet again. I need to go in search of waterproof sneakers, I guess. I'll need them for springtime here.

This morning we went out for coffee at Tim Horton's. I managed to drink one without any side effects. I guess the secret is to have Rolaids handy.

When we left we headed west out of Kanata and found ourselves near where Nancy's new house will be (hopefully) so we did a drive by. It's in a beautiful area and looks like a nice house too. It's just across the road from the river. 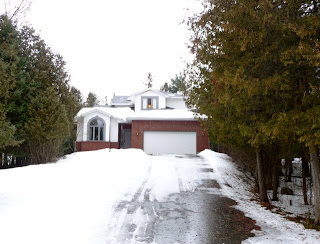 It was raining when we were out so didn't get many photos. It was a wet, sloppy day.
Posted by A couple of newer paintings 2019 at 6:31 pm 4 comments:

We had quite a bit of snow and wind last night. The TV satellite crapped out about 7:45 p.m. so I didn't get to watch Gray's Anatomy or Private Practice. Guess I'll have to look into watching it online.

It was so wet yesterday for walking that I didn't think today would be any better, so I didn't. Instead I went out for groceries and walked around a lot of stores. It's not the same!

Gordon said that when he looked at the weather site this morning we were actually warmer here than Tampa, FL. That's amazing! However, we didn't warm up quite as much as they did.

Nancy is officially under contract for her house so wish her luck that she sells in four weeks. For anyone interested, here are photos that Gordon took of the house.
Posted by A couple of newer paintings 2019 at 6:30 pm 1 comment:

We had quite a bit of wet, misty snow today but it was melting when it hit the road. We did get some accumulation in the yard. I tried to go for a walk but the water was seeping through my sneakers so gave up on that. The temperature was freezing or above all day.

I was watching the antics of the squirrels in the backyard this morning. They're quite entertaining to watch.

Here he is trying to get on the bird feeder and the suet feeder. They're taken through the glass patio door so are a little blurry. 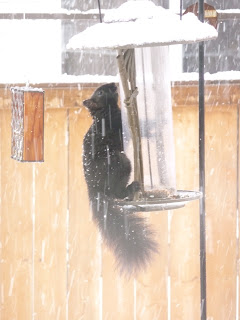 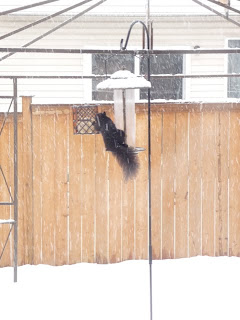 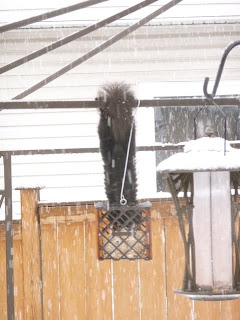 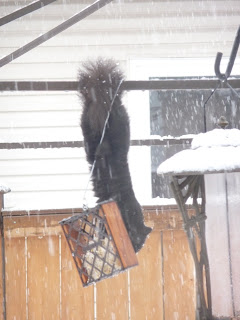 I spent most of the day watching TV. That something I don't normally do during the day when I'm in the RV. I seem to have other things to occupy me.

I made a pan of stew last night so we had that with freshly baked cornbread for dinner. That's something else I'm running low on - cornbread mix. There's only one kind that I've found that doesn't have flour in it and you can't get it everywhere but you definitely can't get it in Ontario!
Posted by A couple of newer paintings 2019 at 6:38 pm 3 comments:

Gordon took the truck in to the dealer again today. This is getting to be a habit! He noticed some oil leaking from the rear and thought it was a seal. It was and they fixed that and changed the rear synthetic oil at the same time. It's been a long time since it was done and needed to be done anyway so that's one less thing to do when we get back in the RV.

Margaret, the housecleaner came before he got back so once Gordon arrived back at the house we headed out. We took the back roads toward Almonte again. It was snowing and a bit on the slippery side but it was pretty! 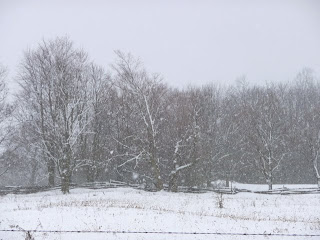 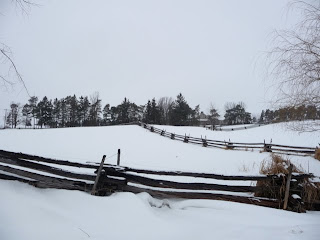 We decided we were hungry so we found a restaurant in Almonte, the Superior Restaurant, that has all day breakfast. It was really good and except for the coffee I had it seems to agree with both of our finicky digestive systems. 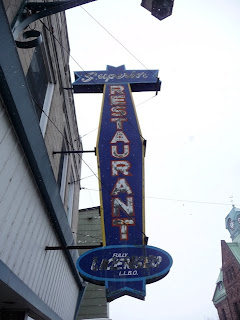 We arrived home early in the afternoon and just hung out for the rest of the day.

Nancy got news back on the house she put the bid in on, they've accepted her bid but instead of giving her the six weeks she requested to sell her house, they've given her four weeks! I imagine it will sell without a problem.

It's still snowing but either melting or turning slushy as it hits the ground as it's about 1C (34F).
Posted by A couple of newer paintings 2019 at 5:19 pm 2 comments:

Today was another uneventful day but we did have some snow. I had my breakfast again before going for my walk and it was snowing quite heavily when I went out but it was warm hovering around freezing.

This afternoon I went to see my doctor as Gordon said I had a mole on my back that looked strange. She looked at it and called it a 'wisdom mole'. They are apparently always benign and are seen in older people.....hmmmm....so she burned it off. She was quite surprised to see me not having heard the 'Day from Hell' story. I spared her the details but told her we'd been here all winter.

Thank goodness Gordon has felt a little better the last couple of days so he was able to go and deal with the truck problem with Capital Dodge. We would rather deal with the Dodge dealer in Smiths Falls but it's just too far away when it's an emergency type problem. Nothing like this has ever happened with the Smiths Falls dealer so we're not very happy with Capital Dodge right now. Let's hope that the fix is done and we won't have any more repercussions.

I didn't walk first thing this morning the way I usually do. Instead I waited for Gordon to come back and took off then. It was nice walking later as most of the people are off the street at that time. When I walk the sidewalks are full of kids walking to school or waiting for buses and adults also waiting for buses, more cars on their way to work etc. I should think about walking later.....

I got an email from Nancy early this afternoon saying it looks like her house will be going on the market so I started to clean up the storage area where most of our boxes from the RV are located. She came home from work early so we got a lot of clean up done, not that it was dirty by any means. So now it's ready except for last minute stuff when there's a showing. Most of you have been through that!
Posted by A couple of newer paintings 2019 at 7:00 pm 1 comment:

The wind was cold this morning but it didn't stop me! Out I went. Actually it's been much colder when I've gone out so today wasn't that bad.

I got a call this morning from my cousin who sold his house this summer and he and his wife left for Arizona with their motorhome. They also own a house in Sun City, AZ. He wanted to hear the details on my Immigration problem as they had had a problem crossing the border as well but they did get through after about an hour of talking to an Immigration Supervisor. We had a nice chat.

I read most of the day. I'm now reading a Harlen Coben book called 'Back Spin'. I really like his books.

The tow truck came this morning and took the truck to the Dodge dealer that replaced the water pump. Nancy drove Gordon over so he could drop off the keys, then brought him home again. She has offered to drop him off at the dealer in the morning as well but it will be early!

This afternoon Gordon wanted to go for a walk and see some of the paths I have discovered so we had a nice 45 minute walk. I really should do this twice a day.

The path between the houses. This is also called Dog Bone Park. 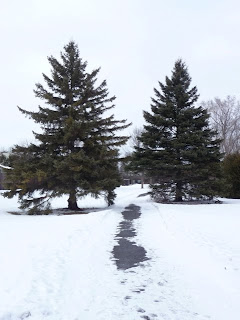 Bridge over the Upper Carp River 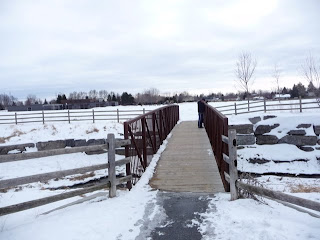 The Upper Carp River flows through the residential areas of Kanata. It's not a very big river!