After I got the Christmas cards done, I decided I wanted to send our 20th Anniversary photo to my Aunt so I went out to get a copy printed. The plows were out in force and they were even plowing some sidewalks.

It looks like they clean the sidewalks with a wing of the snowplow other than the downtown areas where cars are parked. I saw a couple of small sidewalk plows downtown this morning. A lot of the sidewalks near where we live were cleaned this afternoon so I went out for a walk. Sure was nice!

After dinner we took another drive to see the Christmas lights. I haven't changed my mind about the prettiest lights in town.

Other than making a loaf of bread and wrapping a couple of Christmas presents that about made up the day!

You could tell it was cold this morning by the snow crunching under my feet as I headed out for my walk. I decided it was probably not going to get a whole lot warmer so I'd better get over it! So at -13C (9F) with a -18C (-0.4F) windchill, I dressed for it and surprisingly wasn't cold. The sun was shining although sun tends to make it colder at this time of year.

I had ordered some file pockets at a downtown stationery store so I had to pick that up and I had several other errands to run around town. The Downtown Business Association has generously given us free parking for the month of December, not that parking is expensive. For 25 cents you get an hour and five minutes. You get two hours of parking in a spot then if you don't move you get a ticket but two hours is enough for the size of downtown.

It was very cold this morning -13C (9F) with -21(-6F) wind chill. I decided it would be a good day not to walk. However, after vacuuming the house (Gordon did the stairs and landing), I went out in the car to pick up some things I forgot yesterday.

It warmed up today and was actually above freezing most of the day. It was a great morning to walk to the post office to mail my sister's birthday card. I thought they had pickup on the weekend so it won't go out till Monday. I think it will be late!

After breakfast we went for a country drive. Gordon had located Bellamy Lake near Toledo (Ontario) so we drove out to see it. There's another lake a short distance away called Eloida Lake so we went to see it too. Both lakes are visible but Bellamy is a great place for sunrise or sunset so we'll check that out when spring comes. I expect Gordon will go before that. For some reason I didn't take a photo of Lake Eloida.

This afternoon I went out and picked up some prescriptions and some looking around then came back. My sister had called. She's having a lot of the same problems that I've had over the past year but she's in denial that it's related to food! It's not easy to not be able to eat a lot of things and when you still feel terrible and can't figure out what it is you're eating that you shouldn't you just want to jump in a hole and pull the hole in after you but you have to just keep plugging along.
Posted by A couple of newer paintings 2019 at 5:22 pm 1 comment:

Today I did some running around town, picked up a Sears order, picked up my Avon order etc. Not an exciting day but a tiring one so when I got home I lay down to read and took a nap! This was the first order from my Avon lady. She's really a nice young woman with a couple of young kids and an amazing black Afghan hound. He was so friendly and vocal and HUGE! I love other people's dogs. LOL

After dinner we went out to look at the Christmas lights. There is a lovely one here in town. In fact, I'm going to vote for it! The town has a Light Up Smiths Falls Contest where you can vote for your favourite decorated house or business. 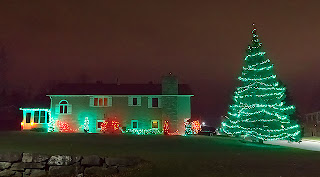 Here's another one that was pretty between Smiths Falls and Merrickville.

Sunday
At -8C (18C) with a -13C (9F) windchill it was pretty cold this morning but at least the sun was shining even though there were some snow flurries. We have barely enough snow to cover the grass but I hear we are to have more today and tomorrow. We're still warmer than a lot of places that I'm hearing about from RVers though and I hear Buffalo, NY had a blizzard last week that caused a 20 car pileup on the freeway, lake effect snow!
I got a lot of cleaning done!
By the end of the day we had quite a bit of snow, looks Christmasy! 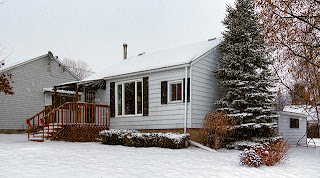 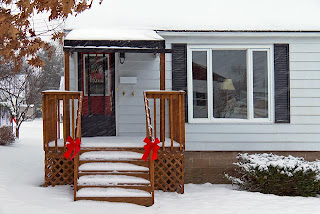 Monday
Today was a typical Monday. I went out for my walk but it was a short one as the sidewalks hadn't been plowed. I'm thinking that's not going to happen a lot here.
After breakfast and a shower I headed out for Monday shopping. That accomplished I settled in with my book again.
Tuesday
No walk for me today, blowing and drifting snow, sidewalks not plowed. Bummer!
So, I got my Christmas cards ready. I send very few of them! I sent the ones to the U.K. yesterday.
Posted by A couple of newer paintings 2019 at 10:37 am 3 comments: