Today was another hot, sunny day. I did go for my walk this morning as my shoulder is improving greatly. I can't say enough good things about A535! I did notice when I was out this morning that a lot of the green trees now have red leaves. How does that happen when it's been so hot?

I went out for groceries this morning. Thank goodness I took the cooler with me!

When I got back I did some couch time with my book. I got regular print books instead of large print at the library this time for the first time in about 2 years.

It was cloudy and humid when I took off for my walk this morning. We had sun, cloud and rain today, a real variety.

We made one trip to Home Hardware this morning but other than that stayed home all day and read or was on the computer. I have a huge amount of stuff piling up to do, one of which is posting all my receipts to my spreadsheet which I have only done once since we moved here. That is going to be a very tedious job.

It was sunny and humid this morning as I set out for my walk.

The plan for today was to head in to Ottawa, go to Ikea to get some bookshelves to surround our TV then go to my sister's for birthday dinner for Gordon and I. I had a sleep test scheduled at the Queensway Carleton Hospital so Gordon was dropping me off and going back to Margie's to spend the night as I was to be released between 5 and 6 a.m. and it's too far to drive for that sort of timeline. Originally I was going to drive myself but when Margie suggested the birthday dinner, other arrangements were made.

We had a nice dinner at Margie's. Danica had to leave to referee an old timer's soccer match but Nick and Becky and 'Bean' were there along with friends of theirs and their baby.

I arrived at the Queensway Carleton Hospital early for my sleep test, sat and read my book for a bit, then filled out the required forms when the night staff showed up and was given my room and wired up for the night. It's not easy to sleep with all those wires hanging off you!

I think I slept about 3 1/2 hours so hopefully they were able to get enough information. I was roused at 5:30 a.m., filled out more forms, called Gordon to come and pick me up and we headed home.

It was much cooler this morning after the rain we had last night and the wind today was almost chilly. This morning was also the first sunrise I have seen in quite some time but there was quite a bit of cloud so it wasn't spectacular. We did stop along the way and took some ground fog photos.
Ground fog 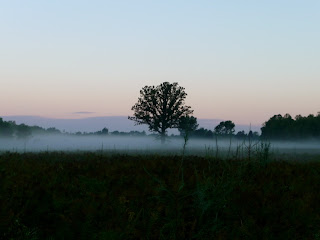 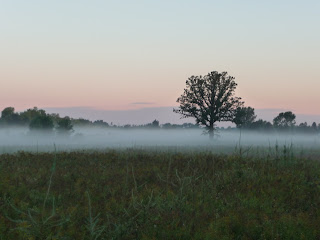 And the sun casts a golden glow on the trees 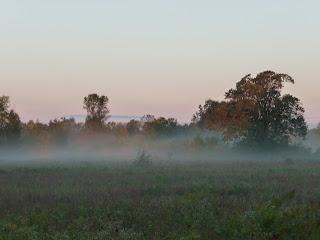 The sun coming up behind the trees 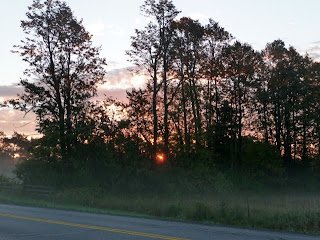 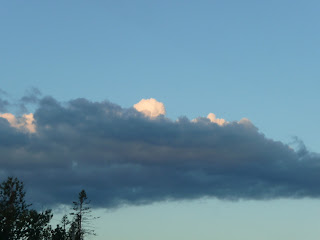 After unpacking the car, putting away presents and having breakfast we headed out to see if there were any garage sales. I managed to find a corner shelf that I've been wanting. There weren't too many happening today. It was supposed to rain all day so I guess people decided not to bother. When we returned home we both lay down for a while but I couldn't sleep so after lunch I suggested we start getting the truck cleaned up in preparation to sell.

Somewhere in there I had to have a shower to get all the goop out of my hair from the electrodes. YUCK!

We cleaned all the stuff out of it and Gordon moved that to the basement while I did the best vacuuming job I could with the little shop vac we have. It looks better but there's more to do!

Gordon also hung my shelf and I have put some stuff on it already!

The shelf is a good match for the woodwork 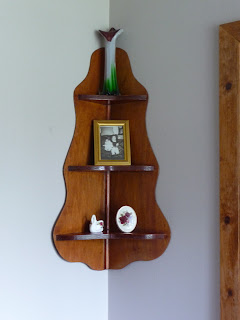 After that it was time to relax and I was able to have a nap while listening to the wind chimes that my niece gave me for my birthday tinkling from the front porch. A very pleasant sound......
Posted by A couple of newer paintings 2019 at 6:58 pm 1 comment: