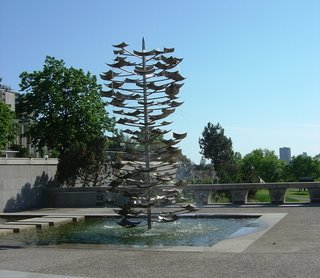 Fountain at The Garden of the Provinces and Territories 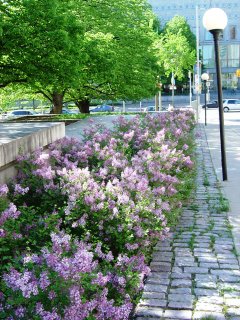 Lilacs along Bay Street
This morning was busy. I coloured my hair, cleaned and vacuumed, got showered as I was hot and sweaty and then sat outside and read for a while. The sun had come out around 10:00 a.m. after starting out as a cloudy day.

Yesterday afternoon I cleaned out under the bed and found a coat that I didn’t know I had kept. I’m really happy about it as I really liked that coat. I had bought another one at the Thrift store but it wasn’t all that warm and it was bright red so I’m glad I found my own. I was sure I’d given it away. You’d think with the small amount of storage space we have I’d know everything that we have but obviously not! Unfortunately it’s almost out of time for wearing this season but I’ll be happy to have it in the Fall.

This afternoon, I sat outside and read again. Bib sat with me for a while.

Late in the afternoon, Gordon decided he wanted to go downtown to take abstract photos so off we went. We parked on Bay Street near Wellington and took some photos in the Garden of the Provinces and Territories then walked east on Wellington, south on Bank and back to the truck through the Sparks Street Mall.

We decided since we were downtown to head south on Bank Street and have dinner at our favourite Mexican Restaurant, Feleena’s in the Glebe. Bad move – today was the Glebe Garage Sale. They were really busy and had two parties besides but we only waited 10 minutes or so for a table. We didn’t get to sit outside but that’s okay. We’ll be back!

Then back home for our usual TV and internet. Bib was glad to see us. He couldn’t come with us as it was too hot in the truck to leave him and he’s scared walking on the streets downtown. Too much noise!
Posted by A couple of newer paintings 2019 at 7:38 pm No comments: 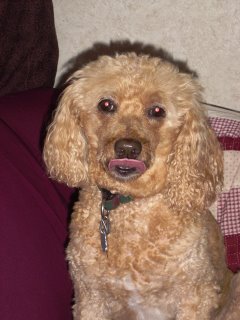 This morning I decided I had better get the refrigerator defrosted before it gets really hot. It doesn’t take that long to do, it’s just to get at it. Thank goodness that’s done.

At about 11:00 a.m. I went out to pick up a few groceries and some wine before the weekend rush. Also got some photocopying done to send for my extended health care. It had been mostly cloudy but when I was out there were a few sprinkles of rain.

No heavy rain up until posting time just sprinkles and cloudy.

Photo today is of Bib. I just caught him as he was licking his chops.
Posted by A couple of newer paintings 2019 at 7:32 pm 1 comment: 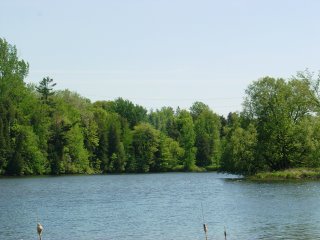 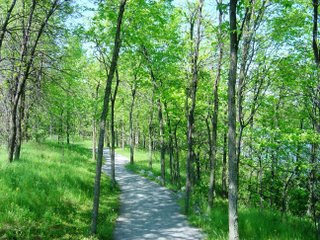 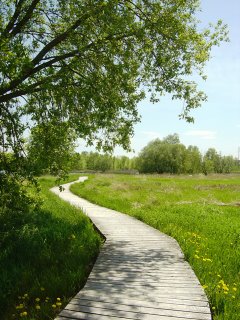 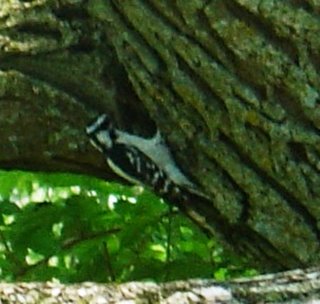 Downy Woodpecker (cropped photo)
I stayed up till midnight last night to watch the season finale of Lost so I was still tired this morning. After walks and breakfast, I went outside to read but it was too hot in the sun and very little shade on our site so I came in and fell asleep.

When I woke up, Gordon wanted to go south on Prince of Wales (Hwy 16) to the Chapman Mills Conservation Area where he had gone yesterday so Bib and I went with him. Photos today were taken there. It's located on the west bank of the Rideau River just south of Black Rapids and off Winding Way. We walked for about an hour and then came home. It's a nice walking area. There is a pathway but most of it is boardwalk.

I sat outside when we came back for quite a while and read my book.

Our neighbours were at a rally at Stratford, Ontario this weekend and on their way back stopped at Lindsay and got their satellite dish from 3i Communications so we made a quick $100 for the referral!

It’s TV and internet tonight!
Posted by A couple of newer paintings 2019 at 8:02 pm No comments:

Wow! What a change in the weather from the last week. Today was sunny and warm and reached 25C (78F)!

We left the RV at about 6:50 a.m. to go to the lab for Gordon’s bloodwork and then went to Zellers at Bayshore for breakfast. Gordon was going to visit his friend, Leroy so I stayed and looked around at Bayshore and he picked me up around noon.

Neither of us slept very well last night so this afternoon, I sat outside in my lawnchair with Bib for a while and read, then came in and read some more. I thought I would take a nap but that didn’t happen. Gordon went out in search of photos but I didn’t feel like going out again. Consequently, I have no photos for today.
Posted by A couple of newer paintings 2019 at 7:05 pm No comments: 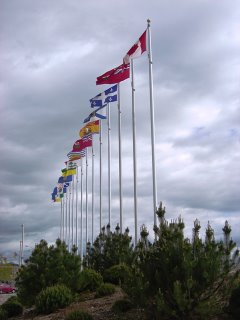 Flags in front of the War Museum 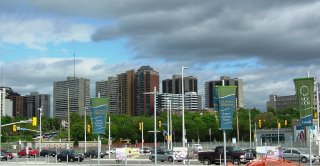 Downtown Ottawa from the War Museum 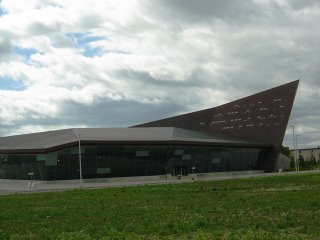 Canadian War Museum
Today was fairly busy. I got ready early and headed out and got groceries and some photocopying that needed to be done before I went for my mammogram. OUCH!

When I came out of the grocery store, a familiar car drove by so I ran over and just caught our lawyer, Liz getting out of the car to go into her office. Liz bought our Saturn nearly two years ago when we started our odyssey. It was great to see her again!

I got home around 12:30 p.m. and had lunch in time for Gordon to go for his appointment with the ENT doctor. He has something on the inside of his lip that hasn’t gone away so our GP wasn’t sure what it was and made the appointment for him to see the ENT. He has another appointment in June to go to the Ottawa General to have it cut out. It’s nothing to worry about, no malignancies or anything, just annoying.

Just TV and internet tonight!
Posted by A couple of newer paintings 2019 at 7:30 pm No comments:

Last Day of a Long Weekend

I woke up to bright sunshine this morning. Haven’t seen that in a while.

Got the laundry done this morning. Early this afternoon my sister, Margie called. She saw a dress for Nick and Becky’s wedding and wanted me to go and look at it with her. She wound up buying it.

It’s very cold today for the time of year but at least it didn’t rain much.

I woke up to, guess what – rain! Can you tell I’m getting very sick of it? After taking Bib out, I had thought about doing my walk in the rain but then it started to come down more heavily and I changed my mind. So back inside for breakfast and by the time showers and such were overwith and some reading it was nearly noon.

The sun came out for a bit so I did manage to get my walk done but since I hadn’t gone yesterday because of the rain, I’m still a day behind there.

I decided to go out and pick up a few groceries since tomorrow is a holiday. Our holiday weekend here in Ontario is Victoria Day in honour of Queen Victoria. Too bad it’s such nasty weather! I seem to recall last year was much the same on this weekend.

Bib was getting bored being inside so he and I got in the truck and headed out to do some shopping. I went to Merivale Mall with the intention of getting most things at Farm Boy. I met my brother-in-law, John in the mall and he said there was quit a bit of mail waiting for me at the house and that Danica was there so I could drop by. When I got to Farm Boy, I met he and my sister and we chatted for a short time. Next to the Zellers mall to pick up some things and then on to my sister’s house to pick up the mail.

Danica was there and I got some info on how she enjoyed musicfest. One of my friends, Laura asked me if she played jazz trumpet and she does but thinks she’s more suited to concert band. She said she had a great time and loved it but there was evidence of her getting homework done. With going to New York for a few days and being at musicfest all week, she now has to get back to the grind. High school will soon be over and she graduates on June 28th, then on to the University of Ottawa in September!

I didn’t get to see Nick, he was sleeping. He’s been working and it’s a bit of a grind for him having to get all the way to the southeast end of the city at all sorts of hours.

Can you tell I’ve been reading Rosamund Pilcher again? I seem to be adopting some of the British way of writing.

After that, I stopped at Your Independent as I had forgotten to get bananas and I needed to pick up something else I hadn’t found, that done, I headed home.

Again, no photos. Just isn’t the weather for it!
Posted by A couple of newer paintings 2019 at 5:57 pm No comments: