Saturday November 20, 2010-Along the Back Roads

It was cold and sunny this morning as I headed out for a short walk. I got up late so by the time I got walk, breakfast and things cleaned up it was time to go to the library. They were having a one on one course for people who are interested in downloading audio books. They also have some e-books available but over the next few months they will be developing that part further. The audiobooks downloaded are only good for 7 days before expiring. If you try to open the audio book after the 7 days it tells you that your license has expired. You then have to delete it, go back in and download it again.
When I got home since it was such a nice day we decided to go for a drive so through the countryside and the back roads southwest of Smiths Falls we went. We found some very pretty spots, lots of wetlands and barns. 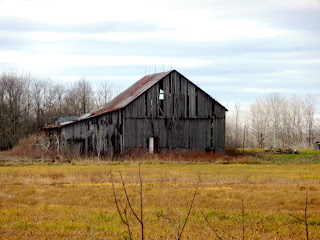 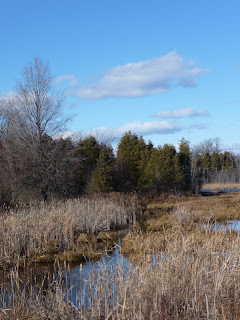 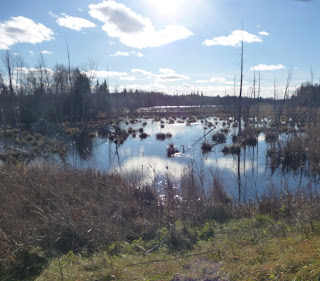 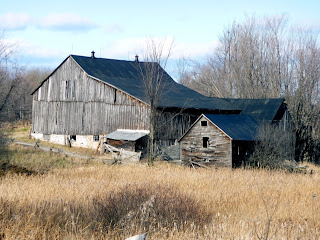 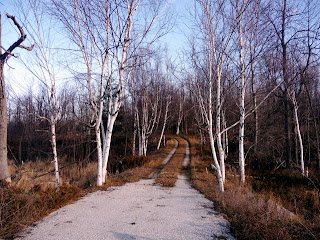 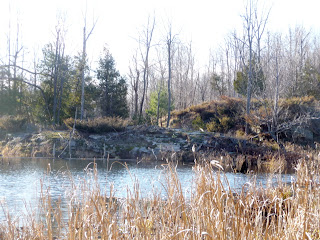 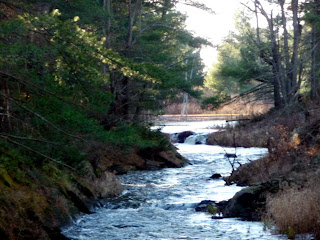 For further details on our twin grandchildren go to Gordon's blog here.
Posted by A couple of newer paintings 2019 at 7:28 pm 2 comments:

Tuesday
It was very foggy when I finally dragged myself out of bed this morning. I didn't walk AGAIN! I really hate that but I knew I needed to go for groceries today so didn't want to aggravate my heel anymore than I had to.

Gordon had a dentist appointment this morning. He's getting everything done before my coverage ends at the end of the year.

While he was gone I baked a loaf of bread and got the vacuuming done. More heel aggravation!

After lunch, I went out for groceries but stuck to two stores to stay off my heel. When I returned, I lay down to read and woke up late for getting dinner. It was only about 5 minutes late.

After a night of rain we had a very nice, warm (for this time of year) day only to give it up to rain again as darkness fell.

Last night, I listened to Howard & Linda Payne's live radio broadcast interview on the RV lifestyle with a talk show host in Connecticut. They did a good job. I've been following their blog since they started RVing the year after we started and we got to meet them briefly when we were at Mustang Island State Park, I think in 2005.

I woke up to rain this morning so had a good excuse to stay off my heel. I had another night last night of not feeling well. Don't know what's up with that. It wasn't as bad as Saturday night but definitely not the norm for me. We'll have to see if it continues. It's probably reflux related.

I did nothing all day again, read, computer. The temperature dropped throughout the day and it continued to rain.

I decided to get off my hiney and go for a short walk. It wasn't rainy and wasn't particularly cold (by our standards for the time of year) so I went out for 15 minutes and even did some running being careful not to land all of my weight on my heel. It didn't seem any worse when I returned but iced it right away anyway.

Our twin grandchildren were born today but that was reported separately as it was a very special event! Here are some new photos that Tracy's (the mommy) sisters have posted on Facebook. It's hard to tell them apart right now without their hats on! 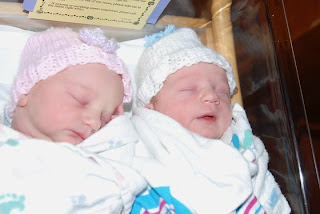 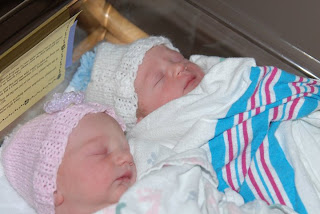 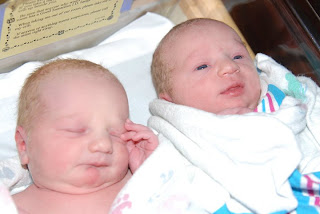 We actually had a wind chill this morning. The temperature was -2C (28F) but the wind chill was -8C (18F). It was sunny though so I had a short walk.

I thought I had lost my new phone this morning. Gordon called me and it was no where in the house so before panic completely took over, I checked the car. Somehow it must have fallen out of my purse and it was on the driver's seat ringing away. Gordon must have sat on it this morning and didn't realize it. No damage! I'll have to rethink where I put it in my purse, I guess. It's not that much different in size from the Verizon one but I guess it's enough that the side pockets aren't safe.

This afternoon I had my first appointment with our new dentist here in Smiths Falls. I really liked the hygenist and the dentist that I spoke to was really nice as well. He doesn't think I need the gum grafting which really endeared me to him.

After that I went to the Real Deal. It's a recycling place, like a thrift shop but doesn't have clothing. I wanted to register for a repurposing class to take place next Friday. That should be fun. The general description I was given was pick something in the store and figure out something else to do with it other than what it was intended for using crafting methods. Okay, we'll see how that works.

I picked up some stuff to make a wreath then headed downtown to look around. It was cold but a nice sunny day. I managed to find three sweaters at the Thrift Store downtown but after walking around my heel was really sore!

This morning we got ready and headed in to Ottawa. I had an appointment for a visual field test at the optometrist's office due to signs of glaucoma that have come up over the past year or so.

We arrived early and started looking at cell phones. I wanted to go to one place that sold for everyone so they could give us the best idea of what company to go with and what plan/pay as you go. We ran out of time so headed for my appointment.

My visual field test was inconclusive so I am to go back again in 6 months. While there and since my Nortel extended benefits are finished as of the end of this year, I decided to get glasses for using the computer. I picked out my frames and the glasses should be ready in about a week.

After that we went to my sister's. She had taken today off and we had John's birthday gift to drop off. We got him a portable tool chest. Unfortunately I didn't get a photo.

It was at their place that I tried my Verizon cell phone and realized that service had been cut off six days early so we headed over to Carlingwood Mall to Wireless Wave where we decided to go with Bell Mobility (even though I hate Bell). Both my sister and her husband were adamant that Bell was the way to go. We checked out various plans but decided to buy the phones outright and go with a pay as you go. So, if anyone has our Verizon cell phone numbers they are no longer any good and we're only using our new ones for emergency use.

With that problem taken care of we had only a couple more stops to make and we were home again!

I didn't see anything on our trip worth photographing today.
Posted by A couple of newer paintings 2019 at 6:51 pm 1 comment:

The last couple of days have been sunny and beautiful (once the sun warms up) and this morning was no exception except it was only -3C (26F) when I went out for my walk this morning. Gordon took some photos at sunrise this morning of ice forming on the water. I'm surprised since it warms up to 10C (50F) during the day.

Today was another beautiful day and we almost made it to 20C (68F)! People were walking around with shorts on. Of course up here they wear shorts when there's snow on the ground but that's only a select few. I had a great walk!

I've been having trouble with right heel pain, probably plantar fasciitis. I've been doing the exercises recommended but it's not helping much. It will be okay for a while, then I'll stand up to walk and it's hurting again. I have inserts in my shoes. I just might have to break down and seek some medical help.

Anyway it was too beautiful to stay home so this morning we went out to do more research on cell phones. I think we've decided to go with Rogers. They seem to have the best deal for what we want. Then to Zellers to buy a mirror for the bedroom. I like a full length mirror and we have been doing without one.

After that we took off for a drive to Kemptville. It's only a short drive away 37 km (23 mi) but I hadn't been there for years. It seems to be a pretty happening place. Lots of stores have been built since I was last there and the downtown area seems to be thriving. Most people who live there work in Ottawa.

I saw where they're building the new Walmart and we drove all around the town, stopped and had lunch by the Kemptville Creek but no photos taken. It's a pretty town in a way but not a photographic spot.

I was sick all night last night. Between my heel pain and my sick stomach, it wasn't a good night. This morning I gave up my walk and just stayed in bed. My stomach felt a bit better when I finally got up late this morning.

Another day of hanging around the house napping and reading. I did manage to get my hair coloured. I wanted to get it done today so the timing works out do get it done again just before Christmas.  My stomach has been iffy for the most part this afternoon. I had some rice crackers and a mug of beef broth.
Posted by A couple of newer paintings 2019 at 4:55 pm 1 comment: