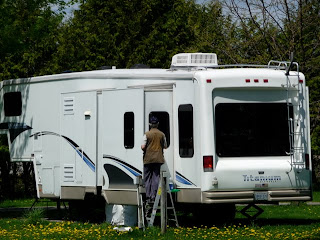 On Tuesday we had a 45 minute conference call with my immigration lawyer. He went over a couple of different ways that he plans to approach the courts. In the meantime, I have to find as much proof as I can that I never lived in the US and never used my green card to cross the border. Each of us also have to write a statement summarizing our lives since 1992, not an easy task especially with everything else we have to do for the move but I have mine just about done. I also called State Farm and they are sending me a letter stating that I worked for them full time from May 1971 to January 1997 which should help.

On Wednesday we headed to Carleton Place and washed the RV windows, inside and out since I had posted it for sale on Craigslist, Kijiji and usedOttawa.com; we then headed to our storage locker again to put some more stuff in it. Nothing else will fit unless we empty it and start over. We did another drive by the house, dropped in on our insurance agent to finalize the insurance on the house then stopped by the Dodge dealer to look at the Dodge Caliber and the Nissan dealer to look at the Versa.

The cleaning lady now comes on Thursday so although it was cloudy with a threat of rain we headed back to Commissioner's Park to see the tulips again. By the time we got there the sun was shining however the wind had picked up. We got lots of pretty tulip photos as evidenced below. 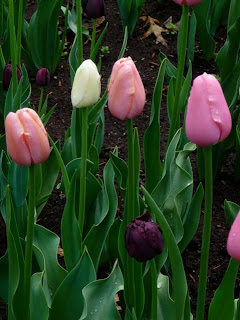 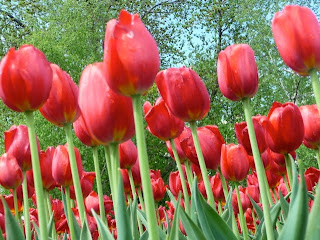 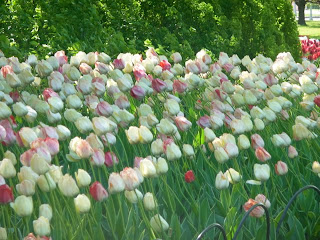 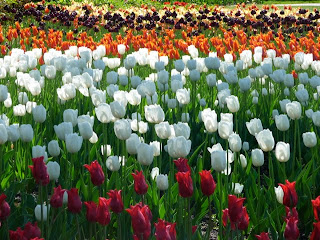 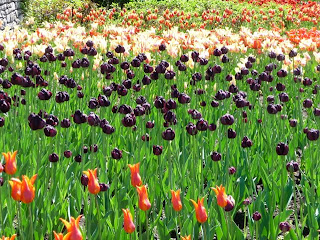 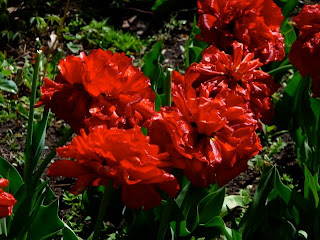 Then we stopped at the birding area across from Billings Bridge Shopping Mall. There were a few wood ducks there today. Here's a photo of a male and female swimming in the Rideau River. 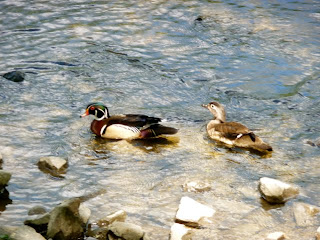 We then stopped at the Mall as I've wanted to go all winter. I hadn't been there in ages. While there we had breakfast for lunch at the Zellers diner as we had more things to do and didn't want to have to go home for lunch.

From there we stopped at Metro Auto Body and got an estimate for the driver's side damage on the truck. This damage has been there since it was three month's old but we thought if it was repaired we might get a better price. We did indeed get a good price from Metro and he will do a repair on the scratches on the right side for free.

We headed back toward home and stopped at Kanata Collision for another estimate - way, way out of line.

We'll look into getting the work done after we get moved. We just have too much going on right now.

Of our three estimates there is as much as $2000 difference, which is absolutely ridiculous!

In 1975 I took the appraisal course in Blairsville, Pennyslvania. Nothing was done on computer then, all written by hand. I would have no clue how to do it now. But I do know when I'm getting ripped off!
Posted by A couple of newer paintings 2019 at 7:01 pm 3 comments:

Let's see, what's happened since my last blog. Unless I write it down, I can't remember.

I know we bought a few things - a fertilizer spreader, a floor lamp and a couple of picture frames through either the want ads or a garage sale just up the street this past weekend.

I had my routine mammogram on Saturday and met a girl that I used to work with at Nortel there. I hadn't seen her in about eight years.

I haven't been walking every day lately. Things have gotten quite busy so that's one thing that's fallen by the wayside. I go when I can but I seem to be losing weight anyway so I guess this food sensitivity diet is doing something.

Yesterday I got most of the interior of the RV cleaned up so it can be shown. There are still things to do, like empty all the cupboards but that can't be done till we move to the house. I also want to wash windows and clean the oven, hopefully Wednesday or Thursday. We have told the campground owners that they can show it but I haven't listed it online yet.

My fix for the kitchen floor didn't work so we put down rubber matting. I just can't get into sanding the whole floor right now.

After cleaning up the RV we drove to the storage locker and put some things in it from the RV but it's getting full! We did a drive by the house and while in Smiths Falls saw the that RV park is open.

Today I had my spring appointment with the hygenist at my periodontist's office to get my teeth deep cleaned. The periodontist came in to check my teeth and told me I need another gum transplant. I had one in 2003. Not fun! So I'll put that off as long as I can but it will have to be done before the end of the year when my insurance runs out.

I'm sure other things have happened but I sure can't remember anything of significance so that's all for now!
Posted by A couple of newer paintings 2019 at 6:38 pm 5 comments: