The rain yesterday and last night kept knocking out the internet satellite and thus knocking me out of the rv-dreams chatroom. It was really very heavy at times. It even knocked out the TV satellite which is pretty rare.

This morning when I got up the sun was shining but we still had some cloudy periods. Being Saturday I got to walk on the other side of Prince of Wales in one of the residential areas.

We didn't do much this morning but I did sit outside reading my latest book 'Fire Sale' by Sarah Paretsky. I only have one left to read after this one of the ones my sister, Betty, brought down with her when she came for Canada Day. I'm sure she'll have a pile more of them when we get to Lindsay.

We decided this afternoon to go and walk on a trail since it looks like the next three days are going to be rainy. When Gordon went outside he found that our neighbour, John was out so he went over to find out how he did on his Class A license yesterday. He said it was a piece of cake so he is now licensed properly to tow his Mobile Suites.

We sat outside with them for about 1/2 hour before taking off. We settled on Pinhey Forest which is behind the Nepean Sportsplex. We walked there for about an hour but only saw one squirrel and a blue jay. It's very shady in the pines so we were out of the sun but there were mosquitoes. Luckily I had mosquito repellent in my backpack. 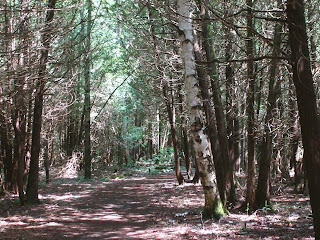 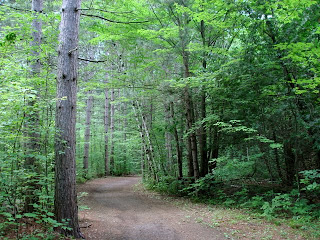 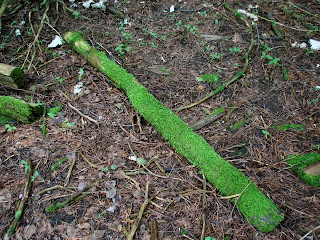 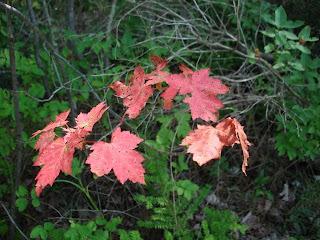 After we returned, I started reading again and we both had our afternoon nap.
Posted by A couple of newer paintings 2019 at 4:56 pm 1 comment: 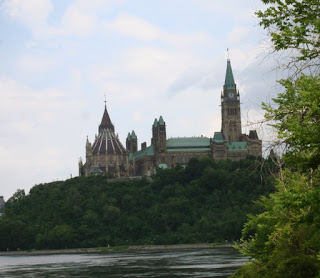 We had heavy rain and a thunderstorm at around 4 a.m. I got up to close the bedroom windows and be sure my computer was unplugged but Gordon was already up and had unplugged it. When I woke up around 8 this morning it was cloudy and humid so I cut my walk short.

We had no plans for today so I spent the morning reading and finished '7th Heaven' by James Patterson. I was doing jigsaw puzzles on Jigzone.com when it started raining which it did for most of the afternoon causing the internet to go out due to the heavy cloud. So I started a new Sarah Paretsky book, my fifth book this week winding up falling asleep for most of the afternoon. That was much more than a nap!

Since we didn't go out today, I'm putting up a photo that I took of Parliament Hill from Victoria Island earlier this week. The large round area on the left is the Library of Parliament.

We only have three more weeks till we head to Lindsay! Can you tell that I'm ready to be on the road?
Posted by A couple of newer paintings 2019 at 9:29 am No comments: 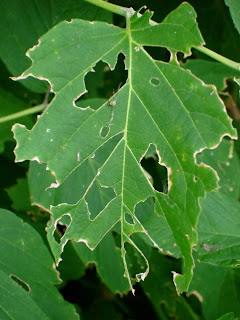 Today was another hot, humid day. Thank goodness for the breeze. Our high was 29C (85F).

After walking and breakfast and a couple of hours on the internet reading blogs and surfing, I left to do some shopping. I had quite a few places I needed to go to so I was trying to think of an area where they were all close together so wound up going to Barrhaven and I managed to get almost everything on my list!

When I got home I sat outside and read. I'm now on James Patterson's "7th Heaven". This will be my fourth book I've read this week. If the book is good, it doesn't take me long to get through it!

I took the leaf photo yesterday when we were at Westboro Beach. Looks like some sort of beetle is eating the leaves on this bush.
Posted by A couple of newer paintings 2019 at 2:42 pm 1 comment:

Appointments, Errands and A Photo Expedition

Today was a lot more humid with temperatures of 27C (83F), some cloud, some sun, rain, thunder, the whole gamut!

Gordon finally got through to Social Security this morning and they claim they tried to call and couldn't get through. What's with that? They're calling from the U.S. to a U.S. cell phone. Anyway he made an appointment to go down to Ogdensburg next week and see them in person. Hopefully it will be easier that way. They can get copies of what they need, in person.

I had another chiropractor appointment this afternoon. While we were out we got fuel and ran a few errands and also went to Victoria Island. Neither of us had been there before. They have aboriginal festivities there during the summer and there were lots of natives camping there in tents. They have a fenced off area that they charge to get in but mostly we wanted to just get some photos of the downtown skyline. There were too many trees to get much but I did get this photo of the downtown area with skies starting to look thunderous! 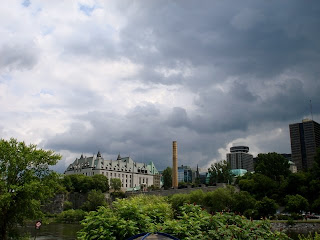 This old building is on Victoria Island. We think it was once part of a local paper mill. 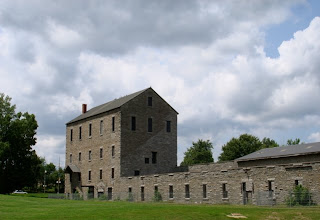 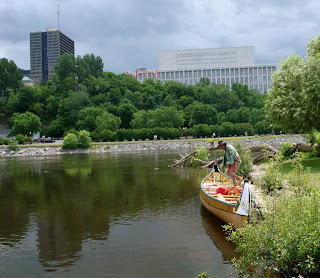 We also stopped at Kitchissippi Lookout where Westboro Beach is. Here is a photo of the cafe that overlooks the beach. 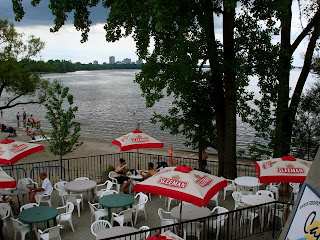 After all that, we came home and had a nap! Just after we got home we had a lot of rain and thunder.
Posted by A couple of newer paintings 2019 at 6:26 pm 1 comment:

I woke up to just a beautiful Ottawa summer morning. This is what Ottawa summers are usually like, clear blue skies, a light breeze and bright sunshine just like Arizona. I thought I'd better enjoy today as tomorrow turns humid and will be like that for about three days.
Our temperature got to 27C (80F) today with no humidity.

I'm not as sore today as I thought I'd be after my chiropractic adjustment and my muscles aren't nearly as sore as they were so I guess he's doing his job! I did go for my morning walk/run and this morning went to the industrial park as there was no threat of rain.

Gordon was supposed to receive a call at 9:00 a.m. today from the Social Security office regarding applying for Social Security. We waited all day and they didn't call so he started calling them late this afternoon. The line was busy, busy, busy, then closed! Really annoying!

I spent most of the day outside in my lawnchair reading and enjoying the day.

Our neighbour, John came over and said he had spoken with his friend and that we didn't need to get the Class A license. There is indeed something new coming out either this Fall or next Spring regarding RVers. Since he's already booked his appointment for his driving test and passed the written, he's going ahead with it on Friday.

Getting Out and About!

Today started out cloudy but it cleared later in the day and we had 24C (75F) for a high which was lovely. I went for my normal morning constitutional.

This is Gordon's favourite house to photograph. It's all by itself surrounded by fields. 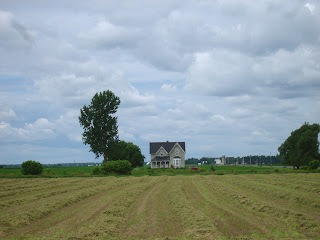 Gordon called our RV dealer this morning about our door lock and they had one in stock so we went out to pick one up and on our way back stopped at Jack Pine Trail for a while. Then back to the RV so he could install the new lock.

A streak of blue in a dark sky 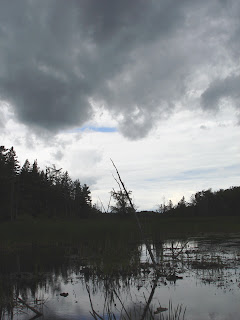 Black squirrel on the boardwalk 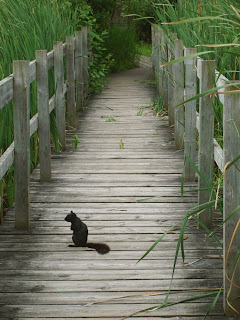 This frog was croaking at us 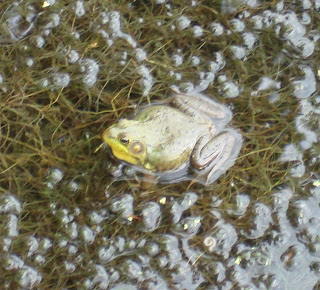 We both had chiropractor appointments this afternoon. This is the first time that it's actually hurt to have an adjustment. I don't know what's up with my back but the muscles are very sore and my back is tender. I expect I'll be even more sore tomorrow but he wants me to go back again this week. I've been having some headaches the last few days and that's something that I haven't had much of since retirement.

After the chiropractor we stopped at Ikea so Gordon could get some boxes to hold his back up photo DVDs, then we stopped to pick up a few groceries and home!

When we arrived home our neighbour was washing his truck and he says that the A license with R restriction has been rescinded. He was scheduled to take his driving test on Friday so he's waiting for a call from someone he knows that's high up in the Canadian RV Association to see if he can find out anything about it. He will keep us informed. What a supreme screw-up! I sure wish the goverment would get their act together on this!
Posted by A couple of newer paintings 2019 at 5:11 pm No comments:

Another Low Key Day at Home

We had a lot of rain overnight. Every time I woke up it seemed it was raining. This morning was humid although it didn't rain while I went for my walk/run. I didn't know if I should run or not as my back has really been bothering me but what they hey? So away I went and it hasn't seemed any worse for the rest of the day.

The day continued to be cloudy, humid and rainy so not much got accomplished except I finished my latest book by Jeffrey Archer entitled "A Prisoner of Birth". It was another excellent book. Where do people come up with these plot lines? Guess that's why I haven't written any books. I have trouble writing my blog! 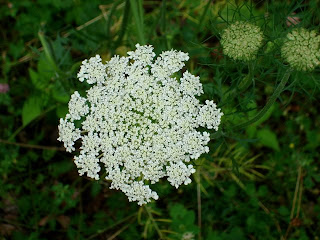 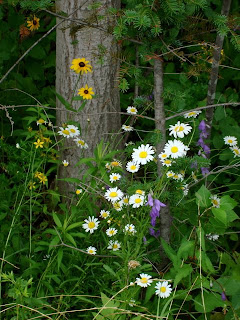 I got a phone call from my older sister yesterday while I was outside reading. She gave me some hints to check out for the monthly Where Are You contest that we try to solve each month. Her hints, however, were wrong! I did manage to solve it and submit my answer and no, I'm not going to reveal the answer! I called her this afternoon to give her the information so she can mail in her reply. Sure wish she'd get a computer and learn to use it! Email is so much better than using the phone. Many of you probably don't know how much I hate the telephone. I spent 26 years as an automobile claims adjuster much of it by telephone and I still cringe when I hear it ring!

This afternoon I started another book and it seems like it's going to be another good one. I also took a little walk around looking for some photos this afternoon after the rain stopped. 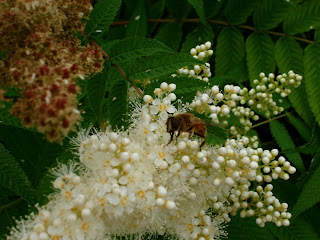 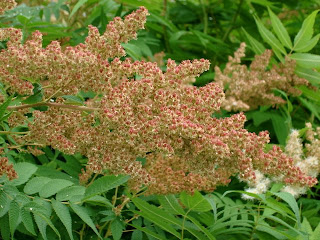 I was sitting outside when Gordon came out and then tried to get back in and the door wouldn't open! Luckily he was able to get in through a window. Our lock is broken so we'll have to get another one ordered. He's fixed it temporarily in the meantime but it's not something that we can rely on now.
Posted by A couple of newer paintings 2019 at 1:46 pm 3 comments: