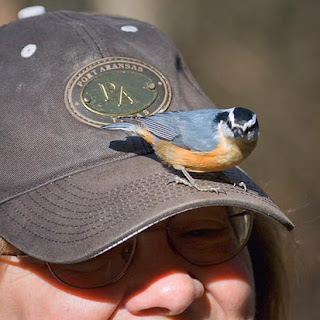 The day started off not too badly weatherwise. When I went for my morning walk the city of Kanata was setting up for the Santa Claus parade however it started raining somewhere around 11 a.m. so I hope that it was over by that time or Santa would have gotten wet!

The photo to the left was taken yesterday when we were on the Sarsaparilla Trail. The red-breasted nuthatch took a liking to my hat and there wasn't even any birdseed on it!

I went out and picked up a few groceries today, other than that I made stew for tomorrow. It's always better when it's been refrigerated for a day or so.

I read, chatted on Yahoo Messenger with Dee and generally lolled about!
Posted by A couple of newer paintings 2019 at 4:36 pm 3 comments:

Well, the good news is I got a reply from the lawyer in London, Ontario on my deportation problem. The bad news is quoted from his email to me:

It would appear as if you will be required to attend immigration court in the U.S. to formally reopen the deportation proceedings. Those likely relate to your permanent residence status years ago and a possible failure to apply to remove conditional status. I don't handle immigration court matters. You would be wise to seek an attorney in Buffalo who can do that for you.

So I sent him an email asking for a recommendation and he has complied with the name of a firm in Buffalo, NY. This just reinforces Gordon's and my thoughts that this ain't gonna be easy or cheap! So I'm bummed again. Since there are no immigration lawyers that I can find near the border in a US town that is close to Ottawa, it looks like I will have to go to the Buffalo area if I want to get this done and it's really not convenient right now with my sister in the hospital and pending eye surgery for me not to mention the winter driving to get there. I had such high hopes for this guy in London. He did indicate that the lawyer in Buffalo could file papers to allow me to cross the border to go to court but maybe it's just not meant to be.......

This morning we decided to go and find a trail so wound up on the Sarsaparilla Trail, another one that is fairly close to us. This one is also part of Stony Swamp. We started out on this trail a couple of years ago but for some reason didn't complete it and today the place was just crawling with kids. Must have been a PD Day so we didn't stay long. 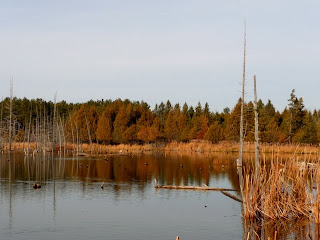 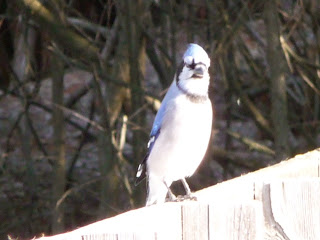 Part of the trail 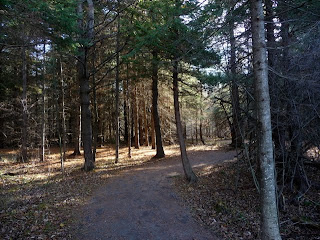 After that we took off in search of different areas of the Jock River that we haven't seen before.. Gordon read about it on line and wanted to see some different areas of it. So we drove around a lot and got some photos. At one point we saw a Great Blue Heron by the river. I thought they would have all left to go south by now. No photo of him as he took off as soon as the truck stopped.

An old barn along the Jock River 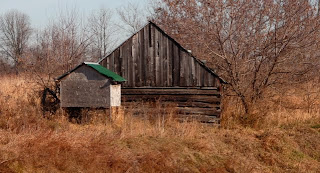 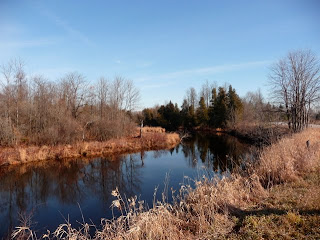 Still lots of geese around 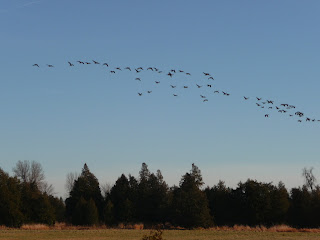 This afternoon I took Max for a walk on the Trans Canada Trail and he was full of burrs when he got home so his Mommy had to cut most of them out. I had pulled a few of them out on the trail and he is so good about it. No biting or snapping like our dog would have. He's a very gentle creature.
Posted by A couple of newer paintings 2019 at 9:16 am 5 comments:

I feel special when anyone leaves a blog comment but today I felt extra special to receive a comment from the blogger of all RV bloggers, Tioga George! Thanks for reading my blog, George. And thanks to everyone else who wades through my daily boredom!

Even though it was -5C (23F) this morning I had a wonderful, peaceful walk. The sun was shining but it was also foggy so it was very pretty. After I got moving I wasn't cold at all. 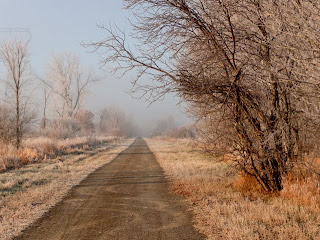 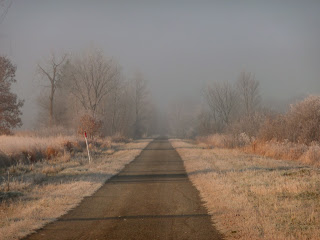 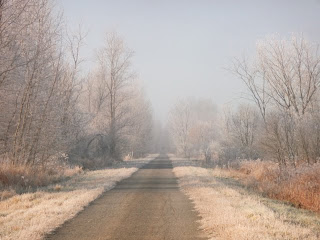 I had been told about an Immigration lawyer in London, Ontario by a friend. His son used him when he wanted to move to the US to be with his fiance so this morning I sent him an email with details of the deportation problem and he emailed me back with a few questions which I have now answered. I'm hoping that finally we have someone who can help!

Gordon and I went out this morning to do a little shopping. He needed some clothes to wear around the house and I needed to pick up a few groceries. Then we stopped at Tim Horton's for coffee. I don't seem to be having a problem with coffee right now. Yay!

I had a chat with Dee on Yahoo Messenger this afternoon. She always brightens my day!

We're having breakfast for dinner tonight. We're making buckwheat pancakes with bacon. Never tried them before. Hope they're good!
Posted by A couple of newer paintings 2019 at 9:12 am 7 comments:

All the best to our brother-in-law, John. Today is is birthday.

A lot of businesses are closed at least for the morning here but places like the Government offices, liquor and beer stores, banks etc. have the day off for Remembrance Day. Since we're retired, we also have the day off, but then we have every day off!

And so to our veterans as well as our military personnel wherever they may be in the world, THANK YOU!

This morning I made gluten free spice cookies. They're a little dry but most gluten free baking seems to be dry. They taste pretty good though and are very spicy. Too bad there's so much ginger in it. Ginger is one of the many things that I have a sensitivity to.

This afternoon I went with Nancy to make arrangements to replace her kitchen counter and she decided to go with a new sink for the kitchen as well. The sales lady at the kitchen department at Home Depot was so nice and helpful! Everything will be done before Christmas. It will look so nice!

I've still heard zip from the lawyer. I think we'll have to go to their office and get in their face!
Posted by A couple of newer paintings 2019 at 9:11 pm No comments:

I went for a quick walk/run this morning. I was up early as I was following Nancy to the dealership to get her winter tires put on her vehicle and then brought her home rather than having to wait in uncomfortable waiting room chairs. While there we had a look at the Pontiac Vibe. Nancy's Saturn Vue is 6 years old and she's thinking of trading but the Vue only has 61,000 km (37,800 mi) on it

We hadn't heard from them by noon so I took her for her doctor's appointment and then we went and picked up her vehicle. It was all bright and shiny. They still wash cars that are in for service at this dealership. It's rare these days.

From there I took off to Walmart and then the grocery store.

Oh, I did call an Immigration lawyer today and left a message on her voice mail but haven't heard back from her.
Posted by A couple of newer paintings 2019 at 6:10 pm 1 comment:

Nothing much to report today. It was fairly warm 17C (63F) but cloudy most of the day.

We took the truck in for a check up to be sure it was okay for winter and it checked out fine. Other than that Nancy bought me a water pillow at the chiropractor's when she was there today. She has one and loves it.
Posted by A couple of newer paintings 2019 at 6:05 pm 1 comment: