It was a bright beautiful sunny morning so I had a nice walk along the Trans Canada Trail. I started out going west toward Stittsville (western Ottawa suburb) but not as many people walk on that part of the trail in the winter so it wasn't nice walking. I turned around and headed east which is the way I usually go and it was much better as the snow is packed down. 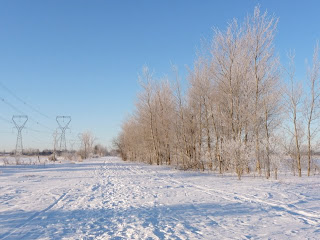 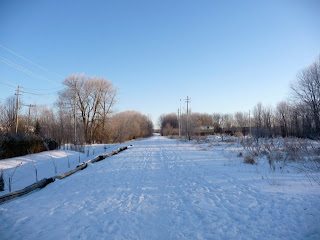 Nancy left today on a week's vacation on the Mayan Riviera so we're house and dog sitting this week.

Poor Max is lost without her. He keeps looking at the door that goes to the garage waiting for her to come home.

This afternoon I decided I'd better go out and pick up some groceries, freezing rain forecast for tomorrow so we'll stay housebound. No point going out in that unless you have to.
Posted by A couple of newer paintings 2019 at 7:07 pm 2 comments:

I was up at 6:10 a.m. today. Nancy and another lady ride to work together but Nancy had an appointment this morning so we took her to her appointment and then dropped her at work.

Then we went in search of the snowy owl. As you can see, we found one! Actually we saw another one but he was far away on the roof of a barn. I saw him through my binoculars. Even Gordon's camera couldn't get a good close up of the one on the barn roof. They are indeed a majestic creature. This one came flying toward us as we drove down the country road and landed on top of a pole right beside the road. He let us walk pretty close to him before flying away. 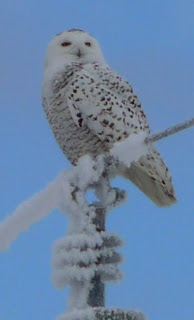 The frost was very heavy on the trees and poles this morning which made for some beautiful scenery. 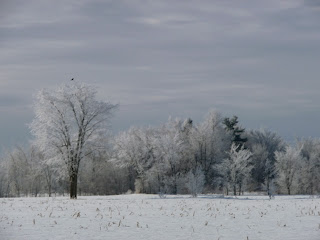 There was even some frost on this old barn. 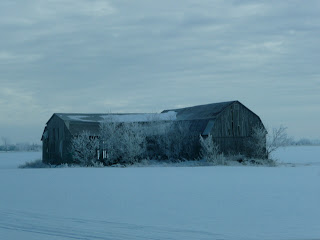 You can see how thick it was from this close up. 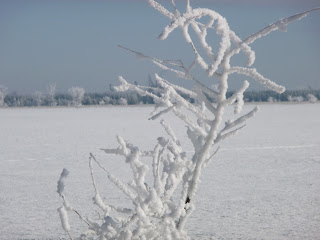 Frosty trees along a frozen river. 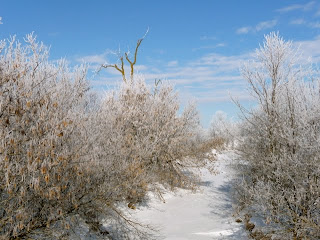 We got home around 2 p.m. and I went for a long nap! Not used to getting up at those early hours anymore since we're not traveling!

It was -6C (21F) this morning, -12C (10F) with the windchill but it was a nice morning for a walk through the residential areas around here. It was still cloudy but the sun came out early in the afternoon. It was a welcome sight!

I was reading Travels with Miranda this morning. She has a Glendale Class C. Our Titanium is also made by Glendale. She said that she read that Glendale has filed for bankruptcy. That's a real bummer since they make an excellent product. We have been very happy with our Titanium.

My appointment with the eye specialist was scheduled for late this afternoon. So away we went only to find out when we arrived that the doctor had been called away on a family emergency. They tried to call us but our cell phones are 361 area code and the area code for Ottawa is 613 so people always get it wrong. Maybe we should change to another area code. I guess we'll wait till we see if I'll be able to go back to the U.S. before going to the trouble.

I asked the receptionist when they were booking cataract surgery - JULY! Lucky I'm getting started this winter!

As much as I enjoyed seeing the sun today, it sure was brutal driving home after my appointment this afternoon. You could hardly see the traffic lights. I'm glad to see it anyway!
Posted by A couple of newer paintings 2019 at 2:54 pm No comments:

Today was colder -5C (23F) and consequently we actually saw some sun this afternoon.

I did get out for my walk this morning finally. I've been really lazy about it the last couple of days. The housecleaner came this morning. She started Wednesdays today instead of Monday and she comes later which works out better for my morning routine.

Other than that it was same old stuff - reading and watching TV.
Posted by A couple of newer paintings 2019 at 6:34 pm 1 comment:

We had another fairly warm day with a high of 3C (37F) but it was still cloudy. The forecast says maybe some sun tomorrow!

I had an appointment today to have my teeth cleaned so I headed out early as I needed to pick up corn tortillas for Gordon. That's what he uses instead of bread. I had a nice chat with the lady in the health food store where I buy the tortillas. She's very knowledgeable about food sensitivities, celiac disease etc so it's always interesting to talk to her.

From there I headed to the dentist's office. I was still early so stopped in one of the discount stores that is in that mall. Then I got my teeth cleaned and the dentist checked them - no cavities and I still had insurance so Nortel hasn't cancelled our extended health care yet!

From there I went to the Carlingwood Mall. I usually wear sweats around the house but they're wearing out. I had planned to buy some new ones when in the US this winter but since that didn't happen I was looking here. The things with women's sweats here is they usually don't have pockets, I hate stuff with no pockets! It's also not that easy to find petite lengths so I went to Sears. The sweats didn't come in petite sizes (I don't like to hem as I can never get them even) so instead I found some jeans on sale and bought two pairs for about $15. They're lightweight so I'm happy with them. After a stop at the bank I made my way home before rush hour and before it got dark.

It's been so long since I've seen sun here, I can't remember what it looks like. I see it in the forecast but they keep moving it ahead. Right now it looks like we might see some on Thursday.

So that was my day. I made meat loaf for dinner and Nancy made mashed potatoes for her and Gordon. Since I no longer eat potatoes I had brown rice and we had some brussel sprouts for veggie.
Posted by A couple of newer paintings 2019 at 7:16 pm 4 comments:

I was feeling much better this morning. I have no idea why I didn't clue into taking an extra Nexium before. Not like it's the first time this has happened.

So, we decided to take another trip over to Quebec near where we went last time as there is another covered bridge in the same area. 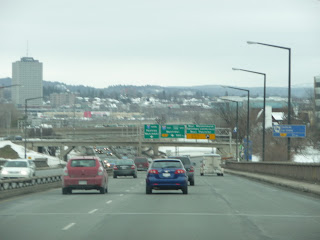 First we drove through the little town of Old Chelsea and stopped to take a photo of the skiier at Camp Fortune. 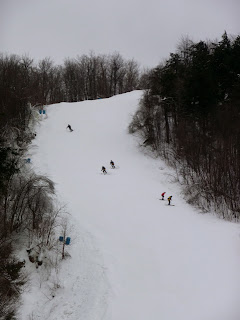 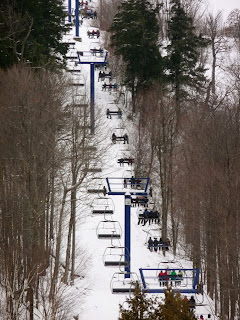 Then we drove along Meach Lake. 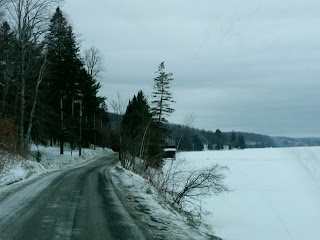 Then it was off to find the covered bridge. This one is still in use but is much smaller than the one near Wakefield. 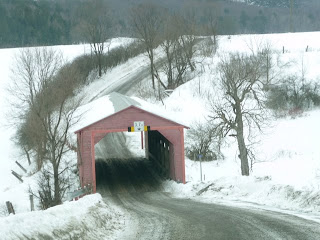 There is lots of construction on the freeway that we travelled today. For those who don't know FIN in French means End as in End of Construction. 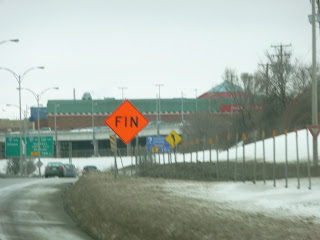 On our way back to Ottawa we stopped downtown to see Rideau Falls and saw a lot of trees covered in red berries. 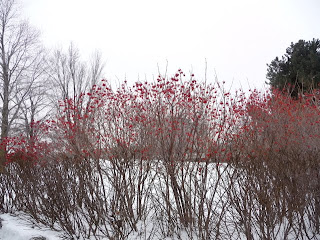 This is the bridge to Quebec that we drove over twice today. 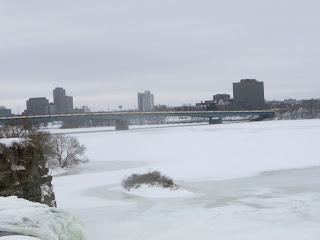 Here is the partially frozen Rideau Falls. Rideau Falls is quite close to our Prime Minister's residence here in Ottawa. 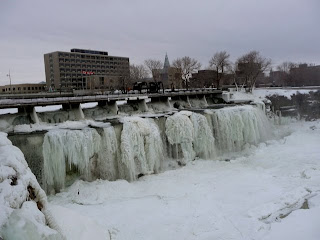 From there we stopped at a couple of grocery stores to pick up some fruit and then home for a very late lunch.
Posted by A couple of newer paintings 2019 at 7:10 pm 2 comments: