We had called a plumber a couple of weeks ago and he was supposed to get back to us at the end of that week but we never heard from him. I found a plumber online that lives right down the street from us and we had made arrangements for him to come this morning.

He arrived and we went through our list. He had brought another guy with him, both of them are old timers. We went through our list of stuff and a couple of things he talked me out of even though it would have made him money. I like that. Anyway, he's to get back to us on Tuesday with a price.

When we moved in it took us a while to notice that the house doesn't have a door bell on either door. Very odd. Anyway today we finally bought a wireless doorbell that will work for both doors. We also needed an outdoor trash can as we've been using bags however they tend to attract critters and we don't want critters in the garage.

Gordon is also fixing up his office so needed a desk lamp and a trash can so we got those items. Setting up house is costly!

Here are a couple of photos of the living room. 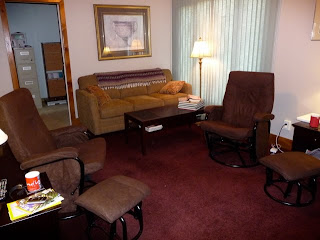 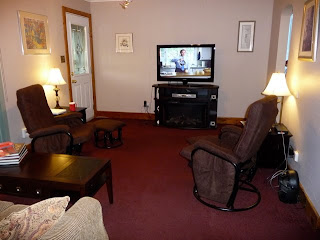 After lunch I was doing laundry and I lay down to read then I thought that since it finally stopped raining I should go for a walk. I haven't been nearly as diligent since we moved here and even before because of my shoulder so I took off and walked the circle around the river. I walked 4,862 steps and burned 203 calories. I have no idea what that is in miles but it took about 45 minutes. It seems like a long way but it's really pretty walking on the path by the river. I should have taken my camera but I didn't want the extra encumbrance and since it was cloudy, I didn't bother. When we have a nice day I'll take it with me.

I had gotten my second wind or else the walk gave me energy but I vacuumed and dusted the house with the exception of the room where the oil tank is. As far as I'm concerned that room doesn't exist and keeping the door closed works for me! Oh, for a gas furnace!

The sun started to shine so we went out for sunset. We went to the RV Park in town which is called Victoria Park. Here are some photos: 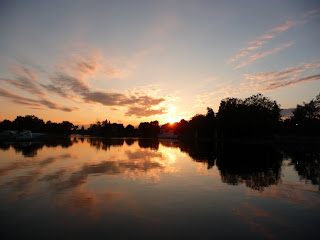 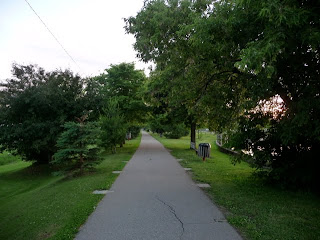 After that we went for a drive to Otter Lake - more photos. This is a great sunset spot about 15 minutes from the house. 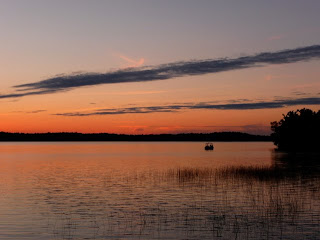 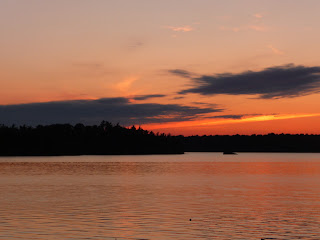 I can't believe how tired I was this morning and how nice it was just to lie in bed.

Gordon had already been to the hardware store this morning and gotten what he needed to mount his DVD cabinet on the wall. Now he has a place for his photos (it's barely half full). 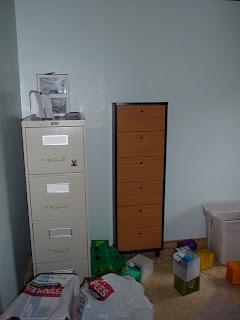 Then he needed to go to Staples to get some sleeves for the DVDs. I went along as I wanted to order a stamp with our address on it. While there I also needed to get ink for our inkjet printer. Gordon looked at the price of ink for the inkjet and then started looking at laser printers. Needless to say, we came home with no ink for the inkjet but we do have a new laser printer!

Dee and I finally got to do chat and video on Yahoo Messenger! We were so excited!

Since not much was on TV tonight and our VCR isn't hooked up yet (yes, we still have a VCR), I thought I'd watch the Desperate Housewives finale on the internet since we now have high speed. Well, imagine my surprise when I find out that you can't watch a full length streaming video outside of the U.S. What's with that? Do they think only Americans are interested in this stuff? ABC needs to get with the times!

This morning Gordon took the truck in for an oil change. It's not nearly so far to go anymore! While he was gone I decided to line the drawers in the kitchen and bathroom with the wallpaper that I bought at the thrift store the other day. I did eight drawers in the kitchen and four in the bathroom as well as the bottom of the bathroom cabinet and I still have some left but not enough to do all the kitchen cupboards. I think I'll use it to line the cupboard in the laundry room. 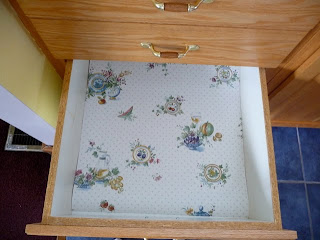 We had to go out this afternoon to pick up some things and Gordon thought it would be a good day to go to the RV. We haven't been there in about a week and a half so he took the weed eater along. He looked after the long grass, I packed up almost all of the inside. There's one cupboard left for another day but my basement is bulging! I think I'm going to have to have a garage sale!
Posted by A couple of newer paintings 2019 at 6:00 pm 2 comments:

To see the photos that Gordon took of Danica's graduation ceremonies and the aftermath, click here.

It was a low key day for us, both really tired. I had to go out and get some groceries. I'm also looking for a clothes hamper that will look nice in the bedroom since that's the only place I have for it. Sears has an assortment of bamboo hampers (if they have them in stock) but I'll check out some other stores first. The ones Walmart has are plastic or canvas and aren't what I'm looking for. When we had the house I had found a really nice wicker one at Winners so I'm hoping that when I go to Ottawa on Wednesday I might find something. Right now I'm using one of my collapsible net laundry hamper that I used in the RV. Not really very esthetically appealing but okay for hauling laundry down to the laundry room!

I was up and ready to leave for Ottawa this morning shortly after 9 a.m. My first stop was Ikea and it took about an hour to get there. I was disappointed. They didn't have the magazine rack that they used to have that I liked and the cord cover for our bedroom TV looks like a gray vacuum cleaner hose. All I bought there were some steak knives.

From there I went to Bayshore Mall. I was still early to meet Najat for lunch. I worked with Najat at the last place that I worked before I retired, Breconridge. She has been off work as she had an operation on her back but is returning on Monday.

I stopped first at HomeSense and found some laundry hampers but they were all round. I don't want round. I went to Winners but they don't have that sort of thing anymore probably since they own HomeSense and it is just downstairs from them. Guess I'll have to order from Sears. The good news is it says on sears.ca that they are in stock.

Then off to Moxie's for lunch. Najat had invited Sue who I also worked with to come as well so that was a surprise. Moxie's were very accommodating for my food sensitivities and I wound up with a salad with sliced chicken on top. Najat paid the bill as well. Thanks, Najat!

Back to my shopping after lunch. I got some coasters at HomeSense and a meat thermometer as I found out when we went to Nancy's that mine no longer worked.

I was also stopping at Nancy's to pick up some of our stuff that she found when packing up as I hadn't seen Max forever. When I got there, Nancy was home. Today was one of her compressed days so we got to have a chat and I got lots of doggie hugs.

Back on the road, a bit less than an hour to get home as I was coming from Kanata. It's nice driving through the country, very little traffic!
Posted by A couple of newer paintings 2019 at 9:22 am No comments:

Well the Oriental spaghetti salad verdict - it was very good!

We had rain all morning and Betty drove from Lindsay to Smiths Falls in the rain. It took 3 1/2 hours! She spent a couple of hours with us and got her first look at our little house.

Luckily it cleared later in the day so she didn't have to drive the rest of the way to Ottawa in the rain.

In fact, the sun came out later in the afternoon and I got to go for a walk and even got in some running. My new ipod nano is great!

Gordon and I went out at sunset and although the sunset wasn't a great one, I took a few photos in golden light. 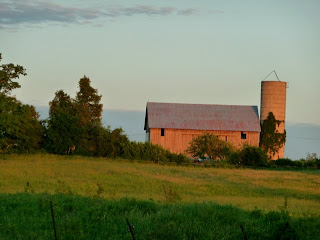 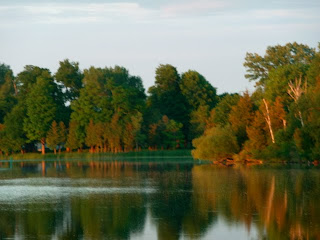 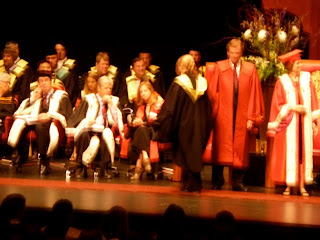 The Convocation took place at Southam Hall in the National Arts Centre in downtown Ottawa.

After the ceremony we took some photos. We are all so very proud of her!

This photo symbolizes Danica on her way up (on the stairs) - her uncle's idea. 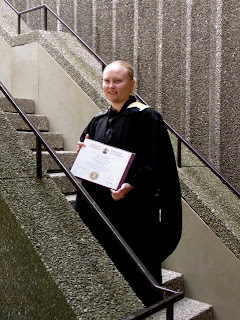 With the Parliament Buildings in the background 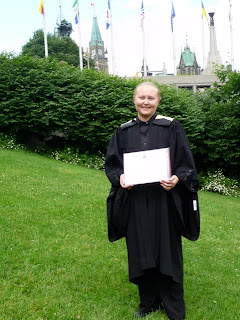 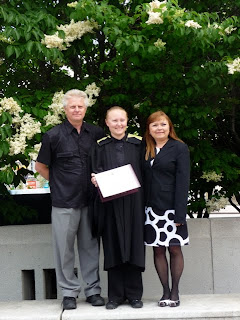 From there John and Margie, her parents took us out to lunch at Swiss Chalet near their place. They chose this as they knew we can both eat their food.

Back at their house, Danica received a few gifts, then we headed for home after first stopping to return the comforter set that finally came in from Sears.

We got Danica a glass pendant in her favourite colours, black and orange. 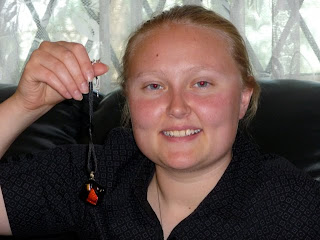 After we got home, we both took a nap. I slept like the dead!
Posted by A couple of newer paintings 2019 at 8:44 am No comments: