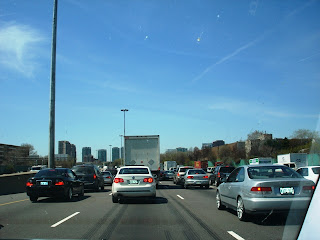 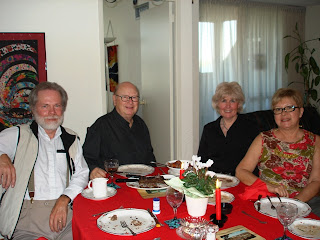 We picked up our rental car this morning and after returning the truck to the RV, we headed for at 9:30 a.m. All went well on the 401 till just before when traffic backed up both on the Express lanes and the collector lanes, then all of a sudden traffic thinned out and away we went until around Hwy 400 when it backed up again. It wasn’t bad though as it used to take me 30 minutes from Betty’s condo to State Farm in and this took us 45 minutes. It seemed like a long time though.

We arrived at Betty’s condo around 1:00 p.m. and chatted for the afternoon. Betty also got caught up on my blogs. Luckily we were able to pick up wifi from her condo.

Garth arrived shortly after 4:00 p.m. and Betty’s friend, Bonnie whom I’ve known for years and also traveled with arrived for dinner around 6:00 p.m. Betty prepared a really good dinner of roast beef with potatoes, carrots, salad and ice cream for dessert.

We’ve got a long day tomorrow so will be hitting the sack early!

A Visit in Brockville

This morning was sunny again and 9C (48F). I actually had to take my jacket off on my walk this morning. The sun was warm!

This morning I decided I could see some roots so I coloured my hair. It’s so much easier to colour when it’s short.

I got an email from my Aunt Ruth in this morning so we went down to see her this afternoon. I can’t believe I forgot to take photos. Her son-in-law, Glen came in while we were there and I got distracted. I’m glad we got to see Aunt Ruth and having Glen arrive too was a bonus!

The store called when we were on our way to to let me know that my duvet cover was in so we went straight to the shopping mall and picked it up and had Subway and Taco Bell for dinner.

When I got home I put the new duvet and shams on to be sure they fit and then started packing for our weekend in , and possibly .

I may not post tomorrow night as we’re staying at Betty’s and she doesn’t have internet access. 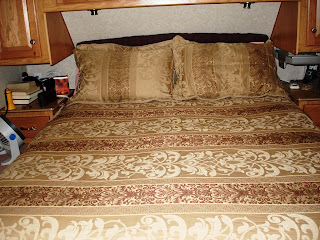 Laundry and Not Much Else

Today was a bright sunny day with a little breeze. When I got up the temperature registered at 9C (48F). I saw the peahen this morning. She looked like she was waiting for the store to open. I saw her hop up on the bench but then she started looking in the window – too funny! 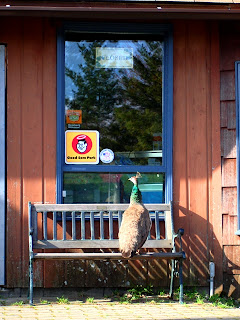 Because of my gastrointestinal relux disease sometimes I get what feels like a sore throat even with the medication so I have to sleep basically sitting up. If I was in a regular bed in a house I’d raise the head of the bed on books or something but you can’t do that in an RV so I usually sleep on the couch for a couple of nights. That doesn’t give me a very good sleep and after only one night it hasn’t helped my throat either but I’m not sure I can take another night on the couch as it doesn’t do my back any good. It’s good for naps during the day though.

I had a huge pile of laundry to get done but when I went for my walk this morning the laundry building was being worked on by some construction guys. They told me they were replacing the roof and the laundry would be open so around 10:00 a.m. Gordon drove me over (there was no parking in front of the laundry today due to the roofing and since we just got new tires yesterday we didn’t want to be anywhere near nails) and helped me take the laundry in. It took over two hours to get it done as there are only four dryers and I couldn’t get enough washers when I first arrived but at least now it’s done so we’re ready for our trip to and this weekend.

While at the laundry, I chatted with a lady who has been here for six years. She has a park model in the area where you can stay for 9 months of the year. The other three months she either stays with friends or rents a hotel room in Gananoque. She says the reason for all the units here that are for sale is mostly circumstance – spouses passing away, jobs taking people elsewhere etc. She said it’s a lovely park and the people who own it are very nice and have owned it for 28 years. So that answers a question I had earlier this week.

This afternoon after putting all the laundry away, I just sat around and read and did puzzles. Our high today was 17C (62F) 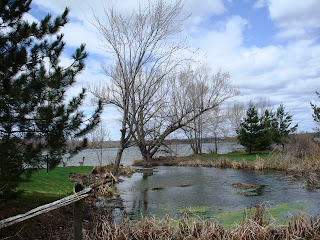 I took this photo yesterday on my morning walk. Pretty, isn't it? 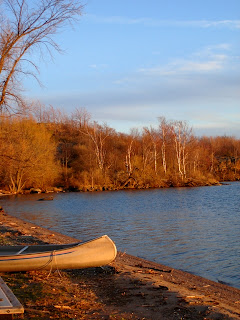 This photo was taken at sunset. It's within the campground. Very pretty lighting.

We now have confirmation that we will be at Tranquil Acres near from May 8th for at least a month depending on medical appointments.

The sun was shining when I got up so went for my walk around the park. I was specifically looking for the peacocks but they were specifically avoiding me apparently as all I saw were ducks and geese and of course robins, starlings etc. The sun went behind a cloud shortly after I got back.

The Dodge dealer called this morning to let us know the tires were in and we made arrangements to go in for 1:00 p.m. to have them put on. While Gordon was at the dealership, I got my hair cut and walked around the Cataraqui Town Centre. I actually found a nice duvet cover and shams for a good price. Unfortunately they didn’t have queen size in stock but should be in by Thursday so the clerk will hold a set for me when they come in.

April Expenses
We returned to on April 24th, therefore to make things easier, I’ve transferred all the amounts from the 24th on into American funds. April was NOT a good month!

Our biggest expense this month was the truck service, first to have the oil changed in the rear which is always about $7-$800 and then our deductible for the warranty work on the differential. Since we were traveling north this month and diesel just kept going up and up, we had a large total for fuel. We also had a big month for gifts so our total for the month in funds at $3909.48
is a killer for being in the That sound more like an Ontario total! Sure hope we don't have many like that one but looks like May might be !

We got quite a few things accomplished today:
1. Returned rental
2. Picked up the behemoth (our truck)
3. Got some things at Walmart that we needed
4. Deposited some cheques that came over the winter
5. Got some groceries
6. Vacuumed and washed out the interior of the truck (I think I finally got all the pelican poop out from our ferry crossing from Aransas Pass to Port Aransas)

When I got up this morning it was already 10C (50F), warmer than it had gotten all day yesterday but there was still some misty rain falling so I only walked to the dumpster with the garbage and back again.

The sun came out around 10:00 a.m. so Gordon went out and took some photos but the sun only shone briefly so he was back quickly. I sat around and read and looked at the Sears catalogues that I had gotten with my mail.

My sister had mentioned that she and her husband might drive from to see us today so I hung around till 1:30 p.m. and then we went for a short drive north on Hwy 15 as the sun was going in and out and there were some interesting clouds in the sky. We stopped a couple of times to take photos but returned to the RV after about an hour. The sun was definitely out in full force so I sat outside to read but had to change to shorts it had gotten so warm in the sun. The thermometer was reading 18C (65F) which was our high for today. 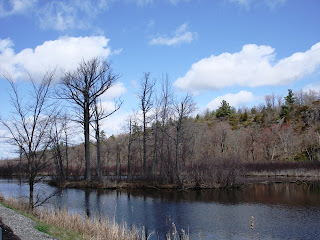 One thing we’ve found with our rental – a Dodge Dakota truck – V8 is we get much better fuel mileage (when we’re not towing) with our 1 ton diesel than with the V8. You can almost see the gas gauge moving in the Dakota. We get our own truck back tomorrow. YEAH! Even though I don’t like driving our truck around the city all that much, I like it better than the rental!

Late this afternoon we took a walk around the park hoping to see the peacocks but all we saw were a couple of muscovy ducks, a mallard and a beige duck, probably a female of some species. 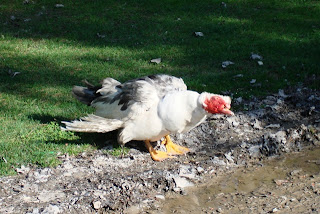 A new Desperate Housewives tonight!
Posted by A couple of newer paintings 2019 at 8:08 pm 1 comment: