We’re scheduled to leave Tranquil Acres for Cobourg in a month. Time is sure flying!

We had some sun this morning but it quickly turned to clouds with periods of rain and drizzle. I walked and my heel was a little better but I still didn’t feel like walking a long way.

Late this morning we drove to the Carleton Place Library. I had put some books on hold via their on line site so we picked those up and then drove down a side road, Glen Isle Road that we had been wanting to see. This road takes you to the island that’s across from our campground. There are quite a few houses and a couple of farms on the island. I hadn’t realized it was that large. The barn photo below is one I took there. 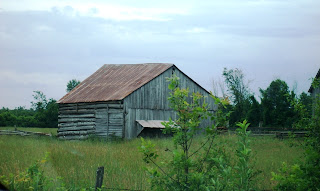 It was just a short outing today as it was cloudy and not conducive to photography (except for flowers). So, I shot this pretty lily on our way back into the campground. 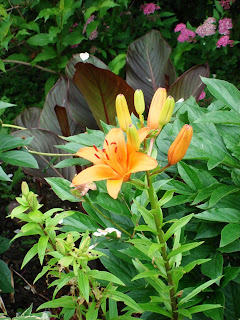 This morning was much nicer 19C (67F) and sunny with no humidity. I put a bandaid on my blister from yesterday and started out only to find that my other heel seemed to be getting a blister so since I had brought a bandaid with me I put it on my left heel. As I was about 20 minutes into my walk my right heel started to hurt again. I didn’t have any more bandaids with me so I had to suffer. I think it’s just the same blister that is hurting even with the bandaid on it. Sure hope these shoes get broken in soon. The good news is my back is better.

Today we had to go in to as Gordon is developing an abcess up near the base of the root of a tooth so he got penicillin from the doctor. We filled it and then came back to . We stopped at the Independent Store in to pick up a few things then back to the RV to read and have a nap!

We had some fairly heavy rain on the way back to but it cleared up and is bright and sunny now!

This is a photo I took of our RV a few days ago. 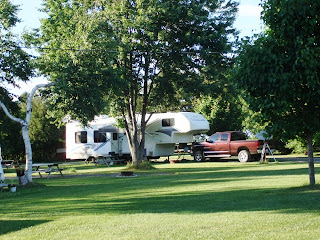 Another Stay at Home Day

It was 17C (63F), cloudy and damp this morning for my two mile walk. I wore my new sneakers and the right one gave me a blister. Hope that will clear up when they’re broken in. I didn’t have any problems breaking in the last pair.

Today was spent just hanging around the RV. I made some potato salad and packaged up the meat I bought yesterday so that it will fit better in our little freezer. Other than that I read. Glad I have those library books!

We had a bit of sun on and off this afternoon but it was generally a cloudy day. 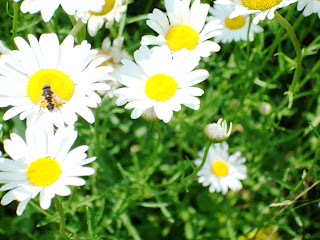 The photo is one I took a few days ago of daisies in the garden here at the park.

Happy 4th of July to all our neighbors (notice I didn't put a "u" in neighbors in honor (no "u) of the U.S. Independence Day) from south of our border!

Today was a cloudy day with some rain this afternoon. I got up early and got ready to go in to as I had lots of errands to run. I left around 8:30 a.m. and returned around 3:45 p.m. so it was a long day and I still didn’t get everything done that I wanted to do. I was tired and my back gave out on me. I stopped to try on some new sneakers and the salesman said my old ones were shot which is why my back and groin area have started to bother me again. He said “Listen to your body!” Needless to say, I bought new ones. These have a little more support and bounce than my old ones had so can’t wait to try them out. I didn’t walk this morning as I knew I was going to have a long shopping day and I was saving my energy.

I took this photo a couple of evenings ago when we walked around the park. He looks like he's waiting to be turned into a prince! 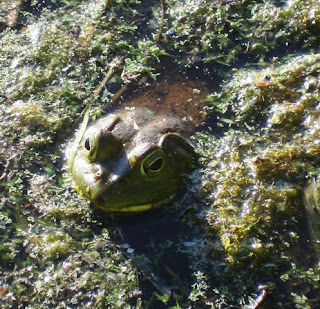 It was surprisingly sunny and warm at 19C(66F) with very little breeze. I headed east down Cram Road but in the distance I could see a couple of large black shapes on the road so not being sure what they were (I expect cows), I turned around and went south on Appleton Side Road instead. I expect some cows had escaped however there could have been a bull and with bears in the area a couple of weeks ago, I decided to be safe rather than sorry. There were actually a couple of others out walking this morning as well as someone on a bike. Summer is here!

After breakfast my internet time and vacuuming the RV, I went outside to read but fell asleep for a while instead. Those chairs aren’t really meant for comfort!

This afternoon I read, played on the computer and made BBQ spareribs for dinner. I rarely make them as they’re fiddly and messy to eat but I really like them. I got a recipe for the sauce on the internet and it sounded good so we’ll see!

Our Visit to Morris Island Conservation Area and Other Points

Today was a nicer day although we did have some cloudy periods. It was sunny and breezy and 14C(58F) as I did my two mile walk again. I decided to take my camera this morning and of course since I did that I saw zip!

Since it was a nice day but not too hot we decided to go to the Morris Island Conservation Area near . We had been there last year but it was so hot we didn’t walk very far. We took a different trail today, this one going through the woods. We started out on a nice gravel path 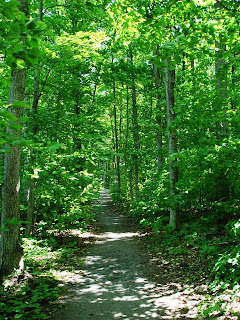 but eventually it became a path with a lot of rocks and tree roots, quite hard to walk on. You had to watch every step you took or you’d trip really easily. 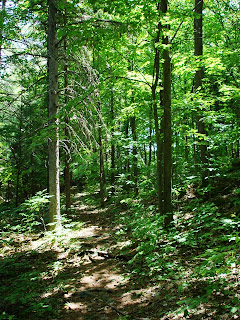 We didn’t see a lot, a chipmunk, but lots of pretty white birches. I did manage a photo of one of the pretty black and white dragon flies. 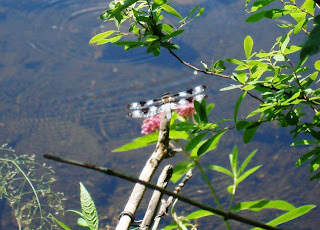 And here's one of the pretty vistas. 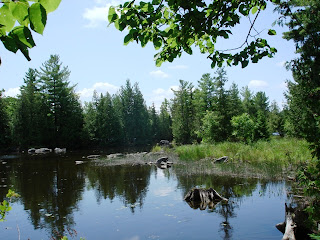 Eventually we got back to the causeway where we had walked last year. We had hoped to see lots of dragon flies as they were plentiful last year but there were hardly any this year. Could it be that lots of people were walking around with nets? 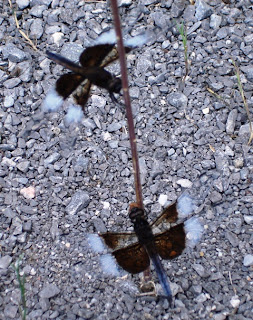 At one stop along the road I managed to get a photo of this green dragon fly. (We don't carry nets, only cameras.) 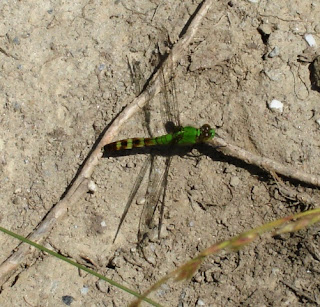 We had our picnic lunch today at a picnic table near the water but in the forested area then drove around for a while ending up in Pakenham then on through Almonte where we took the back way on Appleton Side Road to our RV park arriving home mid afternoon.

I snapped this photo of the Mississippi River at Pakenham. 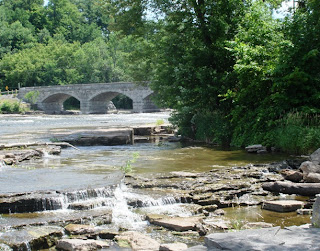 I sat outside and read for a while. The temperature reached about 24C(75F) today. Just about perfect! We did have a short shower late in the afternoon but it was very short!

June was a little better than May but we still had a lot of extra expenses.

On the good side of things, we didn’t spend much in fuel and we did better on groceries without starving ourselves (not likely to happen). We also didn’t eat at restaurants much and confined our activities to the outdoors.

Considering all the extra expenses, I’m happy with our figures for June!

It was 11C, windy and partly sunny as I did my 2 miles this morning. I saw abundant wildlife – my deer, although she wasn’t on the road, she was lying in the grass by the bush area and all I could see was her head. While I was looking at her a Baltimore oriole flew by and then as I was approaching my turnaround point, I saw something that resembled a dog in the ditch but it was definitely not a dog so a wolf or a coyote. It didn’t have hair around its face and it looked a darker brown so my guess was a small wolf. It didn’t stick around

When I got back we got the tanks dumped so we’re good there for another couple of weeks.

This morning I was looking for somewhere to go so when I got on the computer I was checking out the Mill of Kintail which is close to us and came across the Purdon Conservation Area. We were there last year but were too late for the orchids. They are supposed to be in bloom from mid June to mid July so we decided to go today. Lucky we went today as they are just about finished.Since the day was quite cloudy it was good for shooting photos of flowers but not much else. Below is the 'Showy Lady's Slipper Orchid' and the 'Pitcher Plant'. The Pitcher Plant catches insects almost like the flycatcher plant. 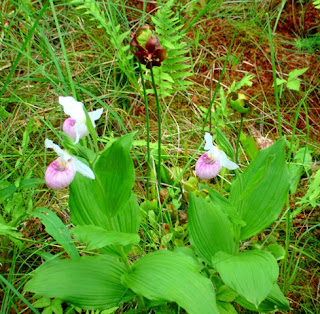 Below are more of the Lady's Slipper Orchids 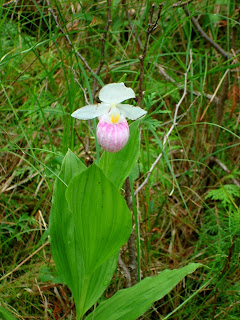 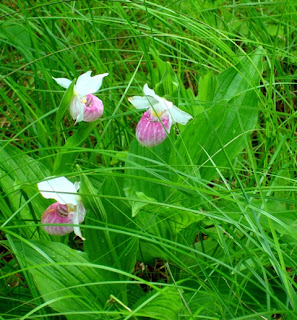 And one lonely bog or water iris 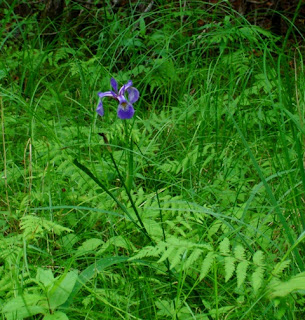 We had packed a lunch today so decided to stop in Perth on our way home and have our picnic lunch at the park in town along the Tay River. It is a very pretty park and another place we want to go back to. Today was quite chilly for a picnic. I think we got to about 17C (63F). 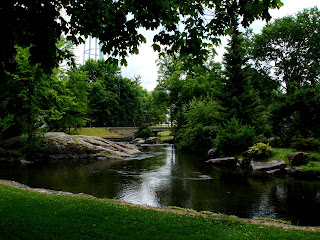 On our way home we went down a side road that we've been talking about checking out to a place called Scotch Corners. Scotch Corners is a couple of businesses and about five houses but there is some pretty scenery along the road, some wetlands and old barns so we're glad we took the detour.

We also stopped at the local grocery to pick up a couple of things as they are closed tomorrow for the holiday.