I was up at 7 a.m. to go to what I thought was a five home garage sale on Broadview Ave. We drove along Broadview-no garage sales so we came home and I looked it up. It was online and the sale was last week! So, I checked the local paper and found one at Port Elmsley. We headed in that direction and I found a storage unit for the basement for $50! We had to come home and get the truck to bring it home. I now have storage, finally! 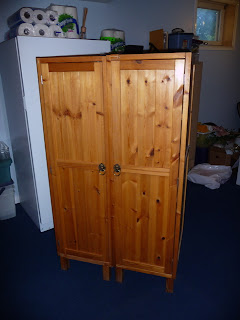 Gordon then took the car for it's first oil change and when he came home he said he had seen another garage sale on his way home. So we went to that one but didn't find anything.

The other day when I made bread I put gluten free gluten in it. It came out with more elasticity than normal. I haven't decided if it's worth purchasing it as it's $6.79 for about a cup. I only used 1/4 cup of it for a loaf of bread. The jury's out on it right now. 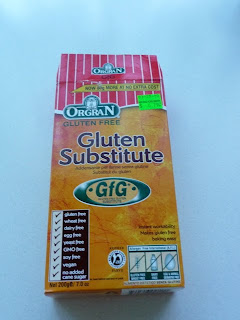 We came home and Gordon got the towel racks put up in the bathroom and then I put the border up so the top edge of the wallpaper looks much cleaner. It also spruces up the wallpaper.

I slept later this morning since I got up so early (for me) yesterday. My lower back was also bothering me quite a bit yesterday so I took 1/2 muscle relaxant which contributed to my long snooze.


This morning I took my camera on my walk so have some photos to share.

Grounds of the public school close to us 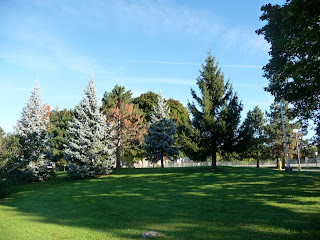 Leaves have changed on this tree 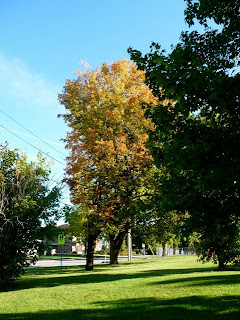 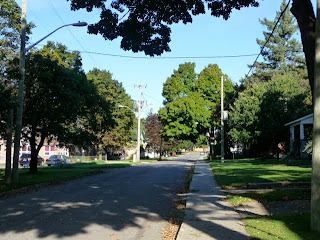 A lone red leaf on the sidewalk 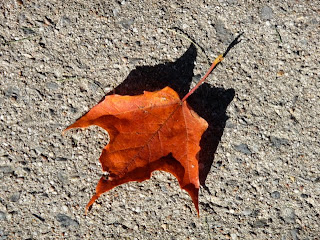 Squirrel running along the street 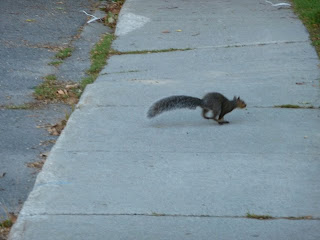 A shorn weeping mulberry (not ours) 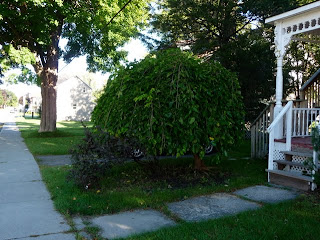 This house is really close to the railroad tracks 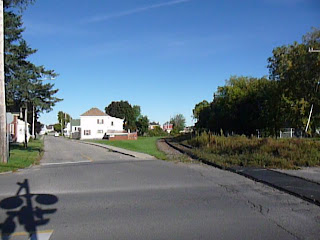 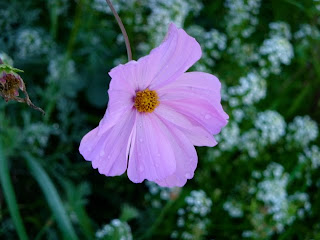 Dragonfly on the sidewalk 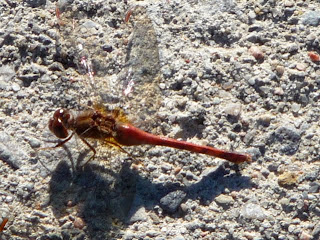 This sidewalk runs throughout our residential area 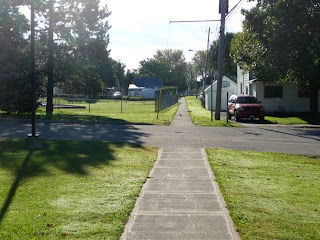 Lots of squirrels preparing for winter 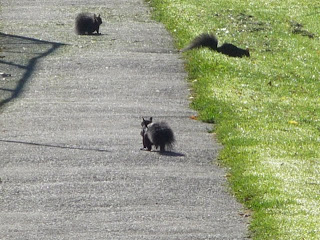 Bluejay on a lawn 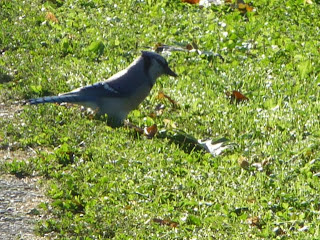 Sidewalk at the front of the houses on our street 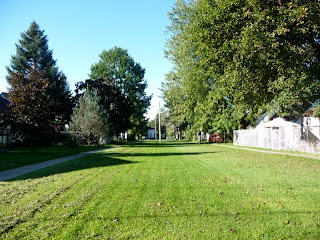 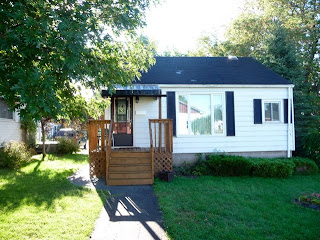 After breakfast I started doing some arranging in the basement. Gordon helped me get my new cabinet in place so I could put my linens in it. I don't think that this basement is going to be in any kind of order anytime soon.

We had an absolutely gorgeous sunshiny early Fall day today with a high of (21C) 69F.

We had a guy come and look at the truck for the second time this afternoon. He really liked it but wanted us to give it away. We had a young guy here Friday who was very interested as well. He is working on the new arena here and left to go home for the weekend so hopefully we'll hear from him soon.

I painted my little garage sale shelf this afternoon. Instead of blue, it's now green. I hope it will look okay in the bathroom. That was why I purchased it.

Gordon spent the day preparing for his colonoscopy to take place tomorrow. YUK!

Up at 6:45 a.m. to get ready to head to Ottawa for Gordon's colonoscopy. We were there lots early but you never know about traffic at that time of day. Suffice it to say it wasn't a good time for Gordon but now it's overwith and all was well. We were home by shortly after noon.

I went out to get some things done while Gordon rested. When I got back it was time for a nap myself.

We had another nice sunny day today. I really prefer this time of year to the hot, humidity of the summer.

Tonight we watched the Queen in 3D. We picked up free 3D glasses at the post office. Apparently they have recently discovered that her coronation was filmed in 3D back in 1953 so that was what we got to watch. It was quite good considering it happened nearly 60 years ago.

After yesterday's deluge of rain this morning was bright and sunny but chilly at 8C (46F). Luckily I had left out a pair of gloves when we moved so away I went on my morning walk. The last two days I have been conserving my energy for wallpaper removal and installation. As I was walking I noticed little black and gray squirrels scurrying around carrying acorns in their mouths. I hope that's not a sign of early winter!

I spent the morning running errands.

This afternoon we got some energy and cleaned and vacuumed out the garage. There was all kinds of cardboard and styrofoam that had to be cut up. We have many, many garbage bags. At 2 bags per week that we're allowed it will take till next year this time to get them all sent off to landfill. I wish there was somewhere that would take back styrofoam! The cardboard will be recycled. We have a garage door opener that Gordon is going to install so we can put the car in the garage this winter. We believe that garages are for cars not junk!

Tonight it looked like there would be a nice sunset so we went out. It was pretty, not as spectacular as some earlier in the year but definitely worth missing Jeopardy!

Sun on the water 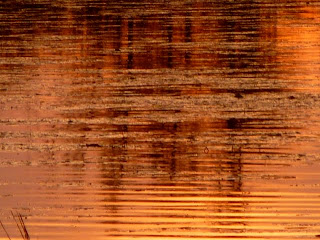 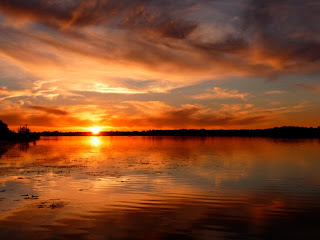 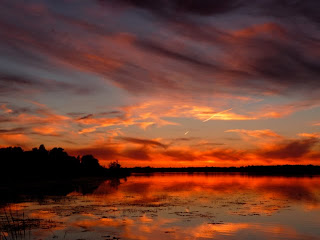 We had some sun this morning but around 2 p.m. I looked at the radar and this is what I saw. 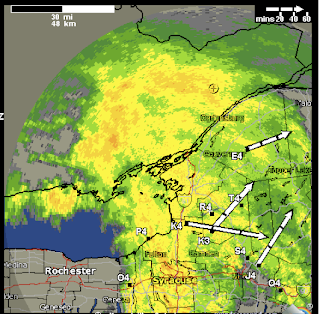 Guess we'll be dealing with this for a while! It was a good day to do indoor stuff.

After breakfast this morning I got busy on my wallpapering job. I'd do a couple of strips, then do something else like make Gordon's favourite Butterscotch Pie (his mother's recipe slightly adapted by his daughter to be gluten free). Today is Gordon's birthday. Happy Birthday to my wonderful husband! This time I used corn starch and it thickened nicely. The last time I made it, it was kind of runny. 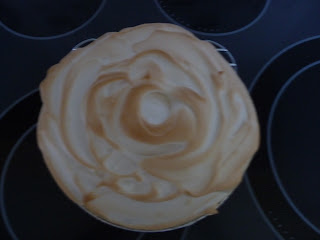 The wallpapering went okay. The walls aren't straight and they're in poor shape but I managed to get it done with only one major boo boo. I'll have to ponder how to fix that. It's in a really noticeable spot too.

Afterwards, of course, I had major indigestion from bending over so much.

Then it was clean up and getting the glue off everything including the bathroom mirror and floor. Now it's rest time, oh, after I get some laundry done.
Posted by A couple of newer paintings 2019 at 2:08 pm 3 comments:

Today was what is called an 'unsettled' day. It rained then the sun would shine, then cloudy & rain & sun again. I managed to get my walk in without getting wet.

We took the truck in to be safetied this afternoon so it will soon be ready for sale! While out we stopped and got some wallpaper so now I have a job to do. I think the wallpaper in the bathroom will come down quite easily as it's lifting in spots. We also stopped at the library and I stocked up on books.

When we got home I started stripping wallpaper. It didn't come off nearly as easily as the bedroom. The top came off fairly well. Then I had to spray the backing and scrape and then scrape the glue off. Now that I've got some of it off I think I'll have to paint before wallpapering. The drywall just isn't in very good shape. I just keep thinking how nice it will look when it's done. That's all that's getting me through it!

It was up and at 'em this morning. I got the rest of the wallpaper backing and glue off, sanded the walls, washed them, washed the ceiling, painted the ceiling (never again!) and put some paint on the walls just to give the paper something to adhere to. Then sanded the walls again and I'm ready to start wallpapering tomorrow. Pray that it sticks! I just hate all the mess that goes with painting.

In the meantime Gordon got the truck finished and ready for sale. It's now in our side yard by the road with a For Sale sign on it!