Bunche Beach and Dinner Out 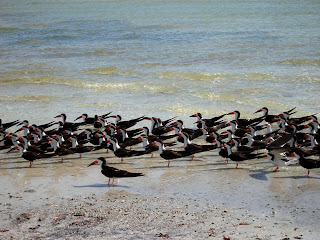 Only part of a flock of black skimmers at Bunche Beach

The bracelet that Betty bought at the craft sale
This morning we lazed around, I sat outside and read and Gordon worked on his photos.

This afternoon we were to be at Betty and Garth's for 3:00 p.m. We sat on their lanai and chatted for a while then drove to Bunche Beach and walked on the beach. While we were there this giant flock of black skimmers flew in. We were able to get really close to them and took some photos. Back at Betty and Garth's, Betty showed me a bracelet that she had purchased at the Craft Sale this morning at Kelly Greens. I was really surprised to find out that it had been made by Linda Payne of rv-dreams.com. Small world!

Betty prepared Omaha steaks and baked potatoes, carrots and salad for dinner with ice cream and fruit cocktail for desert. It was excellent as usual.

Arrangements have been made to meet up with them at a new mall here in Fort Myers tomorrow to check out new cameras for Garth.
Posted by A couple of newer paintings 2019 at 8:44 pm No comments:

Back to the Fleamarket

Gordon dropped me at Walmart this morning and Betty picked me up there and away we went to the Fleamarket again. It was very hot today so glad I wore shorts! There's no air conditioning in the Fleamarket. I bought a sweatshirt (yeah, I know, it's too hot for a sweatshirt but we'll be starting our trek home in a couple of weeks and I have no doubt it will be used) and a sundress - great combination!

We stopped at a place selling puppies and they had a toy apricot poodle. He was so cute! They even offered to ship him to Canada for me but I declined. It's much easier traveling without an animal even though I miss having one sometimes.

The traffic was horrendous on our return as the Minnesota Twins stadium was just letting people out from a game this afternoon. It seemed to take forever!

Gordon was out photographing historical sites and beaches today. He says he took 200 photos so check out his site here. It will take him a day or so to get them uploaded.

Now I'm home and it's too hot to do anything but I guess I'd better start thinking about dinner.

No photos today. I didn't even take my camera with me.
Posted by A couple of newer paintings 2019 at 5:38 pm No comments:

Time to Get Housework Done 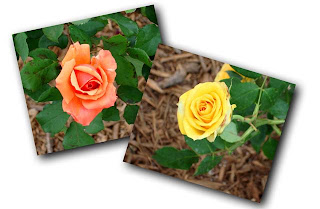 It seemed a little cooler this morning so I decided to get the freezer defrosted and the refrigerator cleaned. Once I started working, it didn't seem so cool anymore. While the freezer was defrosting I vacuumed and washed the floors. By then the freezer was ready to be cleaned up and the excess water disposed of.

Since that nasty little job was done, I headed to Walmart to get some groceries. I haven't been buying any meat since I needed to get the freezer cleaned out as all I have are two small coolers to put the freezer and refrigerator stuff in when defrosting.

After getting back to the RV and unpacking the groceries, I sat outside and read for a while, then took some books that I've read since I've been here up to the lending library at the office and exchanged them for others. While I was out I took photos of these roses in the Memorial Garden here in the park. Apparently they are donated by people whose spouse or friend has passed away - a nice idea.

Today was another beautiful day. We did have some cloud but the temperature reached 86F (30C) with a nice breeze.

This morning we headed east to visit Lake Okeechobee so we drove through La Belle to Clewiston and stopped at the Chamber of Commerce. The lady there wasn't as friendly or helpful as we find at most Visitor Information or Chamber of Commerce Visitor Centres however we did drive to the area that she suggested. There is a walking trail of 110 miles that goes all around the lake. We had no plans to walk it however. The lake is surrounded by a dike that was built by the Corps of Engineers to keep the lake from flooding during hurricanes. Apparently in the 1920's this happened a couple of times killing a lot of people. So, you climb the dike but instead of the lake (at least in the Clewiston area) you see a canal with the lake in the distance. We climbed the dike in a couple of different places but didn't get a good look at the lake itself.

We drove southeast for a ways and stopped for a picnic lunch at John Stretch Park. 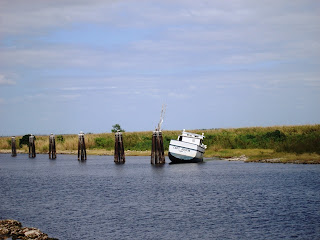 Looks like Capt. Justin ran his boat ashore. Don't know how long it's been there but it makes for a good photo. 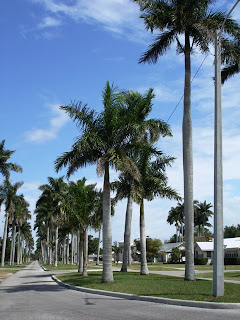 This is Royal Palm Drive in Clewiston. Not an exceptionally high end street housing-wise but very pretty trees. 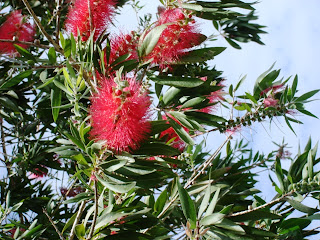 There were lots of these bottle-brush trees in Clewiston. I haven't seen them since we were in San Diego last winter. 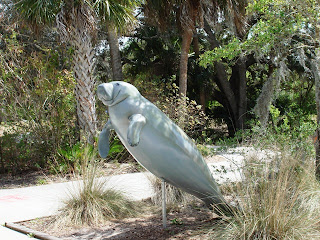 On our way back we stopped at Manatee Park. Unfortunately this is the only manatee we saw. 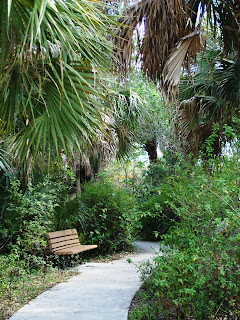 This is a pretty area in the park. Doesn't it look cool and refreshing? 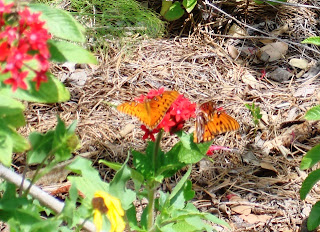 We spent most of our time at the Butterfly Gardens. These two Gulf Fritillary butterflies stopped long enough for me to get a photo of them on the same flower.

Although the Manatee Park is not that far from where we are in the RV Park, it took us an hour to get back because of the traffic. Gordon decided to drive through the city instead of taking the freeway so that probably had something to do with it but we saw some areas of Fort Myers that we wouldn't have seen otherwise.

A Picnic and a Surrey Ride

This morning started out sunny and nice. We had planned a picnic for today at with Betty and Garth. Shortly after noon it clouded over and looked like rain so we took our rain jackets and headed to the park to meet Betty and Garth for 2:00 p.m. There are several shelters available with picnic tables but it looked like they had to be booked as some had “Reserved” on them.

I had wanted to sit on the deck overlooking the water by the concession stand so we headed there. It was VERY windy and we spent most of our picnic holding onto things to keep them from blowing away. It’s too bad as I was really looked forward to a nice leisurely picnic. I had made potato salad and deviled eggs and picked up a roasted chicken from Publix with pineapple for dessert. The food was good though.

They have all sorts of vehicles and boat types for rent so Garth went and rented a four seater surrey that you pedal (there are pedals for each person). We had it for an hour and it was fun but hard to pedal especially on hills. We saw lots of birds and one alligator laying out on a tiny grassy island close to shore. 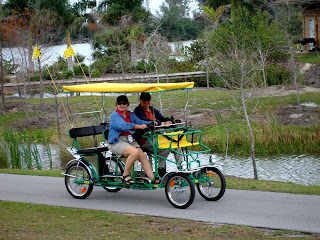 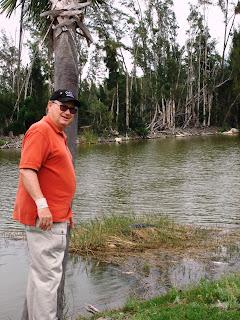 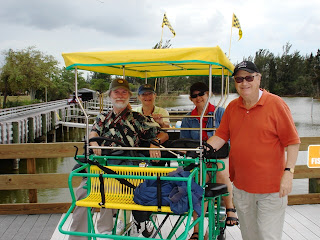 The four of us and the surrey

The rest of the day remained cloudy and windy so much so that when we got back to the RV, Gordon put the awning up.

No walk this morning as I was meeting Betty at Walmart again for our shopping trip to the Edison Mall. Gordon decided he didn't need the truck today so I just left the truck at Walmart.

We didn't go in most of the stores sticking mainly to the anchor stores - Dillards, Macy's and Sears. Betty bought quite a few things but I didn't buy anything - no room for things I don't need! We had lunch at the little restaurant in the mall, then continued on shopping. When we finished there we stopped at Big Lots but didn't buy anything there either. I've been looking for a pillowtop mattress cover and a new duvet but so far haven't seen what I want. Duvets really have some ugly patterns!

Betty dropped me at Walmart at about 4:30 p.m. and I went in to pick up a few items. I've invited Betty and Garth for a picnic tomorrow at Lakes Park so I needed some things for the picnic. Then on my way home I stopped at Publix to pick up a roasted chicken for our picnic. Tonight will be getting the potato salad and deviled eggs together. 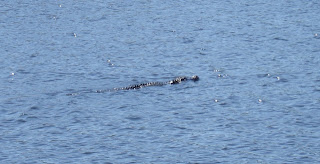 Mr. Alligator swimming in Gator Lake on our way in to the Slough 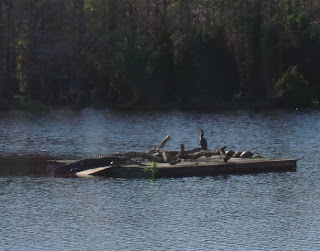 Mr. Alligator sunning himself on the raft on our way out

We had to put the heater on last night. It got down to 48 F (9C). It was bright and sunny this morning but still quite cool even though I slept till 9:00 a.m. I haven’t done that for ages! The rest of the morning and early afternoon were much the same, recovering from last night’s St. Patrick’s Day party.

Late this afternoon, Gordon decided he wanted to go for a Sunday drive so we drove to Six Mile Cypress Slough and did the whole boardwalk trail this time. We saw lots of birds including a pileated woodpecker, a couple of immature ibis and a limpkin. We also saw the great egrets, tri-colour herons and anghingas but to add to it, we also saw a fairly large alligator swimming in on our way into the and he was sunning himself on the raft when we came out. We spent two hours there and had a good time.

Since it was quite late by then we stopped at Taco Bell and picked up Gordon’s dinner and McDonald’s for my Asian Salad and brought them home to eat dinner here.

That’s about it for our day!