Nothing Going On Today!

It was 3C (37F) and party cloudy for my walk this morning but probably wasn’t as cold as yesterday as there wasn’t as much wind.

Gordon had gone back to the again this morning to take some sunrise photos and this time he managed to get some he was happy with.

This morning was spent on the internet until the satellite went down, having showers at the campground shower house. They have heat in there so it’s nice but lots of campgrounds don’t provide heat in the showers. That’s something I hate at this time of year about showering in the RV. It’s too cold!

We had rain this afternoon and we stayed inside and tried to keep warm. 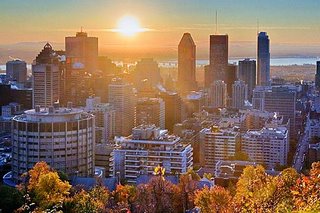 Gordon left really early this morning before rush hour to get into the city to take some sunrise photos. I got up at my usual 8:00 a.m. and it was bright and sunny but only 4C (40F). I decided to forego my walk for a while. It was still only 8C (46F) when I went out for my walk just before noon and it was mostly cloudy by then.

I spent last evening and some of this morning programming my new phone. It’s easier to understand than the last one or maybe it’s just because I got to know how to program the last one and this is similar. It also has a camera which I didn’t have before and probably won’t use much as the girl at the store said you have to email your photos to yourself and I don’t want to start that as it will drive our bill up and it’s enough as it is!

Gordon went out again this afternoon to try and get some more photos of the city skyline and this time was successful although it was cloudy over the city. When he got back, I realized that he was running out of food. Having Celiac disease in isn’t fun. I haven’t been able to find corn wraps at all so he’s almost out. I realized I had a package of gluten free French bread but when I went to make it, I didn’t have any yeast. (When I opened the package there was yeast in the package but it didn’t say on the package). So off we went to the grocery store where I picked up yeast and we got some other staple items that he can eat. It was when we returned and I started making the bread that I found the yeast inside the package of bread flour. So today I baked corn bread and white French bread. That will tide Gordon over till we get back to where we can get him some supplies.

Tonight was TV as usual! 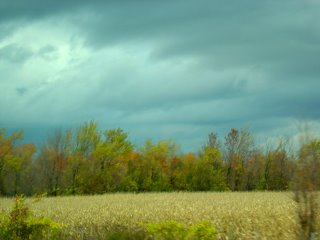 
It rained quite hard during the night but was fairly mild and the rain had stopped when I went for my walk around 8:00 a.m. 12C (53F).

We decided that today was the day that we would go to Plattsburgh to get my cell phone replaced so we headed out around 10:30 a.m. We had a bit of rain on the way. We got to the border – long lineups and of course, we got in the wrong lane so we waited 50 minutes in line to get through. The customs agent was a good ole boy that was very chatty but we had no problems and arrived in around 12:30 p.m.

We were both hungry so went to the mall to see if they had a Taco Bell. That way Gordon can have Taco Bell and while I like it, I’m not doing well with cheese these days and most things there have cheese in them. Indeed there was a Taco Bell so he was able to satisfy that craving and I got a salad at Burger King. There was still cheese in it though.

There was a Verizon kiosk in the Mall right beside the food court so we stopped there but were unable to get the phone we wanted. They had one but it wasn’t on their inventory so they couldn’t sell it??????? She had already started the application as we have to sign up for another two years or else pay full price for the phone. So we took the application with us and went to the local store. I got my new cell phone but still had to pay $107.00. I did get a leather case this time. Hopefully that will cushion its falls. There is a $30.00 mail in rebate that I’ll have to send in. If I could have waited till November 27th, I would have gotten a free phone but my luck isn’t going that way, I guess. Now I have to reprogram it will all my phone numbers.

After that we picked up a few items at the grocery store. Gordon had run out of grits and you can’t buy the instant kind in (at least not that I’ve found). That’s his staple breakfast. After that we headed home as we didn’t want to get stuck in rush hour traffic around . It can be quite beastly. On the way back we stopped in St. Bruno and picked up a few groceries. Not impressed with their grocery store, Provigo – very expensive! Hopefully what I got will tide us over till we’re back in on Monday.

This morning was cloudy with a hazy sun in the sky but mostly obscured by cloud. It started to rain shortly before noon and rained on and off all day.

I packed up the laundry to get done, picked up my phone to take it with me, opened it to turn it on and promptly dropped it and it broke in two so now I don’t have a phone so if anyone needs to call, please use Gordon’s number for now. We’re only about an hour away from , NY so will make the trek down there to get a new phone at the Verizon store in the next couple of days. After I finished the laundry and put it away, I got the vacuuming done so I think that’s enough housework for today.

Other than a nap and TV tonight, that about describes my day.

Since I didn’t take any photos today, I’ve done some computer art work to a photo that I took at last week. If you double click on it, the palette knife treatment shows up better. 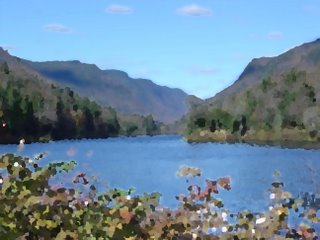 Sorry for the photo error yesterday of our site. The correct one has now been uploaded.

Today it was mostly cloudy and a fair amount of wind for my walk. It was supposed to be mostly cloudy here today with a high of 12C (54F) with a chance of rain overnight.

We got a late start this morning but headed out to a Dodge dealer to see if we could get service done today. We’d already gone over our mileage so didn’t want to wait till our return to next week. We got that done, drove around the south shore a bit, then came home as we were both tired and hungry.

After a nap and some food, we headed into and up to the observation area on . Unfortunately at that point it was too dark for my camera so I used Gordon’s Minolta to take some photos of some little bandits that we hanging around the observation area and looking for food in the garbage cans. Even with the Minolta, I couldn’t take photos of the city lights but I expect Gordon will post some. Below you will see one of the little bandits. Thanks to my husband for doing his magic on the photo. These little buggers are quick. I wanted to get a photo of him with his head sticking out of the garbage can but it was so dark that the camera was taking a long time to flash so we'll have to make do with this one. 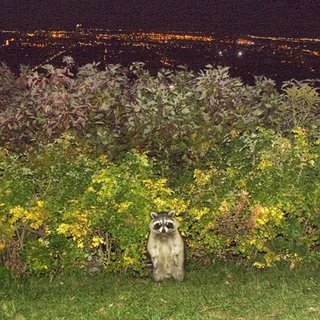 It was a bit of a chore getting there with bumper to bumper traffic on Hwy 20 until we got through the tunnel that goes under the St. Lawrence River, then to find our way to . is a very big city! Then finding our way home in the dark was a bit of a challenge too! It had also started to sprinkle a bit on our way home but only for a short time on the north side of the river.

Our site at Camping Alouette 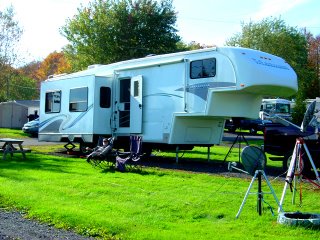 It was sunny and bright but still chilly this morning as we packed up to leave for . We left shortly after 10:30 a.m. and arrived here at Camping Alouette just outside of and south of the St. Lawrence at around 1:15 p.m. Most of the drive was in cloud but as we neared the campground the sun came out and the temperature was about 20C (68F). After we got set up, I sat outside for a while enjoying the weather, then went for a short walk around the campground.

This campground while larger and twice as expensive as the one near is not as nice in some ways. While this one is still rural, the sites are smaller and it’s in an industrial park with an RV dealership and repair shop as part of the facilities. It does have a pool and hot tub which appear to still be open but as the weather is to change in the next day or so, I doubt that we will be taking advantage of it.

I’ve seen one of my pet peeves in Quebec (in the Lévis area anyway) – line ups of cars in front of shopping malls with their four way flashers on while the owner runs in to pick something up from the store. That annoys me to no end. I don’t know why people can’t park in a parking spot and walk a few feet further without taking up one aisle of the driving lane. We’ll see if it happens in the area. While you see it occasionally in , it was almost the norm in Lévis. 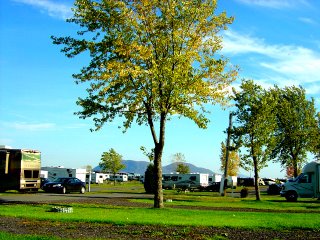 View from my lawnchair
Posted by A couple of newer paintings 2019 at 5:42 pm No comments:

Happy Thanksgiving to all the Canadians out there!

Today was another bright, sunny day and a bit warmer than yesterday but with some wind. After my walk and breakfast I got ready to go into Lévis and do some girlie things like go to the Mall and WalMart and get groceries. I’m photographed out for a day or two, at least until we get to tomorrow.

I’m planning on doing the Thanksgiving thing tonight since we’re moving tomorrow. I wasn’t able to get a turkey breast but I was able to find a turkey leg so Gordon will have chicken while I get my dark meat!

That’s about it for today. Desperate Housewives tonight! 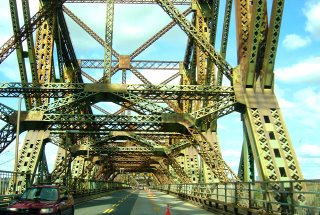