A couple of weeks ago I woke up one morning with a debilitating pain in my shoulder. I put up with it for about four days until it started radiating down my arm so finally headed to the chiropractor who ascertained that it was coming from my neck. I had very little range of motion in my neck that day. He managed to loosen up my neck but despite a couple more trips I still have the pain in my shoulder. It improves a bit here and there and then flares up again. Consequently I haven't been walking since that causes pain or doing much of anything else unless absolutely necessary. Thanks to my husband, the cleaning gets done and I'm able to prepare meals.

So, yesterday being such a beautiful day we decided to go for a drive. We headed west toward  the little village of Maberly taking a small detour to go through the hamlet of Brooke (which isn't much). However we did see a landart exhibit called Fieldwork. 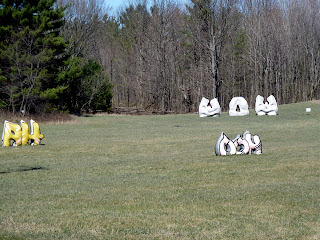 The Ah, Ooh and Wow were all we saw of it but apparently there's more farther on. I wasn't up to walking to see it. It's out in the middle of nowhere but is an interesting idea.

We saw quite a few barns but this one I particularly liked. 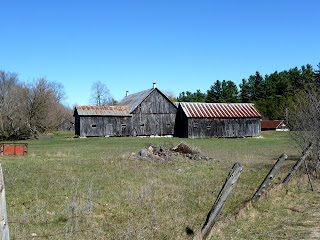 We also took a rather pretty road that looks like you're driving on white sand but actually it's gravel. 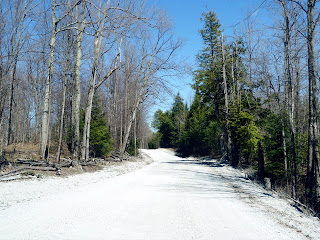 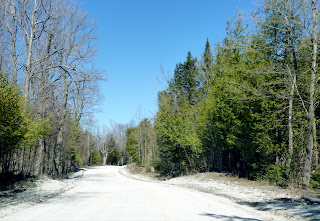 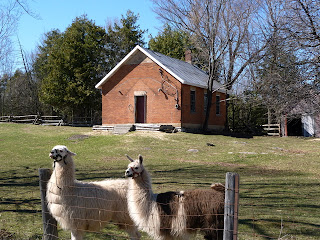 These two llamas came running toward us as soon as we got out of the car. I guess they wanted some company. 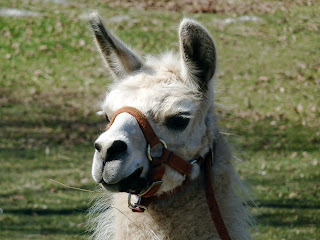 Up close and personal with one of them.

It was a pleasant couple of hours and nice to get out and see some scenery on such a beautiful sunny day.
Posted by A couple of newer paintings 2019 at 9:57 am 2 comments:

Happy Easter Sunday to all our family and friends!


We went on a little drive yesterday so hopefully I'll get another post together soon!
Posted by A couple of newer paintings 2019 at 8:35 am No comments: