Today was another mild, cloudy day with a high of 1C (34F). I went for my walk this morning but didn't really feel like it. It seems I'm having one of my bouts of reflux and I'm tired of it. It's been over a week now. I'm starting taking 2 Nexium/day as of today to see if that helps.

Other than that I spent the day either reading, napping, watching TV or on the computer.

Another terribly unexciting day here in the western suburbs of Ottawa, Ontario.
Posted by A couple of newer paintings 2019 at 5:38 pm 2 comments:

Today was the day the kitchen counter was going in. They were supposed to be here at 9 a.m. Two guys dropped off the counters at about 9:45 a.m. and the installer arrived at about 10:30 a.m. It took till about 2:30 p.m. for it to be installed. Nancy also had the sink and tap replaced. Since the counter is black with silver through it, she got a black double sink and a black tap. The counter doesn't show up well in a photo, at least with my camera.

While the kitchen was being updated, we watched this gray squirrel get onto the bird feeder. This is the first one that's managed it. 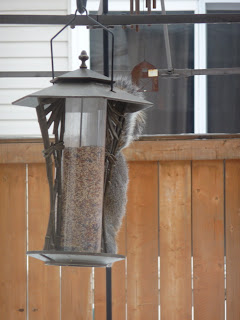 And sitting on the feeder 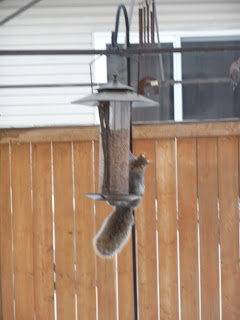 Quite proud of himself 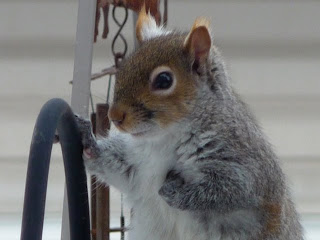 We had one shot of sun today otherwise it was overcast but the temperature was at 2C (36F) all day. That's warmer than it was in Florida at one point this week.

After the guys finished up in the kitchen, Gordon and I took off to the RV. We figured since it was above freezing the lock wouldn't be frozen and we were right. Gordon needed to pick up a cable for our PDA's that we had forgotten in the rush in October. The RV looks fine.

From there we drove back to Almonte to see if the falls had frozen yet. There was more ice than last time we were there but the falls were still running. 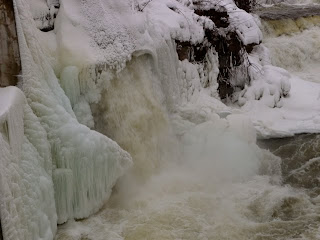 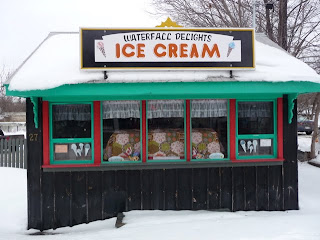 I love this house that overlooks the falls 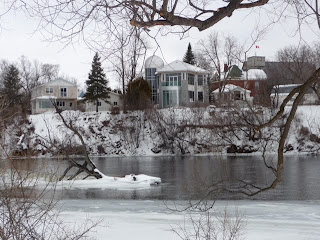 By that time I was hungry. We didn't have lunch since the kitchen was otherwise occupied so since we had gift cards, we stopped and had an early dinner at Kelsey's. It's always nice not to have to cook!
Posted by A couple of newer paintings 2019 at 6:23 pm 3 comments:

It was a fairly mild, cloudy day here. We reached a high of -1C (30F) which is very good for mid January up here. The forecast is calling for freezing 'drizzle' tonight and if the AccuWeather forecast is right for the next 15 days there's no sign of really severely cold weather, but of course, it's January and we all know the weathermen are never right.

I had a walk on the Trans Canada Trail this morning. It was pretty well packed down and I didn't sink into the snow at all which was good since I was wearing my sneakers.

This afternoon I cleaned out the bottom kitchen cabinets in preparation for Nancy's new kitchen counter installation tomorrow morning. It will look really nice when it's done!

I was looking at my immigration lawyer's site and there are some quite interesting stories about what some of his clients have gone/are going through. Click here to get to their site.

Nothing much going on here today so thought I'd publish the......

I saw you smiling There ya Gogh! 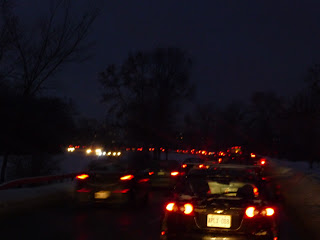 I did go for my walk this morning even if I was late getting out of bed. At least all the commuters and school kids weren't cluttering up the sidewalk! It was warmer today with no wind chill and -8C (18F). It looks like the temperatures here for the next week or so will be fairly mild (for this area and the time of year). The bad thing about mild temperatures is you go through lots and lots of windshield washer fluid!

I went out to pick up a few groceries today and to get some boxes. We need to pack up the bottom cabinets in the kitchen on Thursday night as Nancy is getting the counter replaced on Friday so we thought it would be easier to put the stuff in boxes.

Around 4:00 p.m. Nancy called. She had locked her keys in the truck at work while cleaning the snow off (we had a dusting today) so we got her extra set and took them to her. She works in Hull, Quebec which is just across the Ottawa River from downtown Ottawa, about 27 km. (16 mi). Traffic wasn't bad going there but coming back we were in full rush hour. I think if I had to drive through rush hour every day now I'd slit my wrists! (Photo of tail lights on our way home.)

When we all got home, she insisted on making dinner for us so I'm writing my blog while she slaves away over a hot stove after she's been working all day.
Posted by A couple of newer paintings 2019 at 6:07 pm 1 comment:

Today was sunny and chilly with a wind chill of -18C (0F). My sister, Margie and I had made arrangements to meet for lunch today as she will be returning to work 3 days/week next week.

We met at 11 a.m. at Michaels Craft Store and had a look around, then looked around Ikea for a while before heading to Montana's for lunch. We had a good lunch with time to chat by ourselves and Margie bought lunch. Thanks, Margie!

I had to stop and pick up a few items on the way home, then I headed for home and the couch where I had a brief nap.

Gordon went out for some photos since the sun was shining but he said he got very few photos for the effort he had to put into it. Just walking around with all these winter clothes on is an effort and tiring!
Posted by A couple of newer paintings 2019 at 5:31 pm 6 comments:

It was warmer today. I actually saw a temperature of -1C (30F) when we were out this afternoon. We had a bit of sun as well, something we haven't seen that much of lately.

The housecleaner came on time this morning and after she was gone I went back to bed for a while. I just felt like I hadn't slept enough and even though I didn't sleep a lot, I rested.

This barn had some snow on the roof 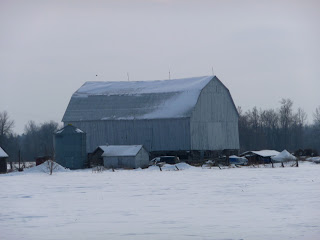 The Jock River is frozen. In fact you can see animal tracks in the snow. 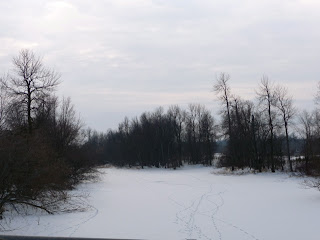 After lunch, Gordon wanted to go out for a photo so I went along but didn't get out of the truck except to pick up my parka which I had taken in to get a new zipper put in on Friday and get some orange juice. Other than that, I was just a passenger.

Other than Nancy making us some peanut butter gluten free cookies (which were yummy), we didn't do anything today so instead of my regular blog here's my....

My first job was working in an Orange Juice factory,
but I got canned...... I just couldn't concentrate.

Then I worked in the woods as a Lumberjack,
but I just couldn't hack it, so they gave me the axe.

After that, I tried to be a Tailor,
but I just wasn't suited for it -mainly because it was a sew-sew job.

Next, I tried working in a Muffler Factory,
but that was too exhausting.

Then, I tried to be a Chef - figured it would add a little spice to my life,
but I just didn't have the thyme.

I attempted to be a Deli Worker,
but any way I sliced it, I couldn't cut the mustard.

My best job was being a Musician,
but eventually I found I wasn't noteworthy.

I studied a long time to become a Doctor,
but I didn't have any patience.

I became a Professional Fisherman,
but discovered that I couldn't live on my net income.

I managed to get a good job working for a Pool Maintenance
Company, but the work was just too draining.

finally got a job as a Historian
- until I realized there was no future in it.

My last job was working at Tim Horton's,
but I had to quit because it was always the same old grind.

Finally, I opted for RETIREMENT,
AND FOUND I'M PERFECT FOR THE JOB!