On Tuesday Gordon finally got my shelves up in the corner between the closet and the window. That space was just wasted so now it has a purpose. I could use a lot more of those "purposes" in the basement. 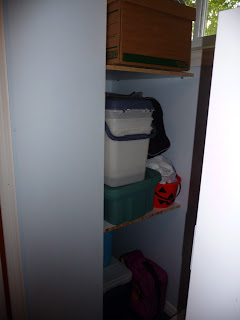 On Wednesday we joined Aunt Joyce's family at the Broadview Nursing Home for her 85th birthday party. A couple of the kids and their spouses were missing but we were joined by another cousin, Carol and her husband, Eddie (on left closest to the camera). Carol had come to mother's funeral but I don't recall much about that day so it was good to see her again even though we didn't get to chat much. 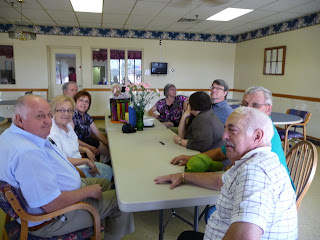 On Thursday August 16th it was six years since Bib passed away. I still miss him. He was my sweetie puppy but we are both glad that we elected not to get another animal. We just don't want the responsibility any more. 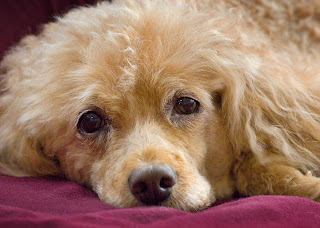 Also on August 16th our granddaughter Iris turned 4 years old! We haven't seen her since she was about 8 months old.

August 17th was my Mom's birthday. If she were alive today she'd be 94! 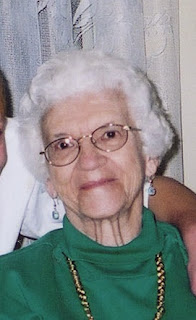 Our tree has now been marked for removal. You can see the big red H on it which stands for Hydro. Since the tree's branches are infringing on Hydro (electric) wires and the tree is leaning into the wires, Hydro will cut it down but they won't take the wood away. Hopefully even though it is soft wood it will be of use to someone. We have no idea when they will come to take it down.

I'm afraid it's been a hot, dry boring summer here in Sensational Smiths Falls! During the day it's too hot to do much of anything and the heat and humidity have left me feeling sick and tired most of the time. We have had some rain over the last few days but not enough. We're still on 20% water conservation.

On August 1st our furry nephew, Jasper came to visit us for a week while his parents were moving our human niece, Danica to Hamilton, Ontario where she will be attending medical school at McMaster University. She and her Mom had gone down earlier in the month and found her an apartment and she had her Dad had gone down for a few days to paint it.


This morning we dropped by our old home base, Tranquil Acres. All sites but three are now seasonal. The three spots are not for transients but for friends and relatives of the seasonals to come to visit.


I opened and closed the gates twice today for people so they wouldn't have to get in and out of their vehicles.


Dave and Shonagh weren't around so we made ourselves at home and walked around. It was nice to be there recalling memories.
Posted by A couple of newer paintings 2019 at 9:21 pm 2 comments: