I had planned to walk this morning but the humidity was already thick when I got up. It had apparently been quite foggy. I did get up somewhat later than usual. I've been so tired lately, don't know if it's the humidity or from my eye surgery or stress, all I know is I'm tired! That doesn't mean that I can sleep though!

I went for a short walk this morning. It was starting to get humid but was till not bad and the sun was shining.

This afternoon we went out to take another of Gordon's photos to Spotlight on the Rideau. While out we stopped at Home Hardware (our home away from home) and picked up what Gordon needs to hang the French door for the office.

A couple of barns 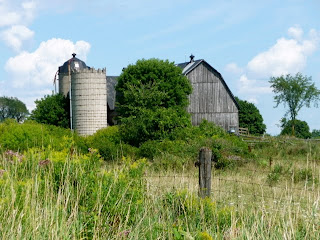 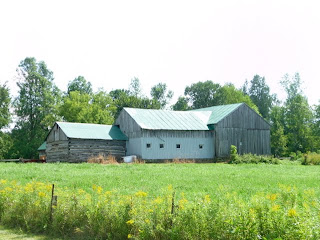 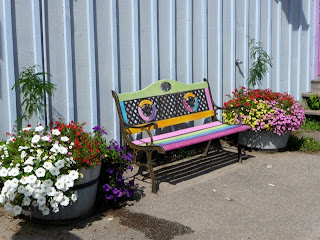 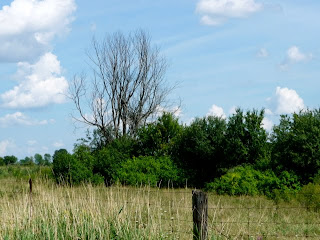 Our freezer was scheduled to arrive between 8 and noon. The driver called around 11 and said they'd be here before noon and they were! They hauled it downstairs for us and were off! We were advised to wait 2 hours to plug it in and 4 hours to put anything in it that wasn't frozen. That's ok, I left it overnight.

Today was handyman day with Gordon being the handyman. We bought a French door a couple of weeks ago and it needed some taken off the top and bottom. Gordon decided to practice some first so the door to the laundry room needed some cut off it so he started with that one. Now it doesn't catch on the carpet anymore.

Next was the closet door in the master bedroom. He took both closet doors off and took a bit off the bottom of each as they were catching on the carpet. That didn't do anything to make them easier to move so he sprayed liberally with WD40. Now they work!

This is cottage weekend at my sister's cottage in Lindsay. We decided not to go this year as I don't want to do anything to screw up my eye surgery and I also don't want to be away from my doctor and hospital should anything happen. I'm not really expecting anything to but you never know! Needless to say, I'm not the most popular person with my family but sometimes ya gotta do what ya gotta do.

We were sitting having dinner when we heard this loud noise. The blower on the furnace appears to have coughed. So no air conditioning till it's fixed. Hopefully our plumber/electrician will be able to come tomorrow. The joys of home ownership!

We went out for a drive just before sunset and drove some of the back roads northwest of here. The sunset wasn't much and we didn't see anything to take photos of but it was a nice drive.

I've been doing well with my morning walks this week. I think Thursday was the only day I didn't go. I feel so much better when I do.

Gordon called the guy to fix the furnace blower but he was out so we had to wait for his call. He dropped by late in the morning and said it looked like it was a pulley that had come loose off the drive shaft of the fan motor so he went away with the pulley to get some parts.

While he was gone Gordon got to work on the French door. He had to take off about 3 inches in height for it to fit in the doorway but we now have a French door on the office! 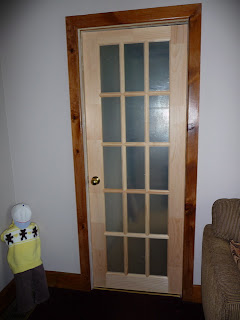 He still needs to put up some moulding and the door needs to be stained. The doorway it self needs to be sanded and painted but since that's my job it won't be done for a couple of months.

Our guy didn't come back to fix the problem so hopefully he'll be back soon. It wasn't that hot today but it gets stuffy in the living room in the late afternoon.

We went out for sunset again tonight. Interesting but not as pretty as some. 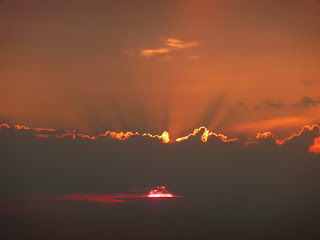 We had cloud, sun and quite a bit of rain today. I didn't do much but nap and make some banana bread as we had lots of bananas that were inedible in their usual form. This time I made it without bean flour using a gluten free all purpose flour so hopefully I can eat it.

I have to say it's a real pain trying to bake a recipe you've never used before having imperfect vision. Very frustrating! Generally I felt 'off' today. It was certainly the type of day for feeling that way as we had a real downpour in the late afternoon and into the evening.

I saw sun when I first got up but then it started raining again. The radar showed pockets of rain but most of it seemed to be south of us.

I had an appointment with the eye surgeon for a check up this morning so we prepared to go to Ottawa. I also wanted to look at a freezer that's on sale at Leon's (where we bought most of our furniture) and I wanted to stop at Bulk Barn and Farm Boy to pick up some groceries as well. I like to shop in Smiths Falls as much as possible but their meat is usually fairly expensive or not great. I sure miss Farm Boy!

The surgeon said my eye is almost healed and everything looks good. I have had some reflection from the lens but he felt that was normal and would decrease with time. My sight went from 20/25 to 20/30 which is in the wrong direction but apparently I still have astigmatism. My sight previously without glasses was 20/1000 so 20/30 is a vast improvement. I can wear a mild corrective lens if I want to. I'll decide that after my other eye is done.

We went to Leon's and got the freezer. It will be delivered on Thursday.

When we got home this afternoon, I called Social Security and I have a telephone appointment later this month. I explained the situation with not being able to enter the U.S. and they were very accommodating. Apparently I need to apply for a social security number which might be a glitch but they thought that the U.S. Embassy in Ottawa might be able to help. Some hope, maybe?

This weekend is my sister and her husband's annual cottage weekend near Lindsay, Ontario for our family. Unfortunately it's not a good time for me with my surgeries, eye drops etc. and with my depth perception being way off so we decided not to go this year. Bummer!

After dinner, we went out for sunset. The sunset fizzled but we had lots of mist! 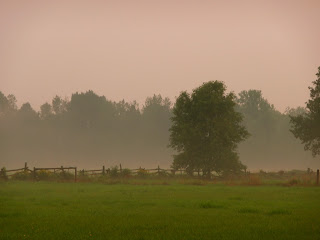 Mist over the road 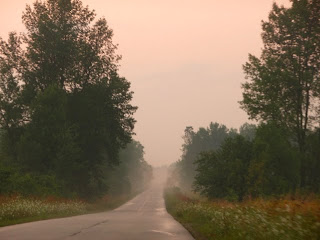 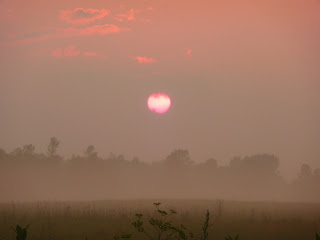