All it Does is Rain! 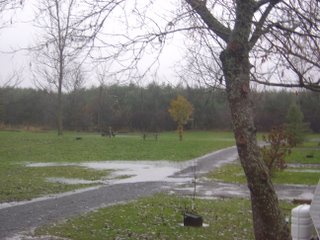 I took this photo out the window this morning. It's worse now!


All it did today was rain, rain, rain and usually quite hard. It started last night before I went to bed and continued all night. The campground is like a sea! We just stayed inside and vegged, no walk. They turned the water off in the campground today and blew out the lines so we’re using our on board fresh water tank. We walked down to the campground showers but they were blowing out the lines so there wasn’t any water. Oh well, later!

Putting in Time Till We Can Get Out of the Cold

It was -5C (23F) this morning when I got up so I decided that I wouldn’t walk as I didn’t want to dig out my winter coat!

Just a note in case I forget. When we’re traveling (if we can ever get out of here/, I probably won’t be posting daily as we probably won’t set up the internet satellite so don’t worry. I’ll post it when we’re situated. Right now it’s looking like we might be here at Mallorytown until Monday.

Late this morning we went into to pick up a few things. We got there in a roundabout way. First we went west on Hwy 401 to see how bad the construction is. If it was something that would tie us up when we were leaving we would take the but they are doing bridge work and only one lane is blocked so traffic isn’t stopped. We drove toward on the and took some photos along the way. Gordon said today that after all the beautiful places we’ve seen, this is a beautiful spot too.

For those that aren’t familiar with the area, the Thousand Islands Parkway is a scenic parkway bordering the St. Lawrence River between Gananoque and in the 1000 Islands Region.

We got home mid afternoon, the sun was still shining but looking like it is about to leave us. We’re scheduled for a weekend of rain – Again! 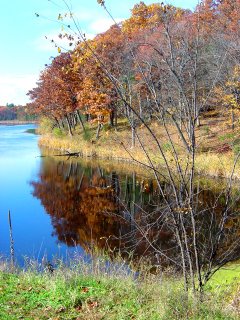 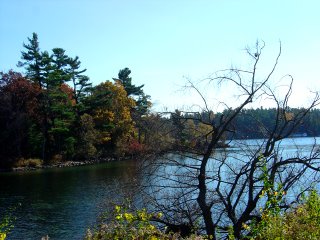 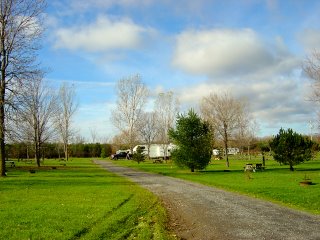 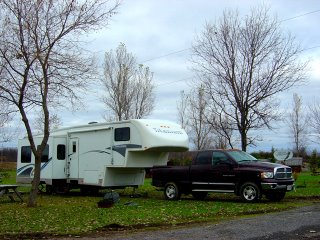 Our site at Mallorytown KOA 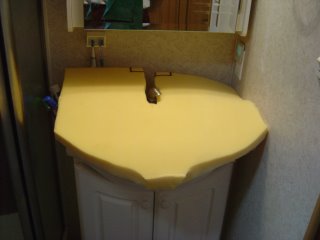 This is something our brother-in-law, John designed to protect our bathroon sink when traveling. It's made of heavy duty foam.

We got a slow start to our move this morning and only left at 11:20 a.m. but arrived safely at Thousand Islands Mallorytown KOA about 1:00 p.m. and were checked in and set up by 3:00 p.m. This was the second campground we stayed at when we began our odyssey. It is an older KOA and needs some work as the roads and sites are narrow but Richard and Susan are very nice and we’re closer to the Bridge to the here so hopefully we’ll be able to get on the road early on Sunday. The days are shorter now but we’ll probably drive as long as we can on Sunday and just stop and rest at a truck stop or something. There is one campground open off I-90 crossing NY and LeRoy. We stayed there on our way back from the south in 2005. That’s an option but I think we’d like to get further than that. Hills Campground at is also open. We stayed there on our return from in the spring this year so that’s another option. We also opted for 50 amp service here so we can run the heater on high. Hopefully that will help with the propane that we’ve been using.

Today was a very gray day. I thought the original forecast was for sun but if it was, it hasn’t found us and it wasn’t sunny anywhere between and here. Around 3:30 p.m. we saw a brief showing of sun but it was very brief.

Nothing else happening here today, just relaxing and trying to stay warm.

Still in Ottawa and Cold! 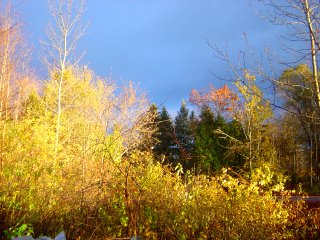 The sun actually came out today. This is a photo I took from the window of the RV late this afternoon.


As it turns out yesterday was our second last day in but who knew?

I got up a bit early this morning as I thought we were leaving to go to Ivy Lea KOA however we’ve decided to stay here for another night for a couple of reasons:

So like most of our plans lately, they changed.

Gordon went out this morning and paid for another day to stay here and was advised that the laundry room and washrooms will be closing tomorrow so I decided to do a last load of laundry. The manager is leaving to go south on Saturday so the campground will be closing.

Our plan B now for tomorrow is to go to the Mallorytown KOA tomorrow. Their laundry room is outside hence my decision to do laundry today. Also I imagine their laundry facilities have been closed down. I called this afternoon and they are open until October 31st.

This afternoon we filled the propane tank. We’re going through a tank about every 3-4 days now.

Our Last Day in Ottawa (for this Fall)

I got up late today. I woke up at 7:50 a.m. and thought I heard rain on the roof so decided to stay in bed where it was cozy. I got up at 8:30 a.m. and realized that it was just misty out so went for my walk then. It was a bit warmer than yesterday but not much.

I spent some time this morning researching RV parks in the Rockport, TX area. It looks like the Raintree RV Park is booked up for December but when we know what dates we will be there, I’ll call them. They are usually fully booked but we may be able to get a week there. There are lots of RV parks in the area so I’m sure we’ll be able to find something.

This evening we dropped over at Margie & John’s to drop off Gordon’s big box of duplicate software and photos as our plan is to leave for Ivy Lea KOA tomorrow (weather permitting). It seems strange that it will be six months before we’re back in again. 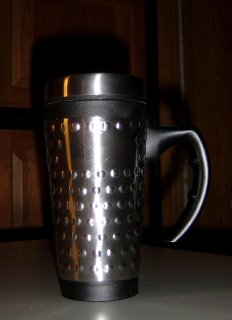 Danica very thoughtfully gave me an Ottawa U travel mug as she saw that my old State Farm one was getting rather ratty looking. Thanks, Danica. That was a very thoughtful gift. See my new mug pictured above.
Posted by A couple of newer paintings 2019 at 8:56 pm No comments: 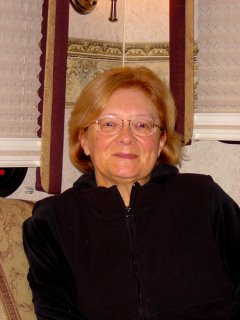 My new cut and colour


Another cold, cloudy morning. It sure makes you want to stay in bed where it’s warm but I did get up and walk.

I decided this morning that I was going out to get my hair coloured and cut. I’ve been doing the colouring myself since we went on the road so decided to give myself a treat. When it’s this cold, you just don’t feel like doing much. Since I don’t have a hairdresser that I go to regularly usually frequenting First Choice salons, I saw a Magic Cuts in Barrhaven and went there. The hairdresser/manager was a nice young Chinese guy from but has been in about 10 years. He did quite a good job. My hair is no longer all one length and is much lighter (as in weightless). It’s good for a change but I’ll have to get used to it. It’s a wash and go style. While I was out I picked up some needed items before we head south and got Gordon some candy at Bulk Barn so he’s okay until we get to the where they have ‘decent’ candy.

Since we need to stay in Ontario for 5 months (which we’ve done) and Canada for six months (which unless we stay until October 29th we haven’t, we’ve decided to leave here and stop at the Ivy Lea KOA until Sunday and then head south from there so we’ll be legal!

After I got back from shopping, I lay down for a while but couldn’t nap so got up and made stew. It’s definitely stew weather!

Apparently while I was gone, my brother-in-law, John came over for a visit. Margie was sick all weekend and is off work today. Both Gordon and I have been fighting something this weekend as well.

A note of sadness: Gordon’s cousin, Judy’s daughter, Katy and her husband and baby were in an accident on the weekend. Her daughter and baby are okay but her husband was killed instantly. They all live in .

It's Just Too Cold For This Lifestyle! 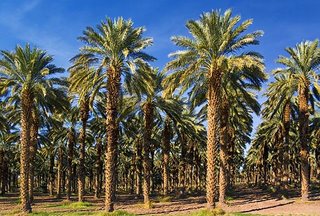 Today's photo was taken by Gordon in the Sonoran Desert this past winter when it was sunny and warm. I miss palm trees!

TOO COLD! TOO COLD! TOO COLD! It was -1C (30F) at 8 a.m. I’ve actually worn my gloves the past couple of nights while eating dinner. These rigs are well-insulated but not for this kind of weather. Being full timers, unfortunately with having to spend five months in and six months in , we have to spend some of April and most of October under these conditions. I bundled up for my walk but it wasn’t really very pleasant although it hasn’t started raining yet. It’s supposed to rain here for the next two days so I don’t think we’ll warm up inside too well as high temperatures are supposed to be 6C (43F) and 5C (41F).

We had some wet snow this afternoon but mostly it rained. We occupied ourselves watching a couple of Harrison Ford movies and napping while wrapped up in blankets.