Even though it was cold and cloudy and I had no energy, I forced myself to go out for my walk and had a good time.

I had gotten a flyer yesterday that said that The Brick had sofas on 50% off so we headed over there to look. As usual, I wasn't able to find anything the right size there. We also stopped at Lazy Boy and Mobilia with no luck.

The main reason for going to that area however was to stop by my sister's and pick up the stuff that I had ordered with my Visa points.

I had ordered a Kitchen Aid stand mixer. I've never owned one and thought I'd like to have one so here it is. Boy is it heavy! 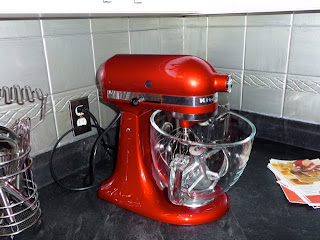 I also ordered the 11 piece set of Jamie Oliver cookware. It has the copper ring around the bottom. I'm going to enjoy using it! Here's the set that I took from the Visa Rewards site.

I also got a 32G Ipod Touch. I had Gordon really faked out as I had gotten it for him but didn't let him know that until we got home. So he has a new toy to play with.

My sister also gave me back my Lone Star king sized quilt that my mother had made for me for a Christmas gift one year. I'll take a photo of it and post it another time.

When we left my sister's house we went to Sofa World as I had seen a couch that I liked there a few weeks ago. This time we got a much better sales lady. She found us a couch we both liked that is only 75 inches long so it will fit easily on the wall that we want to put it on. We picked out the sofa fabric and the pillow fabric and it will be ready in 8 to 10 weeks. 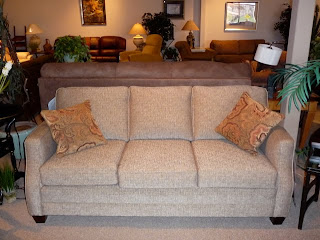 And this is the upholstery material 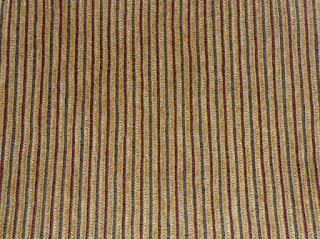 And the pillow we chose as it will go well with the burgundy carpet that's in the house already. 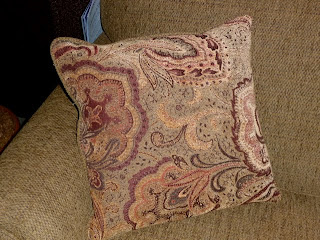 I'd say that constitutes a really productive day!

Things are pretty quiet around here. I've been doing some packing for Nancy, checking out used furniture, looking around at furniture and accessories.

Today Gordon had a dental appointment so I checked out Pier 1 and Bouclair. Bouclair used to be mostly a fabric store but now it's more of an accessory store - pillows, place mats, small furniture etc.

On the weekend I ordered a 32G ipod for me as well as a Kitchen Aid stand mixer and a new set of pots and pans. I thought it would take 4-6 weeks to arrive but I got an email from my sister and it came today! We'll be making a trip over there soon to pick that up. Gordon is interested in playing with 'my' ipod LOL. I told him when I get enough points again, I'll order him one too.

We had quite a thunderstorm last night and some rain but we did have a few sunny periods today. It's supposed to get colder for a few days but then warming up again by mid next week although we're not going to be seeing the temperatures we saw on the weekend for the foreseeable future.
Posted by A couple of newer paintings 2019 at 9:27 pm 2 comments:

Not much has happened since Friday except eating!

Saturday and Sunday I didn't go anywhere. I just wasn't feeling up to par. Sunday night we had another turkey dinner here at the house. The good thing about that is that I got all the dark meat to myself! LOL

Last night Nancy and I made up some boxes that a neighbour delivered to us over the past couple of weeks and packed up some of her office.