I went for a couple of walks today, dressed appropriately for the cold. I even had my gloves on! Our high today was 12C (53F). It only got to 20C (68F) inside the rig but we didn't have the furnace on, only the electric heater.

I spent my day on Facebook.com, surfing, trying to get the answer to this month's Conde Nast Where Are You contest that my sister and I do every month, reading and trying to keep warm! I want to be in Arizona-NOW!!

Here are some Fall photos I took today: 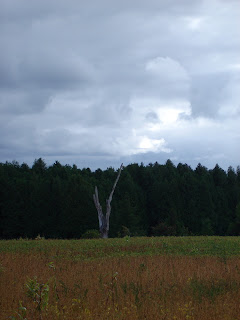 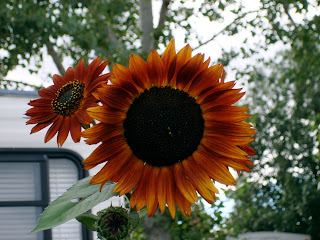 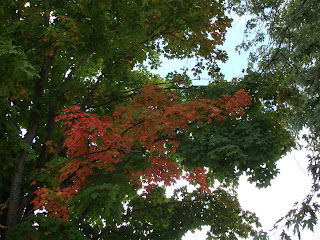 I Love Days Like This Minus the Weather that Came in This Afternoon!

Today was just a beautiful bright sunny day. The temperature reached 27C (81F). I went for my walk this morning and managed a brief run again then returned to the RV. After breakfast I sat outside in the sun and read for a while.

After lunch I went into Lindsay to pick up a few groceries, then drove around a bit, down a couple of side roads. I didn't see much worth photographing though.

I sat outside again when I got back and started another book as I finished one this morning. It's been pretty windy all day and this afternoon was no exception so I came back in and had a nice shower. We've had low water pressure for most of the week and I knew they were working on the sewer in the campground so I thought it had something to do with that but when I was out I happened to notice that our water intake was leaking. Now that Gordon has that fixed, we have great water pressure again so I had a nice shower. Just after 4:00 p.m. the sun went away and the clouds started coming in . We're supposed to get rain and thunderstorms tonight bringing in a cold front so tomorrow's high is only supposed to get to 14C (57F). Quite a change in one day!
Posted by A couple of newer paintings 2019 at 4:31 pm No comments: 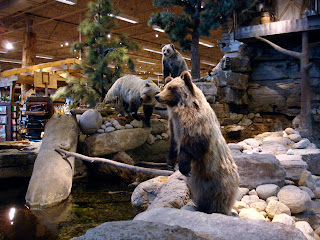 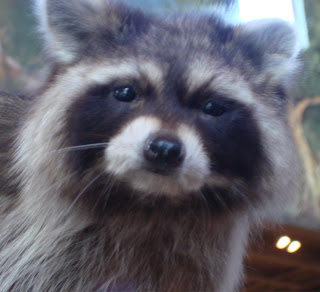 This morning was chilly! Betty picked me up at 9:30 a.m and we drove to Vaughan Mills Outlet Mall in northern Toronto arriving around 11:15 a.m. Betty's friend, Bonnie met us at the mall. I've known Bonnie for years and we even traveled together when I was single. 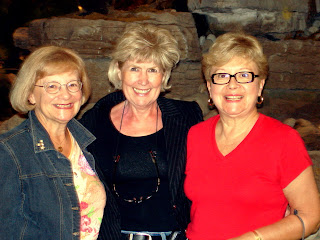 We had lunch at Johnny Rockets then walked the whole shopping mall! Bonnie and I felt every inch of it! Betty is like the energizer bunny she just keeps going and going and going. Anyway we had a nice day, I didn't buy anything as there's nothing I need but Betty and Bonnie couldn't find anything they wanted either so Betty wound up buying a CD to play in the car on our return. Betty and I did have ice cream and Betty and Bonnie had a coffee and that was the extent of our day.

A Day of Rest

It rained quite hard overnight but this morning the sun was shining brightly and the only clouds were very low on the horizon. I decided to go for a walk as it was so nice out.

The rest of the day was spent reading inside. It wasn't warm enough to sit out. I think our high for today was 18C (64F) and it was quite windy. I did have another walk this afternoon and took a few photos around the park. 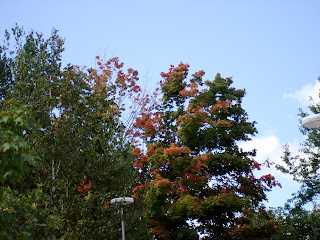 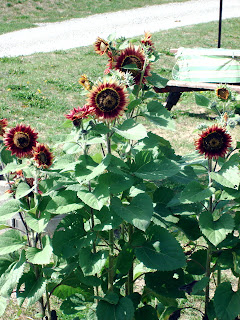 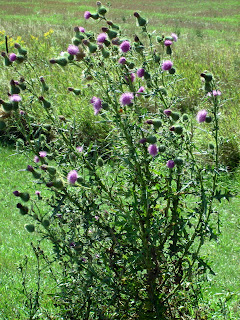 Traveling Around the Small Towns of the Kawarthas (Ontario)

It rained quite hard early this morning and I thought that our day of traveling around the small towns of the Kawarthas was going to be cancelled however the sun came out later this morning and although it was cloudy when Betty picked me up around 10:30 a.m. we had a mixture of sun, cloud and rain throughout the day but we still had a great time!


The towns we visited were Oakwood, Woodville, Lorneville, Argyle, Bolsover, Gamebridge, Kirkfield, Fenelon Falls, Coboconk, Bobcaygeon, Rosedale, Dunsford and Lindsay. There's not much in most of these little towns however they are interesting to see and I hadn't been to some of them before. Gordon and I had been to Kirkfield to see the lift lock but hadn't gone into the town so that's were Betty and I had lunch today. I had breakfast instead and it was a very good breakfast while Betty had fish and chips. 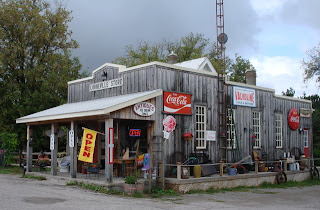 Our first stop was at this little store in Lorneville. He had everything from antiques to jams, cheese and preserves. 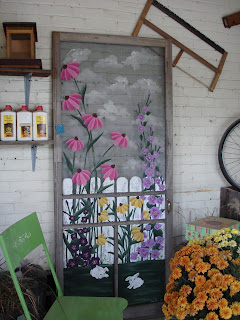 This was a crafty type place but also a restaurant and bakery. The painting on this door is done on screen. Very pretty! 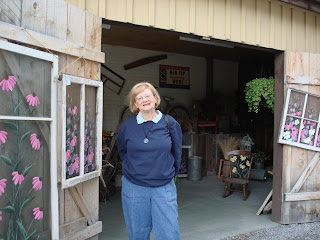 Here I am outside the store mentioned above. It's called The Argyle Store and it first opened for business in December 1880, now one of the last general stores still in operation in Ontario. 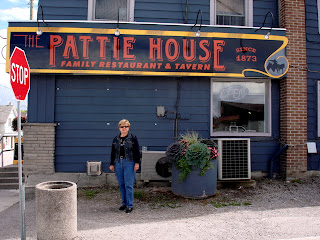 Here's Betty standing outside the Pattie House which is a legend in Coboconk. I remember we stopped there in the boat some years ago and had a drink there. It wasn't what you'd call high society!

We also stopped at a place in Dunsford locally called the Dunsford Walmart. It's a barn stocked with all sorts of things from cooking oil to picture frames. Not neatly stacked and resembles a flea market. Betty said she checked some expiry dates on some of the food and one of the things she saw had expired in 2006. So if you're going to buy anything there, you want to check expiry dates for sure. We didn't buy anything but it was interesting to see!

After that, we stopped in Lindsay to pick up a few groceries and I arrived home shortly after 5:00 p.m.

Gordon took the truck in for service to keep the warranty up to date. I think it's the first time in two weeks that he's been out in the truck except to go to the hospital last weekend. So it looks like he's feeling better. Let's hope it continues!
Posted by A couple of newer paintings 2019 at 5:38 pm No comments:

Today I stayed home and got the laundry done. While we were changing the bed we put the electric blanket back on. It's getting to be that time of year!

On the weekend I had bought vegetables to make a stew so I did that today. Again, Fall is coming, time for stew! With the stew, I decided to make some cornbread as my husband really likes it and it's something he can eat. I found a mix in the U.S. that doesn't have any flour in it. Sure hope I can find some more when we get there! It's quite hard to find.

Other than that, not much happened today. I did go for a walk this morning and managed to run a short distance. It's something I've got to get back into at least until the next bout of shortness of breath! Hopefully that will be a long time from now.

I'll leave you with what is supposed to be a true story:

On July 20, 1969, as commander of the Apollo 11 lunar module, Neil Armstrong was the first person to set foot on the moon. His first words after stepping on the moon "That's one small step for man, one giant leap for mankind" were televised to earth and heard by millions.

But just before he reentered the lander, he made the enigmatic remark "Good luck, Mr. Gorsky".

Many people at NASA thought it was a casual remark concerning some rival Soviet Cosmonaut. However upon checking, there was no Gorsky in either the Russian or American space programs.

Over the years many people questioned Armstrong as to what the "Good luck, Mr. Gorsky" statement meant, but Armstrong always just smiled.

On July 5, 1995, in Tampa Bay, Florida while answering questions following a speech, a reporter brought up the 26 year old question to Armstrong. This time he finally responded. Mr. Gorsky had died so Neil Armstrong felt he could answer his question.

In 1938 when he was a kid in a small midwest town, he was playing baseball with a friend in the backyard. His friend hit the ball, which landed in his neighbor's yard by the bedroom windows. His neighbors were Mr. and Mrs. Gorsky. As he leaned down to pick up the ball, young Armstrong heard Mrs. Gorsky shouting at Mr. Gorsky. "Sex! You want sex?! You'll get sex when the kid next door walks on the moon!"

When I got up this morning I had 7 e-cards from my sister in Ottawa wishing me a Happy Birthday. She said that she didn't get a confirmation so thought they hadn't been sent. 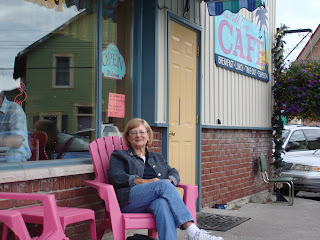 My sister here in Lindsay had planned a day out for the two of us for my birthday. My husband is still not feeling well and her husband was in Toronto so I went to meet her at the cottage and we left from there to go to the little tourist town of Bobcaygeon for a late breakfast. We went to the Full Cup Cafe which is a cute 50's little place with all the chrome tables and chairs with ripped and worn plastic seats and backs. I had strawberry pancakes and they were very good! The photo to the left is me after breakfast sitting outside the cafe.

After that we went to Settler's Village as they were having a quilt display there today. Our mother and grandmother were quilters so we knew a lot of the patterns shown. People are making up their own patterns these days however so there were a lot that we didn't know as well. It was a very well done display and in a lovely setting as well. Below is a photo of Betty with one of the quilts. 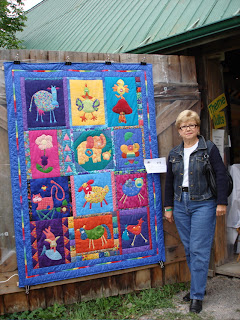 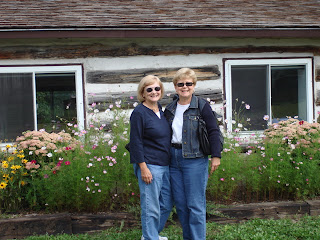 Here are the two sisters outside of Settler's Village.

After we finished looking at quilts we went back into Bobcaygeon and looked through the flea market type stores but didn't buy anything. Some nice stuff, lots of junk! 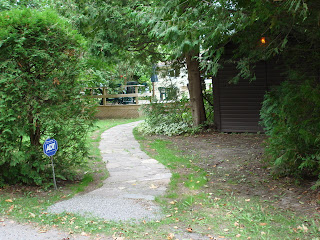 This is a photo of Betty & Garth's new pathway to the cottage that they just had put in. Looks really nice!
Posted by A couple of newer paintings 2019 at 5:22 pm No comments: