Today was sunny but much cooler with a high of 21C (70F) and a breeze. Although the surgeon said I could go for my walks, since my depth perception is way off kilter I've decided to hold off for a while. I don't want to fall again at this point. I'm also not going to drive until my left eye is done. He didn't mention driving so I could probably do it but I'd rather feel that I could do it safely. LOL

Gordon drove me to pick up a few groceries this morning and came along to carry them for me. It's so difficult not to be able to do the things you normally do without thinking. Even typing. With my reading glasses, I have the left one covered and I find myself using the wrong fingers on the wrong letters way too often but I'm too stubborn and addicted to my computer to give it up!

When in the store this morning, I had to keep getting my reading glasses out of my pocket to look at ingredients and that has definitely been the deciding factor in choosing to do my left eye for close up vision.

I was able to make another load of bread. I know the recipe off by heart at this point so it wasn't too difficult. I just had to get Gordon to lift the breadmaker out of the cupboard for me.

Our neighbour sold her house. It wasn't on the market long at all. I told her it would sell quickly. It's a very cute little house. Apparently a young girl has purchased it.

We had another beautiful sunset. 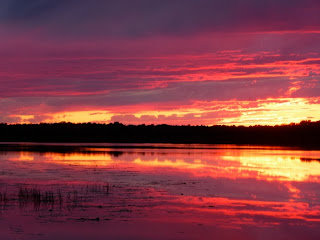 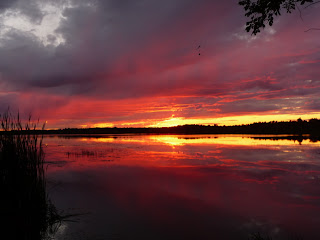 I woke up to a beautiful sunny day again, no humidity. I've been sleeping like a log the last few nights.

Late this morning we checked out a few garage sales and Gordon found a circular saw. I didn't buy anything. We decided to have lunch and go for a drive after. We headed for Brockville, Ontario. Down at the water in Brockville we can pick up the Verizon network so we were going to update our roaming. However, Brockville was a zoo! There was definitely something going on so we headed west along the 1000 Islands Parkway and found a spot there where we could update the phones.

Driving along the 1000 Islands Parkway 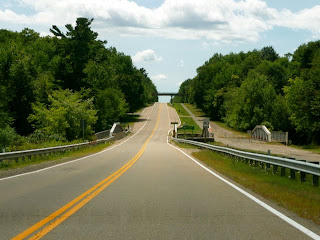 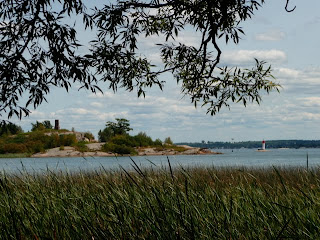 We stopped at the little tourist town of Rockport, Ontario. Again, people all over the place. The cruises to Boldt Island are still very popular and one cruise leaves from Rockport. We parked and walked around a bit and took some photos. 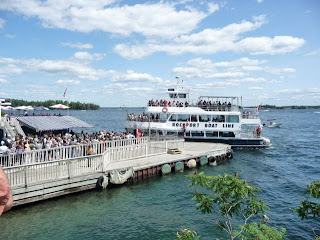 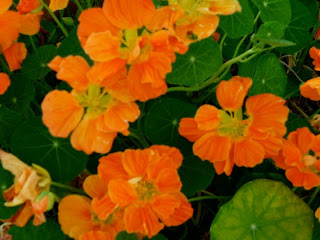 I liked the shape of this restaurant building 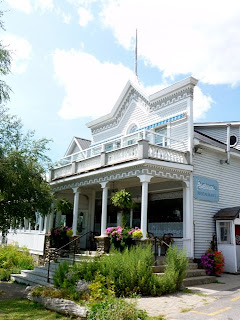 Not your average phone booth 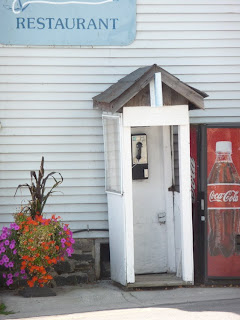 Church taken from the pier in Rockport 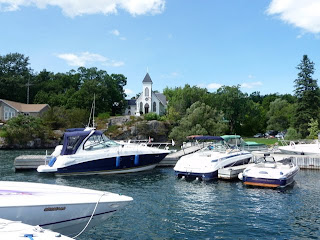 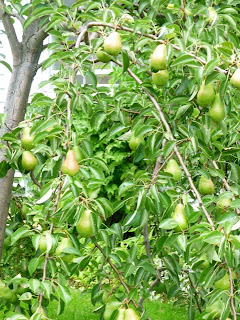 From there we continued west to Gananoque. This is another nice little town but it was also busy. We parked and walked around downtown. I was hungry so we stopped at Tilly's. Gordon had some ice cream and I had an omelet.

Taken at Tilly's in Gananoque - my new sunglasses 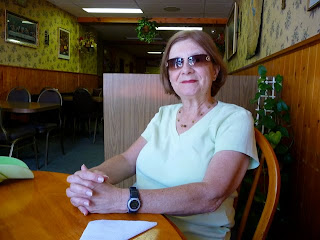 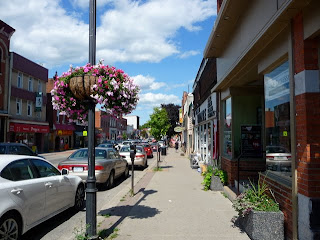 From there we started north through the country and stopped to take some church photos in the little town of Elgin.

The surgery went well. The surgeon did, however, say that my eyes were the most sensitive of all that he operated on on Wednesday. Amazingly I wasn't nervous but didn't sleep well the night before.

Once the operation was over, I just wanted to get home but instead we decided to stay at a motel in case of problems. As I said, I didn't know what to expect. Over the evening my sight got progressively better once the dilation of the pupil was gone. The only problem is the eyes don't work together now and my depth perception is non existent so I missed a step going into the motel office and fell. Luckily nothing was damaged except my elbow.

We had a nice dinner out at Zolas so Gordon got his gluten free pizza. I had a nice salad with a chicken breast.

After very little sleep last night we were up early and went for breakfast before my appointment at the surgeon's. He examined my eye, found no redness or swelling and was very pleased with 20/25 eye sight. He has hopes that it will improve. He also talked me in to doing the other eye for close up instead of doing both for distance. He knows that after over 50 years of wearing glasses I'd like to not wear them anymore so I think I'm going to go with his recommendation. I have another appointment with him on Monday.

He told me for reading and computer work now to go to the dollar store and buy either 2.0 or 2.5 lenses. I bought 2.5 and they will do for now. When I'm not reading I'm pretty much not wearing any glasses at all so I bought a pair of cute sunglasses. Other than the two stints I had with contact lenses, I've never worn real sunglasses, always either prescription or clip ons.

The last two nights of not sleeping well caught up with me this afternoon and I slept all afternoon.
Posted by A couple of newer paintings 2019 at 5:54 pm 2 comments:

Today was our Civic Holiday in Ontario but I had work to get done. Work like changing the bed, vacuuming, thankless stuff! I'm trying to get stuff done before my surgery on Wednesday. Gordon will be taking over most of the duties that require lifting and bending for a while.

I did get my walk in this morning, the sun was shining but it turned cloudy and we had some rain late this afternoon.

I talked to both sisters on the phone wishing me well for my upcoming surgery.

Other than doing some reading and going to see a used freezer which we didn't buy, that was our day!

I woke up to rain and high humidity. It was only 21C (70F) but the humidity was 99% according to the Weather Underground site. Needless to say, I didn't stray outside this morning!

Today was another day spent getting things organized, doing laundry, more cleaning and trying to make things as easy as possible. I'm not supposed to 'look down' for a while after my cataract surgery. That's going to be a toughie. You do things like that automatically. So, does that mean I have to give up my laptop for a while?

I went on a Bejewelled marathon today while I was waiting for laundry to wash and dry. I even managed to get a decent score for a change! It might be awhile before I can play again. Too bad the scores renew tonight!

Other than going out with Gordon while he got a haircut and driving around town a bit, we stayed home today.

Wish me luck tomorrow! I'm a weenie when it comes to hospitals.
Posted by A couple of newer paintings 2019 at 9:37 pm 1 comment: