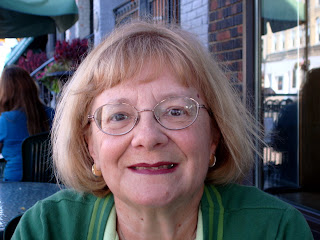 So, here's the photo as requested on the RV-Dreams chat room last night.

Today I met Betty in Lindsay and we went to see The Nanny Diaries. It was a good movie but didn't follow the book. Then we had coffee, picked up a few groceries and back home again!

I borrowed this from a fellow RVers blog.

The Story of the Mexican Fisherman

An American investment banker was at the pier of a small coastal Mexican village when a small boat with just one fisherman docked. Inside the small boat were several large yellowfin tuna. The American complimented the Mexican on the quality of his fish and asked how long it took to catch them.

The Mexican replied, "only a little while."

The American then asked why didn't he stay out longer and catch more fish?

The Mexican said he had enough to support his family's immediate needs.

The American then asked, "but what do you do with the rest of your time?"

The Mexican fisherman said, "I sleep late, fish a little, play with my children, take siestas with my wife, Maria, stroll into the village each evening where I sip wine, and play guitar with my amigos. I have a full and busy life."

The American scoffed, "I am a Harvard MBA and could help you. You should spend more time fishing and with the proceeds, buy a bigger boat. With the proceeds from the bigger boat, you could buy several boats, eventually you would have a fleet of fishing boats. Instead of selling your catch to a middleman you would sell directly to the processor, eventually opening your own cannery. You would control the product, processing, and distribution. You would need to leave this small coastal fishing village and move to Mexico City, then LA and eventually New York City, where you will run your expanding enterprise."

The Mexican fisherman asked, "But, how long will this all take?"

"But what then?" Asked the Mexican.

The American laughed and said, "That's the best part. When the time is right you would announce an IPO and sell your company stock to the public and become very rich, you would make millions!"

The American said, "Then you would retire. Move to a small coastal fishing village where you would sleep late, fish a little, play with your kids, take siestas with your wife, stroll to the village in the evenings where you could sip wine and play your guitar with your amigos."


The bumper snicker came from this weeks RV Travel:

Today was a non event. I sat outside and read. It was really warm today again 33C (91F) and very humid but with a pretty strong wind. Betty had wanted me to go to the cottage this afternoon but I woke up groggy and felt like staying home so I called her to let her know.

This afternoon I proceeded to color my hair. I've been putting it off for the last few days as I haven't felt up to doing it. It was either do it myself or go into town and have someone else do it. Which was more trouble? I decided to do it myself so it looks much better now.

After that, I drove into town anyway to pick up some items. It turned cloudy and windier on my way home and looked like we might have a storm. When I got home, Gordon had put the awning up because of the wind.

I unpacked the groceries and other things I purchased and sat down and read Froggi Donna's whole blog. She's a really good writer! Here's the link to her blog - http://lilypad.froggilady.com

That's it for today, nothing to photograph again!
Posted by A couple of newer paintings 2019 at 4:47 pm No comments:

A Birthday and a Shopping Day!

Happy Birthday Michelle! My stepdaughter is thirty something today! Her Dad was just on the phone with her when I got home so I got to talk to her for a while. She has recently been diagnosed with celiac disease (just like her father) and she's been having a rough time but she thinks she's feeling better now.

This morning my sister picked me up at 10:30 a.m. and we went in to Oshawa to go shopping. Our first stop was the Oshawa Centre, a fairly large mall where we spent most of our time and had a nice Taco Salad at Casey's. Then we went to WalMart to get a few things also stopping at Bulk Barn. I arrived home at about 5:30 p.m. and we decided to have soup for dinner. Suited me!

Here's a photo of Betty when she dropped me off tonight with her little Bumblebee mini Cooper! 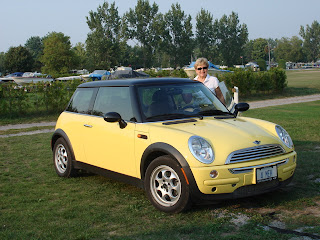 Just Another Day at the Park

It rained overnight and into this morning, not heavy, just a nice light rain. The temperature hardly reached 21C (70F) today. I only went out today to walk the trash down to the trash bin. Here's a photo I took down by the river. 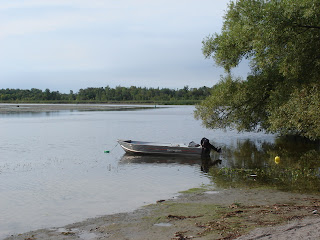 Gordon seems to be feeling better today although he did sleep quite a bit this afternoon.

This morning a brand new park model was delivered and set up two sites over and behind us. It's a really long model and takes up the whole site in length. It's a really nice one with lots of windows in the living area. See it below: 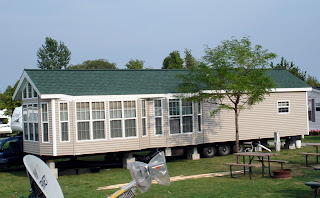 Other than that and finishing my latest book which was loosely based on the Steven Truscott story. The book was called The Way the Crow Flies by a Toronto writer, Ann-Marie MacDonald. I had read the original book The Steven Truscott Story some years ago and remember when this happened. I can recall even as a child wondering how on earth this 14 year old boy could be convicted solely on circumstantial evidence. He was tried in an adult court and sentenced to hang for the rape and murder of a 12 year old friend, Lynne Harper. Amazingly enough, just last week he was finally acquitted of the crime some 48 years later. He only served 10 years in prison and then was paroled and given a new name however it took all this time for him to be acquitted.
Posted by A couple of newer paintings 2019 at 5:45 pm No comments:

Today wasn't a very nice day. We only reached a high of 21C (70F) and it was mostly cloudy all day. I did manage a walk around half of the park this morning.

My husband is still not well but doesn't have a fever anymore and his throat isn't as sore as it was so hopefully he's on the mend. Sure hope so! We're supposed to leave Lindsay to head west on September 20th!
Posted by A couple of newer paintings 2019 at 7:01 pm 1 comment:

Yeah! All of our camping neighbours are gone so it's quiet again! I could sit outside today without all the kid's yelling from the last couple of days. Actually the kids were quite well behaved, we're just not used to so much action going on.

I managed to get the freezer defrosted today but that about covers it!
Posted by A couple of newer paintings 2019 at 4:41 pm No comments:

Today was a beautiful sunny day with a light breeze, just perfect for a long weekend! Other than that the day was pretty much a non event. Sitting outside reading and taking a long nap made up my day until later this afternoon when my husband said he thought he had a fever. We took his temperature and he did have a mild fever so since he's not been feeling well and still has a sore throat after five days, he decided he needed to go to Emergency.

Two and a half hours and a prescription for antibiotics later we headed for the pharmacy and then home! The doctor thinks it's a mild case of bronchitis and gave him the antibiotics just to be on the safe side.

No photos today. Nothing much to take photos of other than what I've already photographed!
Posted by A couple of newer paintings 2019 at 8:49 pm No comments: