We slept with the windows open again last night. Today was warm and windy. It was already 69 (21C) when I got up about 7:45 a.m. and we reached a high of 75F (24C). We didn't have much sun but the outside temperature was nice.

After my usual morning rituals, I went outside to sit and read. I usually turn my back to the wind. I was sitting reading when all of a sudden a see a yellow ball of fur beside me, then his paws were on my lap and then the whole cat was on my lap. He stayed there purring away for about an hour when I told him it was time to move.

I got the vacuuming done this morning and this afternoon I did three loads of laundry. I finished my book while I was waiting for the laundry.

Around 5:00 p.m. it looked like we had some weather coming in. The wind changed from the south to the north very quickly. Looks like no windows open tonight! 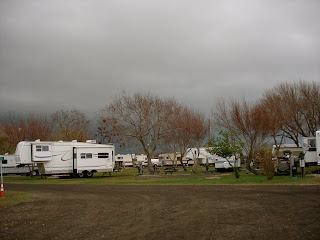 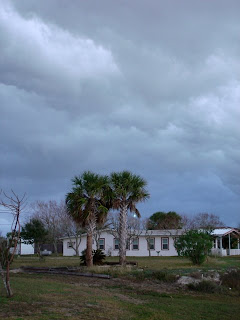 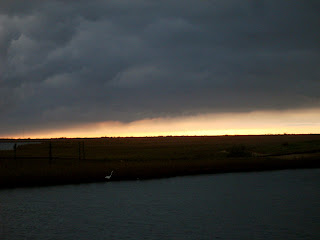 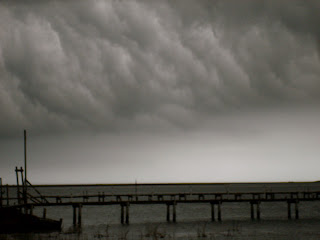 Exciting times in Powderhorn, TX!
Posted by A couple of newer paintings 2019 at 5:07 pm No comments:

The Day After Christmas

Thank goodness the fog blew out today! That meant no headache for me. So I guess that's what's causing them. Our day was spent much as usual. It was 66 (19C) when I got up and it made it's way up to 81F (27C). There was a bit of rain this morning just as I was getting up but not enough to keep me from my exercise! By the time breakfast was over the sun had come out so after my morning internet, I sat outside and read.

This cardinal was hanging around as I was reading. If you've been reading my blog for a while you'll know that we've decided my Mom has come back to earth in the form of a cardinal. I saw one the day before Christmas and then today so she's watching over me down here in Texas. 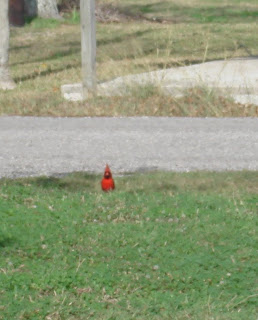 Yesterday there was a young pelican standing on the deck at one of the RVs looking in their door. They thought he might have been hurt or sick and sure enough, today he's dead. Poor little pelican!

Gordon came out just before noon and wanted to know if I wanted to go for a drive so after we had lunch we set out for Goliad. It's supposed to be an interesting little town but the sun started to go away as we were heading toward Port Lavaca so we canned that idea and just went into Port Lavaca, filled up with diesel at 1.99.9, found a chiropractor so I wrote down his information in case we need it in the future. We also went into Walmart to look at camera cards as the nice FedEx man will be bringing me a new camera soon and Gordon a new lens. These are coming to us from Gordon's Paypal account and sales of his photos. I'll give you details of the camera when I receive it.

From there we took the scenic route home through Magnolia Beach and along Matagorda Bay, into Indianola and then home where I sat outside again and read, then came in for a nap.

The end of another beautiful day on the Texas coastal bend!

This roseate was foraging for food at the end of our pier this afternoon. 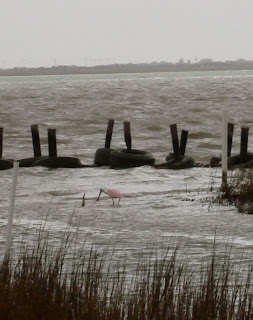 Dark sky and sun shining on the waters of Powderhorn Lake.

I borrowed this from someone else's blog: 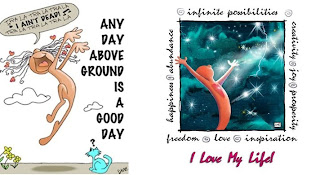 I had too much pecan pie today!
Posted by A couple of newer paintings 2019 at 6:06 pm No comments:

I awoke again to mild temperatures with no wind but cloudy and foggy again. This morning was just getting everything ready for the potluck today, getting showered. I did go out for my walk and did my exercises first thing though.

We don't exchange gifts anymore, there's nothing we need and no place to put anything so why spend the money!

I looked up migraine and damp, foggy weather on google and it seems that some people are bothered by this kind of weather and it does cause migraines for some so maybe that's what I've been experiencing lately although it never bothered me before. The headaches don't feel like migraines I used to get years ago, not nearly as debilitating but they are annoying just the same!

Just before 1 p.m. we took the Cornbread Stuffing and ourselves to the potluck. We found that people here don't dress for Christmas so we were probably overdressed but the food was excellent as usual. We got home around 2:30 p.m. and I proceeded to read and have a nap. Gordon went out to see if he could find any photos.

Here we are by the Christmas tree in the rec hall.

I called home around 5:30 p.m. to wish everyone a Merry Christmas. My sister from Toronto, Betty and her husband, Garth had gathered at my younger sister, Margie's to be with her and their family.

Getting Ready for Christmas Potluck

This morning was absolutely balmy - 63F (17C) but cloudy. There was no wind for a change. I didn't have much energy this morning, probably from the stuff I've been taking for my headaches. The good news is that I didn't have one when I went to bed last night for the first time in a number of days. I only spent about 1/2 hour in the rv-dreams chatroom last night so maybe looking at this little screen for hours on end isn't helping.

Finally I got up and got to it and had it in the oven by about 2:30 p.m. I walked over to take the garbage to the dumpster and saw the great egret on one pole and 2 pelicans on two other poles. They sure are cute sitting there. 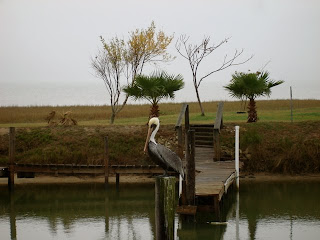 We had a bit of rain on and off during the day but nothing much. If it was snow it would probably hardly equate to a ground cover. I think 65F (18C) was our high for the day. The forecast for tomorrow is mild and cloudy again with a possibility of passing showers. I might be able to wear my sandals to Christmas Dinner. LOL!
Posted by A couple of newer paintings 2019 at 3:54 pm 1 comment:

Today was cloudy and warmer. It's 54F (12C) right now at 7 p.m. Central Time. I didn't have to bundle up for my morning exercise.

After breakfast, I got ready to go into Port Lavaca to pick up ingredients to make my Cornbread Stuffing for Thursday. I was home before 1 p.m. with that.

I have been feeling lousy with a headache and stomach problems (probably related to the headache medication) so when I got home I unpacked the groceries, took the cookies I had purchased over to the rec hall and then went to lay down for a nap. I slept for about three hours.

When I got up I got the potatoes peeled, cooked and mashed, got Gordon's dinner ready while he went over to the rec hall to pick up some gumbo that Delmer was making. Gordon can't eat it as it's roux based but that was my dinner. It probably didn't do my stomach any good but it sure tasted great! While I was doing that, I made two pans of cornbread, cut it up and toasted it in the oven. So I have a headstart on Christmas dinner!

I feel a bit better after my nap. Sure hope it continues!
Posted by A couple of newer paintings 2019 at 7:59 pm No comments: 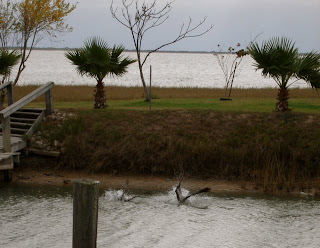 It was 35F (2C) this morning. I got up a bit earlier before a headache had a chance to form. We reached a high of 45F (7C). This morning we had some sun amongst the clouds although it was quite windy. I went for my walk/run, did my exercises, did my morning internet stuff then lay down on the couch and read for a while.

I also got our expenses calculated in Canadian dollars and entered onto my spreadsheet. Since my cornbread stuffing turned out rather well, I went over to the rec hall and put it on the whiteboard as my contribution to the Christmas potluck. Now I just hope it turns out well again! The biggest problem with making stuff for potlucks is not having the proper dishes. Consequently I like to use the crockpot, however I think this fare will be made in foil pans. Easy clean up!

While I was out, two pelicans were doing their swan dives into the water. They are so funny to watch. It's almost synchronized.

I added Cross Country Adventures to my sidebar. David and Lise Jennings are also from Ottawa and we'll be in the same RV park when we return to Ontario in April so we'll get to meet them then. They go to Arizona for the winter, specifically Apache Junction. They like to hike and go out a couple of times a week it seems. So if anyone's looking for another blog to read, check them out.

Since I didn't do much today, I'm just jabbering away! So enough already!
Posted by A couple of newer paintings 2019 at 3:13 pm No comments: 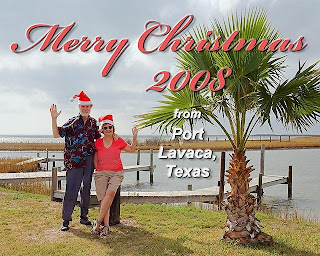 Gordon made some changes via Photoshop to our Christmas card. Can you see three changes from yesterday's card?

Today was very windy and colder with a high of 52F (11C). I got up later than usual as I could hear the wind outside and knew it was colder but up I got and bundled up for my walk. It actually didn't seem to be as cold as it was but the wind was really strong. I woke up with a headache. That's what I get for staying in bed longer than usual. Sometimes my walk will clear it but it didn't today so I took a Tylenol with my breakfast and it mostly went away.

I spent some time this morning chatting on Facebook with Dee. Her blog is Tumbleweed.
.
This afternoon I decided to make some Cornbread Stuffing. I was thinking that I would make it for the Christmas potluck here at the campground but I wanted to put mashed potatoes in it to make it more substantial but couldn't find a recipe so decided to wing it. I also added some bacon as I didn't have any giblets. It turned out really good but it's pretty labour intensive. I baked some chicken for dinner as well as it's far too windy to use the barbecue today.

My younger sister, Margie called today with some bad news. My aunt Ruth has not been well and is now in St. Vincent's Hospital in Brockville, Ontario awaiting placement at a nursing home. She really didn't want to give up her apartment but the time has come.....

My headache has also come back with a vengeance this afternoon but after sitting on my massage cushion for 15 minutes and another Tylenol it's a little better. I really hate headaches!
Posted by A couple of newer paintings 2019 at 3:22 pm No comments: