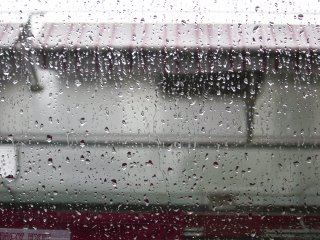 Raindrops on my window
Today was a very lazy day. Having had back problems all week, I’ve resorted to taking ¼ muscle relaxant at night making me groggy in the morning so I read and slept till about 1:00 p.m.

Then while having lunch I turned on the TV to find “The Man With One Red Shoe” with Tom Hanks so we watched that while surfing the internet. Then we watched “Ghost” with Patrick Swayze, Demi Moore and Whoopi Goldberg. Definitely a TV day!

I’m also reading the blog of a family with two kids who have a website called “Away We Go”. They bought a motorhome in July 2005 and are home schooling their two boys. Each state they go to they visit the capital for a history lesson. It’s an interesting blog complete with lots of photos. If anyone is interested, here’s the link: http://www.awaywego.us

I did my walk this morning despite the rain but was pretty wet when I got back!
Posted by A couple of newer paintings 2019 at 6:21 pm No comments: 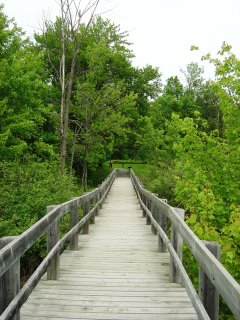 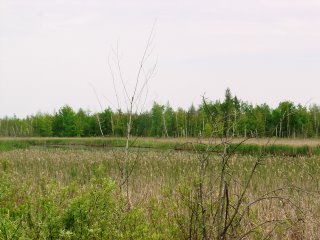 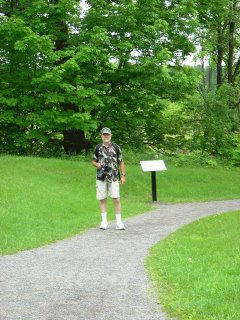 Gordon on the Mer Bleue pathway
Not much happening today. This afternoon we did take a drive to the Mer Bleue Conservation Area which is off Anderson Road in the southeast end of the city. We took Bib with us as he was itching for a change of scenery. When we got there, no dogs were allowed. Sure wish they had posted that on their website. I walked him around the parking area while Gordon went to take some photos. Then I put him in the truck and took a quick trip down to the boardwalk to see what I could see. I didn’t go far as I didn’t want to leave him in the truck although it was parked in the shade.

Mer Bleue is a major element of the Capital’s Greenbelt. It is first and foremost a huge acidic peat bog but it is also a series of marshes and sand ridges that provide a habitat for many aquatic birds, so the National Capital Commission out of concern for the survival of the fragile ecosystem has designated it as the Mer Bleue Conservation Area.

We didn’t stay long as it was cloudy and not a really nice day for photography.

Photos above were taken at the Mer Bleue Conservation Area. The boardwalk is one kilometer long. I would like to go back and check it out but will have to leave poor Bib at home!

Oh, and Gordon's White Sands Gallery is still #1 on pbase!
Posted by A couple of newer paintings 2019 at 9:09 pm No comments:

Today was humid but not as hot so we didn’t use the air conditioner, just the fantastic fan and our two fans so it was quite pleasant in the RV.

I went out for groceries this morning and had to have my glasses adjusted so went to WalMart in Barrhaven. They have also opened a Food Basics there so got my groceries.

I was back home around 2:00 p.m. My afternoon then consisted of reading and napping.

Tonight we were invited to our former neighbour’s house, Bridget and Jim. We hadn’t seen them since we moved out of the house in 2004. They are getting ready to pack up and move back to British Columbia for the end of June. They’ve been in Ottawa for three years and don’t really like it here so when their landlord told them they had to find a new place as their son wanted to move into the house they decided now was the time to pack up and go back to the west coast.

Last Day of May 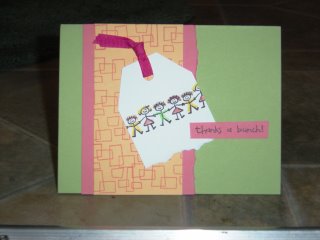 Photo today is of a hand made thank you card that Gordon’s daughter, Michelle made for us. It’s a very pretty card. She showed us some that she had made when we were in Ohio and she’s doing a good job. She also does scrapbooking and this ties in with it. Don't know where she finds the time with three kids!

Today was another hot, humid day. I decided to get the laundry done anyway. The laundry room in the campground is located at one end of a concrete shed. It’s very small holding two washers and one very large gas dryer and a folding table. There’s little room to even sit in there so I sat outside in a lawn chair. It was quite pleasant as there was a breeze so it wasn’t too bad until you start unloading the dryer. That done, I actually set up some towels on the counter in the RV and did some ironing. I must be nuts! We do have the air conditioner on and it makes a lot of difference. It was 23C (73F) in the RV at about 5:30 p.m. and it was very cool. In the house that would have still felt warm.

This afternoon, after my ironing, I lay down on the couch to read and fell asleep for a while, then worked on the computer getting May expenses updated, then sat outside and read for a while till I started to hear thunder. Our thunderstorms here in Ontario are nothing like the one we had in Branson, MO. Thank goodness! That kept me awake most of the night. Usually I sleep through the thunder storms we have here.

We did okay for the month of May but June and July will be a total washout with a birthday, a wedding etc. and also our campground for June is more expensive.
Posted by A couple of newer paintings 2019 at 8:26 pm No comments:

Today was very hot and humid but there was a slight breeze so it wasn’t too bad.

I left around 10:30 a.m. to go to the periodontist. My appointment was for 2:30 p.m. but thought I would look around some before my appointment. I went to Bayshore and picked up a prescription and then to Carlingwood and looked around there before heading to Westgate which is right beside the periodontist’s office.

I actually had my teeth cleaned by the man himself as his hygienist is on disability. He suggested that while we’re away I should consider having my teeth cleaned as having it done twice a year instead of four times a year which I had been doing prior to our nomad lifestyle apparently isn’t cutting it.

On my way home, I stopped at my sister’s to pick up our mail and have a chat.

When I got home I found out that Gordon had lunch out with the guys. They came and picked him up and went to the Greek Souvlaki House at Baseline and Prince of Wales.

For the third day in a row, Gordon's White Sands Gallery is #1 on pbase!

That about covers today. Again, no photos.
Posted by A couple of newer paintings 2019 at 9:30 pm No comments:

It was very hot today. Even when I went out to walk this morning, it was showing signs of being a hot one. So, I took advantage of it by sitting outside under the awning and reading my book. Late in the morning we went to Superior Propane to get our propane tanks filled. They wouldn’t fill the small one that we use with our BBQ as it had a broken weld on the collar and they wanted $90+ to replace it so we decided against replacing it. Instead we went to Canadian Tire and got some propane bottles. They are easier to carry around. We also stopped at the post office and the bank and then came home. Back out to my lawn chair.

We did turn on the air conditioner today before we went out and it did a pretty good job but at 30 amp service we’re just borderline on being able to run it and anything else at the same time.

We got our reservations at Tranquil Acres firmed up for a month beginning July 11th.

Gordon is still #1 on pbase. He’s very proud of that!

No photos for today.
Posted by A couple of newer paintings 2019 at 8:00 pm No comments: 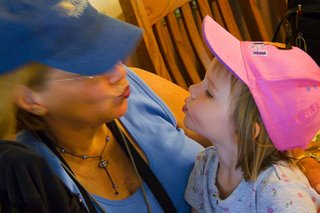 As far as I’m concerned, he’s always Number 1 but his White Sands Gallery is now #1 on pbase (that's worldwide)!

Link below to his White Sands Gallery:

Happy 3rd Birthday Faith! Photo of Grammy and Faith doing kissie face when we were at her house in April.

We spent a lot of this morning trying to decide our itinerary for the rest of the summer and I think we’ve got it down now to the beginning of September. Most of the time will be spent here in Ottawa but we plan to spend a week in the Upper Canada Village area, a month at Tranquil Acres near Carleton Place and a month in Lindsay, ON and from there probably go to Pt Pelee area for a while before coming back to Ottawa to get things ready to head south again the last week of October.

Sat outside, read, tried to get through all the magazines that we got over winter. We don’t have them mailed to us because of the cost. Sure wish these RV clubs would put all their magazines on line instead of sending them to us!

When I finished with the magazines, I took some over to the laundry room and was talking to a lady from Houston, TX. They have been in the park for a couple of weeks in their Class B. They call themselves ‘sunbirds’ as they follow the sun but their purpose is to get away from Texas’ summer heat. They plan to spend July and August in Nova Scotia.