Yesterday after I posted, Gordon broke out in a rash. We're not sure what its from but the doctor has taken him off his antifungal medication for a week and then he's going back on the medication he was on at the beginning. Luckily we hadn't picked up the order for another month's supply at $1146.00 although I had ordered it yesterday. I called them this morning and canceled it.

Today started out as a beautiful sunny day. I was up early as we had a chiropractor's appointment this morning. I cut my walk short so I could get ready.

After the chiropractor's appointment we stopped at Andrew Hayden Park and took some photos. The baby geese sure are growing up! We were both hungry at that point so we stopped at Bayshore Shopping Centre for something to eat, Gordon at Taco Bell and me at Subway. 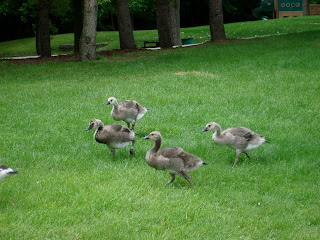 These kids were catching frogs and then literally throwing them back. 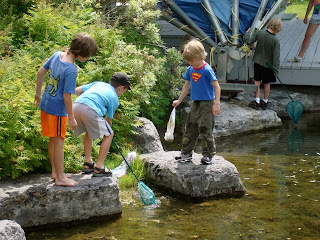 A lot of baby geese swimming in the pond 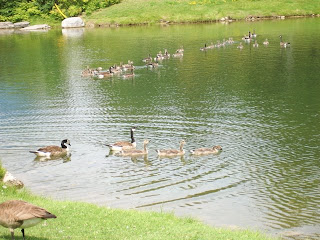 Our plan had been to go to the RV Show that was being held at Scotiabank Place (home of the Ottawa Senators) so away we went. I had thought it would be inside but after checking at the ticket booth we found it was out in one of the parking lots. We got parked and a lady in a golf cart picked us up and took us to the fifth wheels. There were 750 RVs there so it was spread out over quite a distance. It was nice to get a ride. She took us to the Titaniums first. Our main objective in doing this was to see if we could find something that we liked that was lighter in weight. The Titaniums were all heavier, even the smaller units but they sure were gorgeous! We looked at all kinds of fifth wheels but have to say even though ours is almost four years old, we still liked it better than most of the new units we saw (except for the Titaniums). Guess we bought the right one in the beginning! We were there for a couple of hours and were very tired when we got home so it was nap time!

Some of the RVs at the show 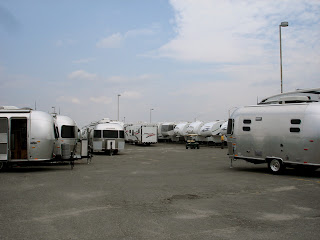 This little Wazat looks cute but basically only has a single bed in it and not much else. 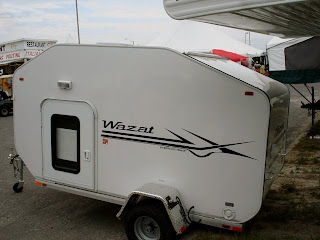