Pizza and Our New Sewer System

Since I had eaten lunch out yesterday, I don't eat a big dinner at night so I thought this would be a good night to make a pizza for my husband. Pizza is one thing he misses since he was diagnosed with celiac disease. Prior to leaving Ottawa, I had purchased a pre-made pizza crust. He prefers sauce, lots of cheese and oregano so it's pretty easy to make. Here's a picture of the pizza and my husband enjoying it: 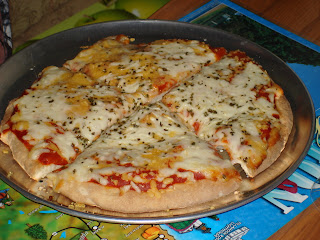 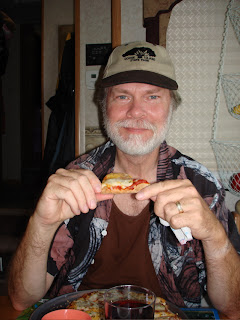 After dinner we went for a walk around the park and saw these beautiful clouds with sun rays. 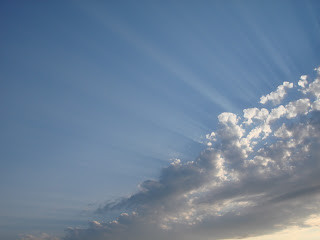 This morning we didn't do much but we got a call from Peterborough RV early this afternoon saying that our sewer hose system had come in so we went in and picked it up. On the way back we drove around some of the side roads and stopped at a Conservation Area off Mount Horeb Road called Windy Ridge. Gordon walked it with his camera and said it was quite pretty. Since I'm still having breathing problems, I stayed in the truck and read.

When we got home, Gordon set up the new sewer system and used the slunky to hold it instead of the eavestroughing we purchased so the photo I promised you isn't exactly as I expected. So far the slunky is working okay. It just falls over when you pick up the hose to empty it but since we're leaving it there, all is okay. I still don't think it's a wise investment for anyone thinking of purchasing one. 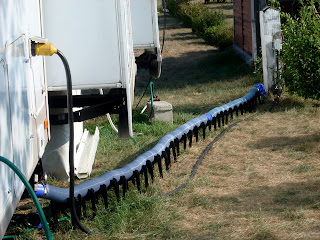