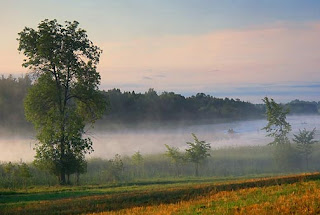 This is an early morning photo taken by my husband
This is the first cold I've had in over two years! A couple of days last week when I was having particularly bad reflux I neglected to take my Vitamin C so this is the result! Consequently I spent a lot of the day sleeping, only getting up just after 3 p.m. to have a shower and get some things done.

We were supposed to have breakfast with my sister and her husband at a restuarant in the little tourist town of Bobcaygeon but I called and begged off. My sister has a cold as well and she actually went to Emergency on Wednesday with a fever but it's only a virus so will go away eventually on its own.

We have two RVs behind us. Each has two little boys ages probably 6-11. They have spent the day running through other people's campsites including ours and the park model next door to us. Don't parents teach their kids camground rules? I don't mind well-behaved kids but these have been fighting and yelling all day!