We left at about 10:30 a.m. under cloudy skies and 66F (19C) however we weren’t very far out of when Gordon looked at the thermometer in the truck and it had climbed to 83F (28C). Our drive was under partly sunny skies until we were nearly at then it was sunny and still 83F (28C). We arrived at after just over a 2 ½ hour drive and got checked in. We’re finally got finished setting up around 3:30 p.m. It seems the farther south we are the more difficult it is to find the Starchoice satellite but we finally got it and we have TV and internet again. We’re here at the State Park for a week and while we’re here we’ll check out campgrounds at Port Aransas and/or Rockport to see where we’ll be over Christmas and New Year’s.

I got an email this morning from Amazon.com stating that I had ordered something from them at a cost of nearly $2500.00. Since I hadn’t, it freaked me out and although it said that I had ordered it on a credit card, it didn’t say which one so I proceeded to call my credit card companies and check this out. None of them had authorized that amount so I called Amazon and was advised that the account number I had from my email was not theirs. I was told that they were aware of this scam and were working on it and not to worry about it so if anyone gets an email from info@amazon.com stating that you’ve ordered something, it’s best to call Amazon and check.

After we settled in, we took a walk down to the beach – see me pictured below. 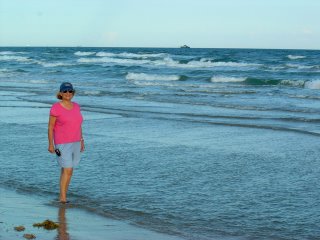 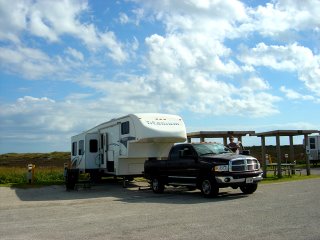 Our site at Mustang Island State Park
Posted by A couple of newer paintings 2019 at 6:19 pm