Can you believe a month from today is Christmas? It just doesn’t seem like it with all the sun and nice weather. Even with the Christmas decorations in the downtown area when you’re brought up with snow at Christmas, sun and heat don’t do it for me. Not that I miss the snow and cold weather at all!

I called and they have lots of openings contrary to what it showed online and staying a week didn’t appear to be a problem. So I guess we’re going there tomorrow. It will be nice to be so close to the ocean (gulf).

Gordon went out this morning to do a last run at photographing the Missions and when he got back I went in to WalMart and H.E.B. (a grocery) to pick up last minute things before heading out tomorrow.

Last night they had a lighting ceremony on Riverwalk to turn on the Christmas lights so we decided to go tonight instead hoping there would be less people. NOT! The place was packed. It was such a beautiful mild evening we decided to have dinner at one of the restaurants along Riverwalk. Most were lined up with a 40 minute wait but one restaurant was getting them in and out and we only had about a 3-5 minute wait. So we had dinner at The Original Mexican Restaurant & Bar. I had a salad and I have to say that the Asian salad I had for lunch at McDonald’s at half the price was much better! However the atmosphere was much nicer on Riverwalk so we took some photos and looked in some shops and enjoyed the beautiful weather!

Below are some of the photos I took this evening. 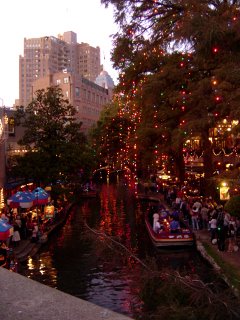 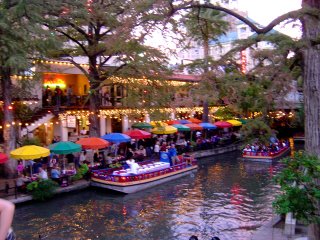 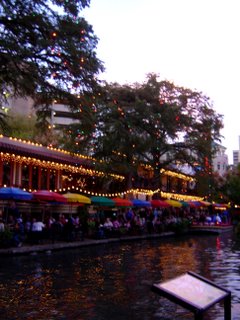