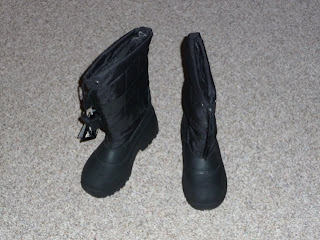 It was ccccold this morning with a wind but it's going to get worse so I'd better get used to it!

After my walk and breakfast, we decided to go over to the flu clinic that's close to us to see if Gordon could get his H1N1 shot. The sign said they were full for today so we'll try another day.

So, we went shopping for winter boots for Gordon (photo shown). We went to Tootsie's first. They had the same boots that he had before we started our odyssey however we decided to continue looking so we stopped at Mark's Work Wearhouse. Their boots were really expensive. So off to Sears. They had 40% off boots. Gordon found a nice pair that are rated for -50C (-58F) so he's all set.

While out we picked up an extra large double double coffee for Nancy, 2 timbits for Max, a small black coffee for Gordon and a boston creme donut for me at Tim Horton's.

I had a long nap this afternoon. The sun we were supposed to have this afternoon didn't materialize. We had planned to go and do a trail if it did so it was a low key afternoon.
Posted by A couple of newer paintings 2019 at 5:07 pm