After posting my blog last night we went out for a little drive around the area. Here are some photos. 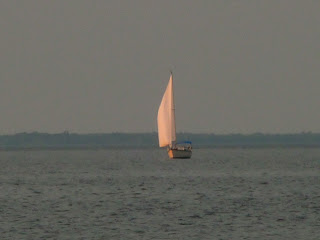 Sunset over the fields 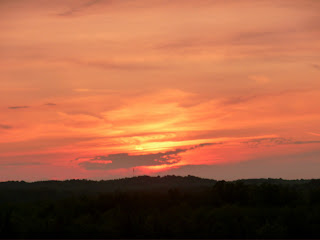 I had opened my window when I went to bed last night and woke up shortly after 1 a.m. to rain so I got up and closed the window and fell back to sleep only to wake up to more rain and so it continued. We had a lot of heavy rain and it knocked out the satellite for quite a bit of time. It was a great day to rest! We’ve been on the go so much the last month that it was nice to take the day off. I was totally fed up with getting to a new area and then having to spend our time traveling to the next area that we wanted to be in to try to find a campground. Ontario campgrounds leave a lot to be desired!

We try to look at a campground around here before we take the RV to it. Some of the ones we’ve seen if we had just gone ahead with the RV we would have had a heck of a time getting out of it.

If anyone is looking at going to the Georgian Bay area with a big rig, I would recommend staying on the Bruce Peninsula. We didn’t have a problem finding a campground there.

Anyway, we both really like our site here at Heidi’s. Our site is private the way it’s situated and we have trees, we’re just not surrounded with them. Most of the sites here are seasonal sites and each site has trees on both sides of the rig so they are very private but most wouldn’t work for us. There’s something to be said for aircards although we wouldn’t have had internet in most of the places we’ve been the past month as we had no cell service. We’re now back in the land of the living with our cell service back. Not that I care much about cell service. I hate talking on the phone! I’ll bet my parents wished that I had hated talking on the phone as a teenager! What did me in was being a claims adjuster. You just always knew that when the phone rang, it was a problem.

It really really rained until late afternoon so I hemmed a couple of pair of Gordon's pants that I had been putting off and then had a long afternoon nap. I had taken a Benadryl for my eye allergies so it made me really sleepy.

The sun came out after dinner. That was a pleasant sight!
Posted by A couple of newer paintings 2019 at 7:00 pm