Well, we reached (65F) today from a low this morning of (51F). I stayed in bed longer than usually as it kept raining on and off, finally when I got up it had stopped but I took a small umbrella with me just in case as the rain I'd been hearing on the roof wasn't just sprinkling.

I didn't do much today, spent time on the computer, read and had a nap and went for a walk around the campground when the sun finally came out late this afternoon. Here are some photos.

Water droplets on a leaf 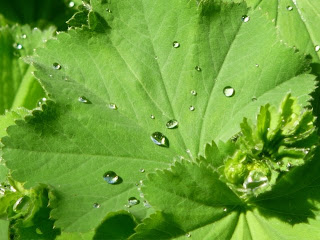 Clouds above the horse barn 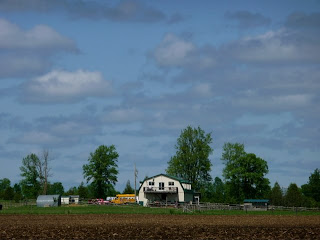 Boat by the river 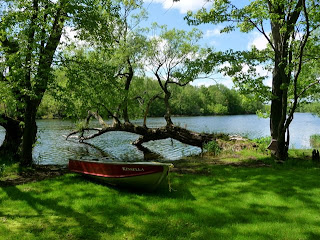 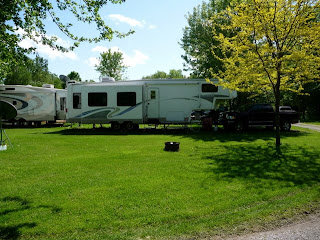 Since I don't have much going on here's another joke that a friend of mine sent to me titled:

Girl on a Plane

A stranger was seated

next to a little girl on the airplane

turned to her and said,

you strike up a conversation with your fellow passenger.'

The little girl, who had just opened her book, closed it slowly

and said to the stranger,

'Oh, I don't know,' said the stranger. 'How about nuclear power?'

'That could be an interesting topic'.

But let me ask you a question first.

Yet a deer excretes little pellets,

while a cow turns out a flat patty,

and a horse produces clumps of dried

grass. Why do you suppose that is?'

The stranger, visibly surprised by the little girl's intelligence

thinks about it and says,

To which the little girl replies,

'Do you really feel qualified to discuss nuclear power when

When I went out for my afternoon walk, I noticed that the campground were supplying hotdogs tonight at 6 p.m. so we decided to go over to see if there was anything Gordon could eat. We usually try to attend at least one food function when we're here in the summer to meet some of the people. It was a good turnout and the hot dogs were good but the homemade carrot cake was great! 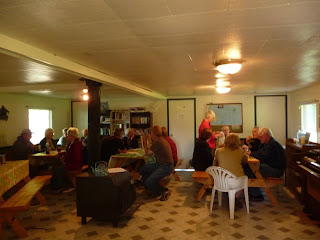