It got down to 10C (50F) overnight last night so when I got up Gordon had the electric heater on and his electric throw was on the couch. I didn't think it was that cold! It certainly was a beautiful morning for a walk though, no humidity and a light breeze.

Does anyone have a 'wish list'? I've been thinking about it and I've come up with a couple of items. I've never in my whole life had a pedicure and I think that would be fun. I almost went this winter but never did get around to it. I'd also like a couple of hours with a personal trainer. Although I walk every day, I don't think this is enough. I think I need some strength training. I'll have to think more on this but I thought it was a good start.

I had an order to pick up at Sears so I went out briefly this morning to pick that up, otherwise I was just reading my book although I did manage to finally get the vacuuming done.

Twice a year our financial advisor company, Canada Retirement Information Centre have a client appreciation party, one in the summer and one around Christmas. We only get to go to the summer party which are usually themed parties, today's being 'Mardi Gras'. 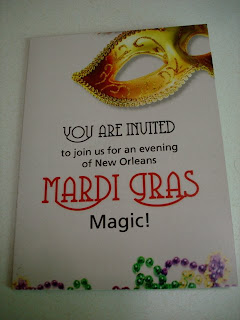 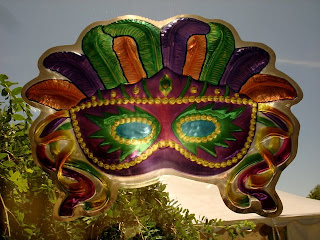 We arrived early today before it even started so we got a parking spot right out front and also got a table inside close to the band which were the Mumbo Jumbo Voodoo Combo. They have been around a long time and are quite good but where we were sitting we were getting blasted so we moved outside to the tent which is where we usually sit anyway.

Lineup at the bar 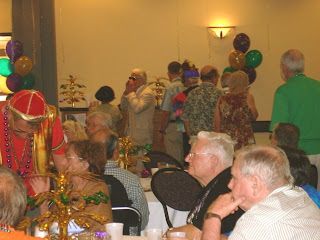 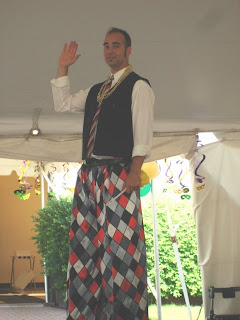 Our financial advisor, Franco was all dressed in Mardi Gras costume as was the lady who does our tax returns, Josephine. 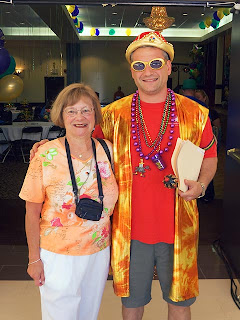 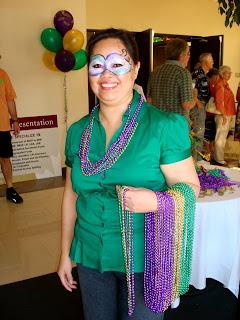 There were a few other couples that had dressed for Mardi Gras but most people just dressed normally. The booze was free and the food was good. I had one glass of wine and my reflux is now telling me about it.

One of the couples in costume 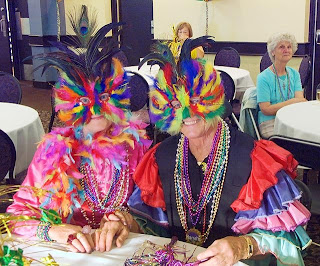 We left there around 4:30 p.m. and went to Gordon's favourite computer store, PC Cyber as he wanted another 500GB external firewire hard drive. We purchased that and while we were out in the west end decided to go to the Open Roads dealership who now sell Titaniums. The only one they had was a 39 ft so that wouldn't solve the problem. The salesman we talked to say that we don't need the Class A license and that it's only for commercial vehicles. We told him what the examiner said yesterday and he still says we're fine with our G license so he's going to get in touch with the Ministry of Transportation tomorrow and let us know. So now we're more confused than ever!