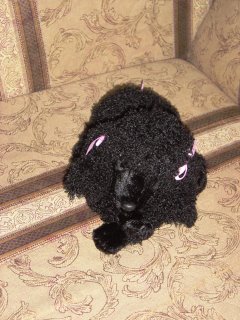 This is Bree. She might look real, but she's not! 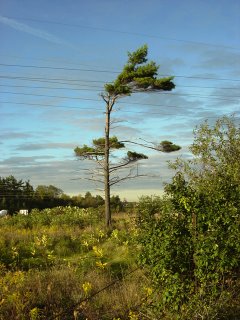 This is a photo I took on my walk this morning. It's pretty even with the power lines!

Another beautiful morning for walking. Last night Gordon had to fast as he had blood work to be done this morning. He has also had a tooth that’s been bothering him so we went to his dentist’s office and she fit him in. He had the tooth removed and has to go back on Thursday when the dentist will take his lower denture and have the new tooth put on so he can pick the denture up Thursday afternoon.

I didn’t say much about my new poodle (stuffed) last night but Danica got me the poodle so I wouldn’t be lonely for Bib. She tried to get an apricot one but wasn’t successful. This poodle is black and has pink bows in her hair so we have determined, it’s female. Last night when I was thinking about it, I kept thinking ‘Breeze’ so I’ve decided to call her ‘Bree’ not after the character on Desperate Housewives but because of the breeze (like wind). She’s so cute and cuddly and you don’t have to feed her, walk her or listen to her whine. However, she does make a lousy watch dog!

This afternoon the sun was shining and there was a breeze so I sat outside in my lawnchair in the sun and read for a while. It was actually quite hot in the sun. Late in the afternoon I went for another walk with my camera. I took some photos but none that were great.