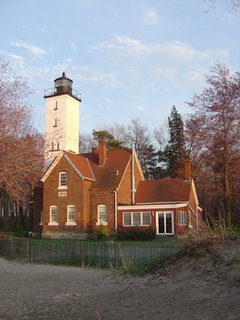 Presque Isle Lighthouse near Erie, PA AKA The Flashlight 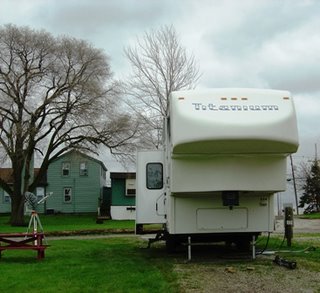 Hills Family Campground near Erie, PA
It was supposed to rain in Columbus this morning but we woke up to mostly sunny skies and the mid 50’s. We left Alton RV Park around 9:30 a.m. and headed north on I-71. As we approached Cleveland, the skies clouded over and it started to rain. It never rained really hard and once we left Cleveland behind it didn’t rain much after that although it’s cloudy and as we arrived in Erie, PA, it’s 41F! I want to be in Arizona!

Also just before we reached Cleveland we were in a construction zone with a concrete barrier on one side and very narrow lanes when this yahoo (not the search engine) in a semi starts cutting us off pulling into our lane. Luckily Gordon wasn’t asleep at the wheel. It could have been nasty. This idiot continues on and all of a sudden pulls left across four lanes of travel and almost hits a car traveling in the passing lane. I suggested to Gordon that we steer very clear of him and was hoping that he would continue north into Cleveland but he got off on I-271 (Cleveland bypass) however he did pull into the first rest area, thank goodness!

We arrived at Hills Family Campground around 2:00 p.m. and were set up by 3:00 p.m. As you can see from the photo of the park above, it is nothing special but the sites are large and they have 50 amp electricity and 69 cable channels.

When we got here it was only 54F inside the RV so between the furnace and the electric heater after about 1 ½ hrs it was 65F, almost comfortable.

We’ve decided to stay here for 2 days as we don’t have to be at Gordon’s friend’s place until Thursday and neither of us have seen much of Erie. They actually have some lighthouses at Presque Isle and a State Park on a peninsula that sticks out into Lake Erie. We’re also here for 2 days because neither of us like to pack up and break down and only stay one night. We do it when we have to but since we don’t have to, we’re staying!

After dinner, we drove out to Presque Isle State Park to see their lighthouse. The locals refer to it as ‘The Flashlight’. It was built in 1873 but is now fully automated and maintained by the Coast Guard. It stands on a sand spit peninsula that juts out into Lake Erie.
Posted by A couple of newer paintings 2019 at 8:57 pm