Our Trip to Bisbee, AZ 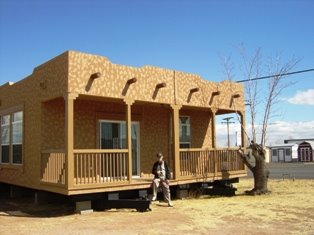 Today we headed toward Bisbee, AZ. Neither of us could remember why we were supposed to be going there but knew someone had told us not to miss it. While going through Huachuca City, we stopped to look at a double wide modular home that we had seen yesterday. It was VERY nice and only $109,000 US. Photo is of Gordon sitting on the front verandah.

On our way to Bisbee we were rerouted due to an accident which we later found out was a propane truck that had overturned either in the tunnel at Bisbee or near the tunnel. The report we heard is that they were waiting for it to explode!

We reached Bisbee in a roundabout way and at first couldn’t figure out why this place had been recommended. We drove further and were stopped again by Department of Transport indicating there was an accident ahead and we could not continue on SR80. They let us go through to the Tourist Information and there saw the ‘open pit mine’ (copper). The lady at the Tourist Information recommended that we go in to Old Bisbee.

Bisbee was founded in 1880 and at one time 24,000 people lived there. It is considered one of the best turn of the century towns in Arizona. It is mainly narrow streets and old buildings which are now shops and galleries and expensive! We walked around for a bit and then returned through Sierra Vista as SR80 was still closed and the information I heard in town was that the road would not be opened before tonight. We’ll have to watch local news to see what happened.

It is quite cold and windy today, only reached 52F. When it started raining about 3:45 p.m. it actually looked like ‘sneet’. Only lasted for a few minutes, thank goodness.

With the rain and sun, Gordon went off in search of rainbows. We were hoping to see one on our way back from Bisbee but the conditions just weren’t right. He didn’t have much luck this time either.

On the local news the propane truck was the lead story. Apparently the truck ran off the road and 80 ft down an embankment. It’s too far down for another truck to siphon off the propane so they have hooked up a hose of some sort and directed the propane that they are siphoning off away from the rig and burning it. They figure it will take 18-24 hrs to complete the job. Luckily the driver was not injured. The cab burned but not the tanker, go figure. What luck!
Posted by A couple of newer paintings 2019 at 8:18 pm