On to the Sedona Area 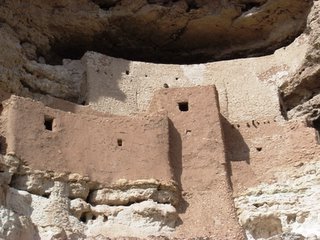 After yesterday’s cloudiness and last night’s extraordinary sunset, today dawned bright and sunny in Mesa. We only had two cloudy days in the three weeks we spent in Mesa.

We got packed up and were leaving the park by 9:15 a.m. and got through Phoenix by about 10:10 a.m. There was a lot of traffic northbound on I-17 just on our way out of Phoenix but that was only for a short while then it cleared out. We stopped at a rest area at Sunset Point and took a couple of photos but other than that the trip was good. We arrived at our campground, Distant Drums RV Resort at about 11:45 a.m. and got set up in good time. Distant Drums is a new resort, 2 years and 4 months old and unlike Mesa, we’re back in the country so it’s only a short walk for sunset shots.

After that we drove into Camp Verde to have a look at the town. It looked very much like we thought a western town should look and we’ll probably take some photos of it another day. We then returned home and I read some of the literature that we picked up at the Chamber of Commerce in town and had a nap.

We walked out to the vacant land beside the park (I think it’s their expansion area) and took some photos of the sunset. It wasn’t as impressive as last night’s and my battery was about to give out so I came back and took Bib out for a walk. He hasn’t wanted to go outside much when in Mesa due to all the noise so he seemed quite keen here.

Tonight it’s hamburger stew for dinner and TV.
Posted by A couple of newer paintings 2019 at 8:54 pm