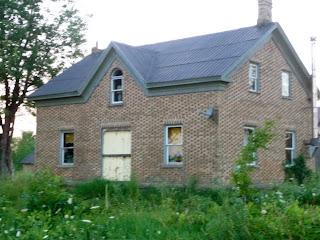 After posting we went for an evening drive. Gordon had found more evidence of the Wolford name in the area. There's a Wolford School, a hamlet called Wolford Centre (just a couple of houses) as well as the Wolford Chapel.

We saw this old house that had very interesting brickwork. It looks like dots. 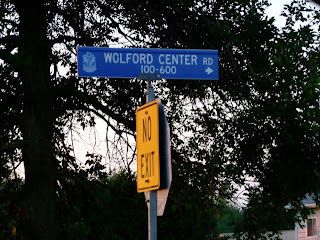 We had some rain this morning and it was very hot and humid. It was 22C (72F) when I woke up shortly after 5 a.m. after a restless sleep but with the humidity it was already 30C (86F). After I got up shortly before 8 a.m. we had a few claps of thunder in the distance and then the system moved out.

Shortly after 10 a.m. the contractor arrived with a truckload of materials and he and his helper started on the deck. I don't even them building the deck in this humidity!

I had wanted to go out to pick up some groceries and stuff but I kept putting it off as I woke up with a giant headache and felt generally blah.

I did go out for groceries but didn't go to all the places I wanted to go.

After lunch I had a nap and felt a bit better although my shoulder is still causing grief.

When I woke up the guys had gone. The bottom step was the only one that had disintegrated badly and they're having a problem demolishing the other two (photo below). It's very hot work! 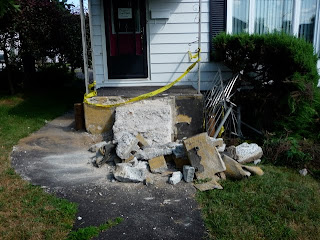 Gordon and I went out and I picked up some flooring at The Real Deal for $2.00 to go in front of my washer and dryer. The concrete just wasn't working for me. Then we went to Canadian Tire to find something to kill all the bugs that are crawling around on our back patio. Apparently this is a terrible year for bugs.

When we got home Gordon tried to vacuum up the debris along the patio with our little shop vac but that didn't work so he did the best he could getting rid of it before we sprayed the bugs. Hopefully that will discourage them for a while. While out we also stopped at Victoria Park, our municipal RV park and I took a few photos. From a distance it looks like they're really packed in but there is a pretty good distance between them. We've been in much closer quarters (thinking back to the Prince of Tucson)! 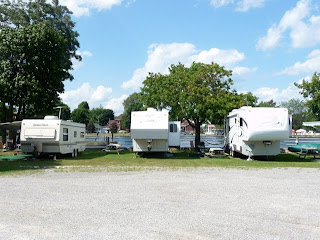 I slept better, thank goodness but I did have Immigration dreams. I didn't walk again as I wanted to get ready to go out for the garage sales this morning. After breakfast we headed out. We went to quite a few but there was a lot of junk and a lot of overpriced stuff that I might have wanted so I bought a blender for $3.00 and a couple of lawn chairs for $1.00. These are light enough to carry.

When we got back from the garage sales, Gordon walked over to the Canal, Railway and Chocolate Festival at Centennial Park. It's mostly for kids but he wanted to take some photos and I didn't feel like walking that far with my shoulder problem. It was also still pretty hot even though there was quite a strong breeze so instead I sat outside on my swing and read and even weeded and watered my little petunia bed.

I had a long nap this afternoon. It was a very deep sleep and difficult to wake up.
Posted by A couple of newer paintings 2019 at 10:45 am