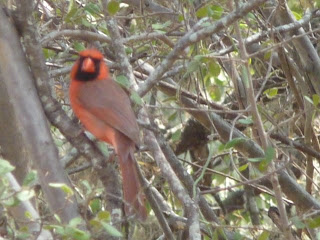 I've felt really tired and sort of 'off' for about a week but just noticed it Sunday so blamed it on the time change. But thinking about it, I've been eating a lot of foods that I shouldn't be so I'll have to get back on the reflux food bandwagon and behave myself. It's also been mostly cloudy and dreary the last few days which doesn't help any. At least it's been warm but that's about to come to an end at the beginning of the week.

The cardinal photo on the left was taken on Sunday at Enchanted Rock.

My day today started out with 66F (19C) but very dark, cloudy and humid. I didn't bother with the camera today and didn't see anything while I was out that would have warranted it. The next few days are going to be cloudy with a high chance of rain. They really need the rain!

We had discussed moving to Fredericksburg tomorrow but with the weather forecast we decided to stay where we are so first on the agenda was to go to the office and sign up for another few days.

After that I got ready to go into town. On the way in I stopped at a really neat store called Gibsons. They sell absolutely everything (not many groceries). It was a neat place just to poke around in. Then I stopped at the mall but didn't see anything I liked better than my money. Ditto for Big Lots and Dollar Tree. I stopped at HEB for some groceries with a final stop at Walmart then home! 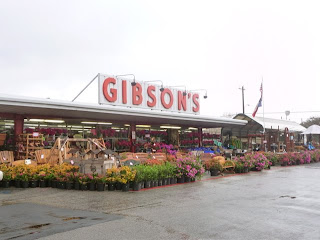 This big chair was across from HEB at the Dodge Dealer. 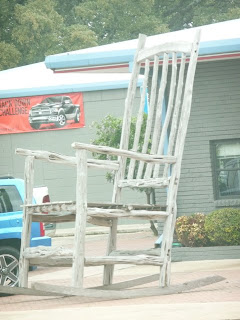