End of December Expenses and Just Another Day in the Texas Coastal Bend! 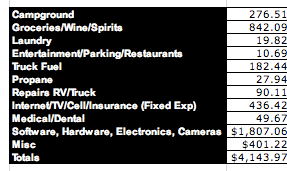 Ok, so the total for December is not so good. I definitely overspent on the groceries category probably because we're so far out of town that I don't want to have to go back in to pick up a couple of things so I overbuy. That total also includes mostly everything I buy at Walmart and HEB so there are some things in there that should be in Misc. category but with all the calculations, I'm leavin' it as it is!

We also purchased the new lens and camera. This did not come out of our funds but out of Gordon's Paypal account from the sale of his photos. Taking off the 'toys' we came in at around $2300 Canadian for the month which isn't too bad.

We did get our December electric bill and ours was $76.57 so that needs to be added to the campground fees although I haven't paid it yet. We did have some cold days during December using the electric heater and I've been heating all our water on electric. I thought that was not bad for the month.

Enough said about that.

The wind started during the night. We had the windows open and it darn near blew me out of bed it was so strong at times! I thought it was supposed to rain this morning but I woke up to sunny skies and that's the way it continued through the day. The wind didn't let up either but we had nice 77F (25C) temperatures all day. It was already 70F (21C) when I got up shortly after 8 a.m.

Palm blowing in the wind 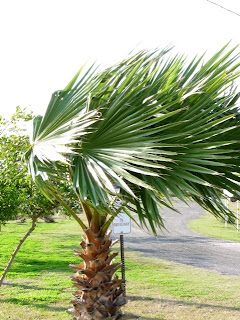 The only different thing I did this morning was to defrost the refrigerator. So, that's done for another couple of months. Other than that I parked myself outside in my lawnchair with my back to the wind and enjoyed about four hours reading and having the occasional bit of shut-eye.

The pull-thru site across from us is now filled. The people came in yesterday. They must be friends with the 2 RVs beside us because it has been wall to wall people there since they arrived. Not as quiet as it was! Hope some of these folks are just visiting for the weekend. I miss my peace and quiet!

Our RV from across the little bay 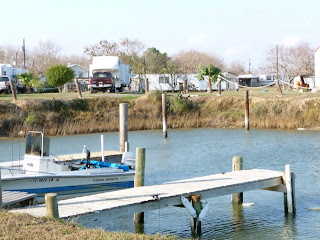 Other than a couple of jaunts over to the rec hall and around the campground, I stayed put today.

I had a question in my comments a day or so ago about whether this is a private or public park. It is a private RV park and marina and is family owned by Delmer and Bobbie Scott. Their granddaughter, Ginger is the manager.

Pyro came to visit near dinnertime 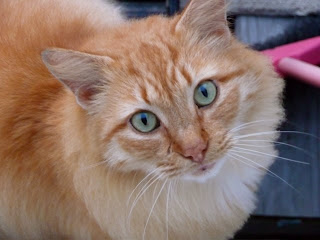 That about sums up my day here in the balmy Texas coastal bend!
Posted by A couple of newer paintings 2019 at 7:00 pm